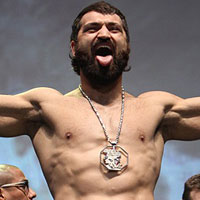 Photo by Dave Mandel
Arlvoski (above) is trying
to bounce back from
his loss to Fedor Emelianenko.
Andrei Arlovski vs. Brett Rogers

The Breakdown: The old guard runs headfirst into a man representing the supposed next generation, as former UFC heavyweight champion Arlovski (15-6) takes on the undefeated Rogers. While Rogers’ headfirst brawling tactics have served him well thus far, Arlovski made his name picking apart one-note bombers with uncommonly precise punches and fluid footwork. Unless Rogers (9-0) can turn this into more of a slugfest than a boxing match, he’ll have to rely on gutting out Arlovski’s offense and answering back with something that can put the Belarusian on the defensive.

The X Factor: Anytime Arlovski starts stringing together blows, his fans will hold their collective breaths, knowing full well that a single synapse-scrambling strike from Rogers could send their guy straight to the canvas. That’s the reality of the heavyweight division, and it’s always been a particularly cruel one for Arlovski, who has seen some of his best performances go unrewarded thanks to his notoriously fragile chin. Outgunned as he may be, Rogers needs only one of his bombs to land for this fight to turn into his coming out party.

The Bottom Line: Banking on an unproven prospect to take out Arlovski, porcelain beard and all, is a fool’s bet, especially when one considers the former UFC champion’s stumbles have always come against the division’s elite. Rogers doesn’t have anything Arlovski hasn’t already seen, and the difference in fundamental ability will be too great for the Minnesotan to overcome. Watch for a vintage showing from Arlovski, as he overwhelms Rogers early before putting him away with a highlight reel knockout.