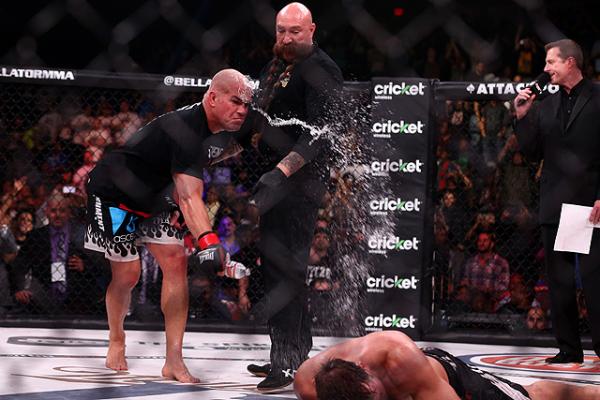 Tito Ortiz was one of the innovators of MMA trash talk. | Photo: D. Mandel/Sherdog.com


Now nearly two decades into a career that includes a UFC light heavyweight championship reign and more big-time matchups than most fighters will ever dream about, the venerable Ortiz is one of the pioneers of MMA trash talk. Ortiz’s fights with Chuck Liddell did some of the highest buy rates in the history of the Ultimate Fighting Championship, and his trilogy with Ken Shamrock also did huge numbers. The man managed to dominate the TV ratings with a Bellator fight against Stephan Bonnar -- in 2014.

All of that is a testament to Ortiz’s understanding of the fine art of promotion and of trash talk, in particular. He set up the first of his trio of fights with Shamrock by putting on a shirt that read “Gay Mezger is my bitch” after winning his rematch with Lion’s Den member Guy Mezger in 1999. He took shots at Bellator MMA light heavyweight and fellow trash talker extraordinaire Muhammed Lawal in 2014, calling him “a journeyman” and “a nonsense fighter” when there was no upcoming fight scheduled between the two. That is just Ortiz’s way.

Ortiz is not as polished on the mic as Chael Sonnen, nor is he a master of social media like some of his younger compatriots. What sets Ortiz apart is his ability to get under his opponents’ skin in a variety of different ways. Whether it is his verbal malapropisms or just his personality, in general, he rubs opponents the wrong way, and he turned that into an asset that has powered his long and lucrative career.

Number 7 » His long and storied career has seen more than its share of trash talk, and his mastery of it made even the highest-profile matchups feel even bigger. His reputation as a no-nonsense purveyor of the most shocking violence aside, the Brazilian legend’s mouth always added a little something extra to what his fists and knees already brought to the equation.
« Previous Sherdog’s Top 10: MMA Wrestlers Next Sherdog’s Top 10: Phenoms »