Breakthrough Fighter of the Year
By Jack Encarnacao ([email protected])

Whether he was delivering graceful spinning elbows or untamed carnage from the mount, Jon Jones left his mark in the sport, and on his opponents’ faces, in 2009.

Little known in the mixed martial arts world before his bout against Stephan Bonnar in January, the 22-year-old light heavyweight is set to start 2010 as a headliner for the second consecutive time on cable television against Brandon Vera in March.

The groundswell of buzz started in his fight against Bonnar at UFC 94, as the Endicott, N.Y., product threw Bonnar with an eclectic array of suplexes and also landed unorthodox elbows and knees. While he fatigued considerably toward the end of the three-round fight, it was his fits of dynamic offense and timing that proved most memorable.

Greg Jackson, who ended up bringing Jones into his lauded New Mexico camp toward the end of the year, remembers the atmosphere after Jones’ Octagon unveiling. 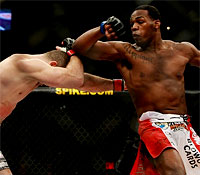 Dave Mandel/Sherdog.com
Sky's the limit for Jon "Bones" Jones.
“There’s this kid who nobody knew who was fighting Stephan, and all of a sudden he was throwing him all over the place,” Jackson said. “We were like, ‘Who is this kid?’”

That big-stage debut, followed by a submission win over Jake O’Brien and a dominant handling of Matt Hamill, locked in Jones as Sherdog’s Breakthrough Fighter of the Year for 2009.

In 12 months, Jones defined “putting yourself on the map,” so much so that he’s now on the short list of young fighters that fans, officials and observers quickly recite when asked who the sport’s future superstar and standard-bearers could be.

Jones had a hiccup against Matt Hamill on Dec. 5, a fight that got top billing on Spike TV and was looking like a signature performance. A national junior college wrestling champion, Jones hit a trip takedown that separated Hamill’s shoulder and left him prone for a violent ground-and-pound assault from the mount.

In his haste to finish, however, Jones switched from punches to illegal “12-to-6” downward-trajectory elbows that resulted in his being disqualified. Jones’ camp unsuccessfully appealed the call to Nevada’s athletic commission.

Even though his fight record for 2009 reads 2-1, the circumstances of the loss spoke to Jones as a blossoming fighter. The challenge for his coaches in 2010 will be to harness Jones’ natural athletic gifts into airtight MMA technique. The Hamill fight could just as easily prove a formative moment in his maturity as it could a sign of weakness that could hold him back.

“He learned that he has to be a little more controlled and be careful about executing techniques,” said Jackson, whose first training camp with Jones was for the Hamill fight. “Hamill was definitely a good step up in competition, and in my opinion (Jones) never looked so good. It was pretty much one-sided domination. I thought he improved a lot, and that, if anything, what he learned is that he can be confident in his style and go for it.”
<h2>Fight Finder</h2>
Sponsored by