Sherdog’s Breakthrough Fighter of the Year
By Chris Nelson

It’s hard to imagine any fighter having a better year, both inside and outside of the cage, than Anthony Pettis had in 2010.

As the calendar turned, Pettis was coming off the first loss of his career, still a relative unknown in the 155-pound ranks of World Extreme Cagefighting. Twelve months later, the man they call “Showtime” -- Sherdog’s “Breakthrough Fighter of the Year” for 2010 -- is a burgeoning superstar on his way into the UFC with a guaranteed shot at MMA’s most prestigious lightweight title.

But first things first: “The Kick.” Everyone wants to talk about the kick.

On Dec. 16 in Glendale, Ariz., in the final fight of the final WEC show before the promotion was folded into the UFC, Pettis challenged lightweight champion Benson Henderson. That fact alone was hard for the 23-year-old Milwaukeean to wrap his head around.

“Even just fighting Ben Henderson, for me, was an honor,” Pettis tells Sherdog.com. “I’ve seen him fight so many times, and I know his walk-out. When I was in the cage and I heard his music coming out, I was, like, ‘Man, I’m really about to fight Ben Henderson.’”

And fight Ben Henderson he did. For 24 minutes, the pair battled tooth-and-nail, each man coming close to finishing the other at multiple points during the thrilling, seesaw title bout. But with 60 seconds left on the clock, the outcome still hung very much in the balance.

That’s when it happened.

Stalking his enemy, Pettis fired off a right high kick. Henderson absorbed the shot with his arm and rested wearily against the cage before circling off to his right. Pettis leaned in, shuffled forward and then launched himself off the cage into the air with his right foot, before swinging the same appendage around to smack Henderson square across the face. The champion fell over like a sawed tree and spent the final minute of the fight clinging to consciousness as Pettis bombarded him with punches.

“We did it in tae kwon do demos. Obviously, I’d never did it to a moving object before, but we would jump off of someone’s back and break a board,” says Pettis, who adapted the move for the cage in practice with trainer Duke Roufus. “I don’t even think [Duke] thought I would throw that kick in a title fight, in the last minute. I guess it was just a clutch kick, man.”

Far beyond clutch, the “Showtime” kick cemented Pettis’ place as the final WEC lightweight champion. In the blink of an eye, the off-the-wall maneuver had changed Pettis’ life and, perhaps, even MMA itself.

“Everyone in the world who saw that fight witnessed the evolution of fight sport right there,” says UFC heavyweight Pat Barry, Pettis’ training partner and close friend. “Now that it happened, there are guys out there -- and women who fight, also -- who’ve always had these ideas in mind, and it really happened. And now they’re like, ‘Oh, s--t! It really worked.’”

Footage of Pettis’ spectacular kick landed everywhere from ESPN’s Sportscenter to CNN. The UFC posted a 24-second snippet to its official YouTube channel; in less than two weeks, it was viewed nearly two million times. That doesn’t include the hundreds of thousands of views a myriad of unofficial uploads garnered, a few of which have come from the kicker himself.

“I watch it every day,” Pettis says. “Someone made a YouTube video of it, like in slow-mo, and I wake up and watch it. It just puts a smile on my face every time.” 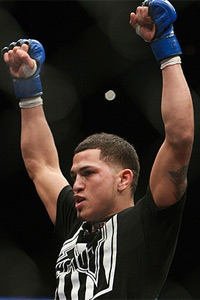 File Photo
Pettis became a star in 2010.
Before he could sit back and enjoy the fruits of his labor, however, Pettis had to put in some serious work.

His year began with a March bout against fellow up-and-comer Danny Castillo at WEC 47. Three months earlier, Pettis had dropped a razor-thin split decision to Bart Palaszewski, and although it was his first defeat after a 9-0 career start, Pettis was realistic about what back-to-back losses can mean for a fighter in a Zuffa LLC-run organization. Determined to stay right where he was, Pettis crushed Castillo with a head kick in the first round, earning himself “Knockout of the Night” honors and a tape-delayed spot on the live Versus broadcast.

Seven weeks later, Pettis was back inside the blue cage, having stepped up on short notice to face Alex Karalexis at WEC 48, in place of an injured Zachary Micklewright. In a prelim that aired live on Spike TV, Pettis assaulted Karalexis with kicks before submitting the UFC veteran with a triangle choke in the second frame.

Pettis’ first main-card slot came in August, when he met Shane Roller in the co-main event of WEC 50. In one of the year’s most exciting WEC scraps, Pettis showed skills on both the feet and the floor, out-striking Roller, as well as scoring multiple takedowns on the three-time NCAA Division I All-American wrestler from Oklahoma State. After winning the opening two periods, Pettis found himself snared in a dramatic, late guillotine attempt; he managed to reverse and slap a triangle choke on Roller, submitting his opponent with less than 10 seconds on the clock.

While Pettis would not fight again until his meeting with Henderson, one of the most significant events of his year was about to take place.

On Sept. 27, MTV broadcast an episode of its documentary series “World of Jenks,” in which documentarian Andrew Jenks lived with and filmed Pettis in the lead-up to his fight against Castillo. The result was a stirring half-hour of television that told Pettis’ story -- his dedication to martial arts and his struggle to make good following the tragic murder of his father in 2003 -- to a theretofore unaware audience.

“I honestly didn’t think my life was that inspiring,” confides Pettis, who saw a groundswell of support from new fans on social media outlets such as Facebook and Twitter when the episode aired. “Honestly, after the ‘World of Jenks’ show ... I thought that was the highlight. I thought that, pretty much, that was the most feedback I’d get. But, I mean, after this kick, this tops that, for sure.”

Now, according to Barry, he can hardly leave the house without being recognized.

“I walk around Milwaukee every day, all day, at night, and no one knows who I am,” Barry says. “But Anthony? Can’t go anywhere. People know him, not all over just Milwaukee, all over America, man. All over the world, people know this guy.”

When Showtime took some well-earned downtime following his title win, Pettis began to fully grasp how widespread his celebrity was becoming.

“I just went on vacation in the Bahamas, and the locals there were recognizing me,” says Pettis. “I was on a cruise and we got off the ship, and the first guy I walked past, he recognizes me. He’s like, ‘You’re the guy that did the kick off the wall!’”

Right now, countless people know Pettis as “the guy that did the kick of the wall,” but the way Barry tells it, the world has only seen the tip of the Showtime iceberg, just a shred of what this ever-evolving young man can do.

“Let’s say the kick never happened. That entire fight, beginning to end, was art,” says Barry. “I’m not saying this because he’s my teammate. This guy gives me the chills. He’s the kind of guy that makes me think, ‘I need to get out of this sport as quick as possible, because they got people growing up doing this s--t now? I need to get out while I still can before something like this happens to me.’ This is an entire different species of fighter.”

Continue Reading » Page Six: Round of the Year