Sherdog’s Round of the Year
By Tomas Rios ([email protected])


Advertisement
Watching the first round of the bout between Thierry Quenneville and Douglas Evans at XMMA 7 “Inferno” on Feb. 27 made one think something huge had to be on the line -- a UFC contract, a night with Jessica Biel, a custom-made “Iron Man” power suit. Something, anything to justify the insanity that defined the first five minutes of a featherweight fight held in front of no more than a couple thousand people at the Bell Centre in Montreal.

The winner’s purse and some post-fight cheers were up for grabs, nothing more. Apparently, it was more than enough for Evans to come out fighting like Mecha-Godzilla on performance-enhancing drugs, as he immediate laid into Quenneville with strikes, slams and ground-and-pound that seemed destined to force a stoppage.

In that moment, referee Yves Lavigne did what so many struggle to do; he stepped back and let the fighters figure it out.

Evans tried his best to compel Lavigne to intervene, as he alternated between pounding Quenneville’s face and trying to cut off his oxygen supply with chokes. Impressive as the Alaskan’s offensive onslaught seemed, Quenneville was putting on a master class in intelligent defense, as he somehow managed to keep his wits about him and his brain cells relatively intact. Yet for every brilliant escape the Canadian grappling guru managed, Evans was there to deliver more punishment.

However, after nearly three full minutes of unquestioned dominance, Evans suddenly found himself in trouble, as Quenneville jumped into a standing kimura and dragged him to the mat. With his left arm on the verge of being turned inside out, Evans rolled forward and sprang free but not before realizing Quenneville would not go off into that good night without leaving every last bit of himself in the cage.

The sequence was a turning point in the fight, as Quenneville, rejuvenated by his near submission, promptly reversed an attempted takedown by Evans and secured top control for the first time in the fight. Unfortunately, there was barely more than a minute left in the round and Evans seemed no more willing to call it a night than Quenneville. Normally, the average fighter takes the opportunity to recover, but Quenneville spent what little time he had left trying to give Evans a taste of his own bitter medicine.

The mere sight of the proud Firas Zahabi protégé pouring his heart into every punch was enough to send an already adrenaline-drunk crowd’s cheers into the far end of the decibel range. When the bell rang to signal the end of an unforgettable first five minutes, the two fighters simply rose to their feet, dusted themselves off and walked over to their corners like they had just finished a brisk morning jog. 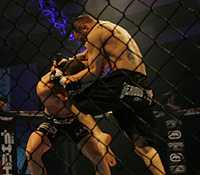 A. Quintero/Sherdog.com
Quenneville vs. Evans was a war.
Evans seemed fine, but as the second round started, it became obvious he would pay the price for his jailhouse blitz strategy. Still, he asked for no quarter, as he valiantly struggled to catch his breath and keep himself from getting knocked out by Quenneville, who was fighting as if he had been strengthened by the stomping he survived minutes earlier. It was then that Quenneville fired what would come to be known as the “Hellbow” -- a flawlessly executed in-line elbow that landed flush on Evans’ chin. While the stout Alaskan once again showed his Clint Eastwood-level manliness by weathering the blow, Quenneville quickly pounced on him with a brabo choke, transitioned to a triangle choke and finished with an armbar.

Not even 90 seconds into the second round, Lavigne moved in and called an end to the match, this after being handed dozens of opportunities to do so earlier. To his credit, he only stepped in after Evans raised the white flag with a tapout. The abrupt manner in which the fight closed made for a perfect chaser to the five minutes of incredible combat that preceded it. The first round between Quenneville and Evans, more than any other in 2009, showed exactly what makes mixed martial arts great.

It goes without saying that their round was not the only one to hit all the right notes.

The first stanza of the World Extreme Cagefighting interim lightweight title bout between Donald Cerrone and Benson Henderson at WEC 43 felt like something that had been spawned by John Woo’s imagination. Cerrone caught Henderson in one attempted submission after another, and Henderson not only found impossible escapes but fought back every step of the way.

No one in the sport has grown as accustomed to winning as Fedor Emelianenko, and the opening round of his main event showdown with Brett Rogers at Strikeforce “Evolution” gave the world a glimpse into what has made the Russian such a mythic figure. Bleeding from the nose within moments of the opening bell, Emelianenko went on to absorb a brief but hair-raising ground-and-pound assault from Rogers. He then showcased his incomparable skills, as he set the table beautifully for a one-punch, second-round knockout.

Another first-round favorite starred heavyweight legends Antonio Rodrigo Nogueira and Randy Couture at UFC 102. Couture’s brutally accurate dirty boxing gave him control of the round early, but Nogueira’s reach and power turned the fight on its head when he dropped the ageless UFC hall of famer on his rear. With that, the pace was set for a classic duel between two of the greatest heavyweights to ever lace up the gloves.
Latest News
ALLUFCBELLATORPFLONE