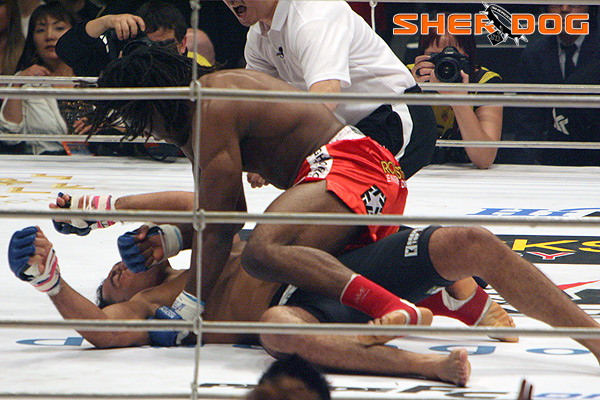 Remember when Sokoudjou was one of mixed martial arts most promising prospects, an athletic Cameroonian with both punching power and potential? Well, before he spent much of his career bouncing from promotion to promotion while hovering around a .500 won-loss record, there was a solid basis for those expectations, which began to form thanks to his walloping of Nogueira.

While a win at Pride 33 would have made Nogueira a likely challenger for the promotion’s 205-pound belt, the unheralded Sokoudjou entered the bout with a 2-1 record, losing to Glover Teixeira via first-round knockout in his most recent fight.

Sokoudjou disguised his intentions well by attacking Nogueira with a pair of low kick-high kick combinations, the second of which was followed by a clubbing left hand that landed squarely on the Brazilian’s chin. Just 23 seconds into the light heavyweight contest, “Minotoro” was knocked out cold; it remains the only time he has been finished in 26 professional fights, and that includes meetings with the likes of Alistair Overeem, Dan Henderson, Mauricio Rua and Rashad Evans, to name a few.

The knockout flair of “The African Assassin” would surface again in his next appearance at Pride 34, as he flattened Ricardo Arona 1:59 into the first round. However, the rest of Sokoudjou’s career has proven to be maddening at best, but his victory over Nogueira as a 16-to-1 underdog remains a crowning achievement.

“I saw the fight with Nogueira as a chance to make a name for myself,” Sokoudjou told The Fight Network. “I actually felt as though I had an advantage entering the fight, because I was an unknown entity to him. Meanwhile, I had plenty of tape to study, and my coach, Dan Henderson, had been in the ring with him. It gave me a lot of confidence that Dan believed I would win the fight. Even though I knew I was an underdog, I never felt like one.”