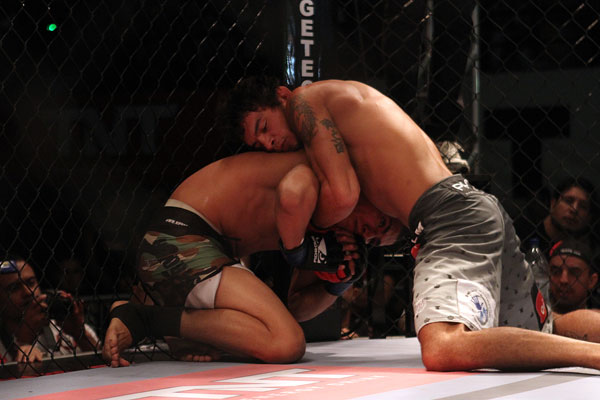 A radiant Milton Vieira could not have asked for a more perfect setting for his Ultimate Fighting Championship debut.

Vieira (13-7) will lock horns with Felipe Arantes in his homeland at UFC 147 on June 23, possibly at the Felipe Drummond Stadium in Belo Horizonte, Brazil. The 33-year-old Pride Fighting Championships veteran will carry a three-fight winning streak into his first Octagon appearance.“Miltinho,” who has fought professionally since 2001, last appeared at Strikeforce Challengers 18 in August, when he submitted Sterling Ford with a first-round brabo choke.

In this exclusive interview with Sherdog.com, Vieira discusses his training for the Arantes bout, his desire to work with muay Thai specialist Sergio Cunha and the growth of MMA in Brazil. He also touched on whether or not he actually invented the anaconda choke and his plans to put together a book on 32 ways to apply the technique.

Sherdog.com: After competing in MMA for so long, how did you greet the news that you would be fighting at a UFC event in Brazil?
Vieira: It was wonderful to hear I was fighting on this card. I have not studied Felipe yet, but it was good to hear that I’ll be fighting in the UFC.

Sherdog.com: How and with whom will you be training?
Vieira: I’ll train my ground game with Pedro Duarte and Murilo [Bustamante] and my boxing with Giovani Tonzano. I’m trying to bring in Sergio Cunha for muay Thai and Andre Benkei to take care of my conditioning. The workouts are strong. I haven’t fought in a while, and I’m trying to compensate with a lot of training.

Sherdog.com: Considering your experience -- you fought in Russia and in Pride -- and your background in luta livre, how do you view the growth of MMA in Brazil?
Vieira: I’m happy. I was involved before anybody was talking about MMA and vale tudo. The only thing that’s better than watching the growth of MMA is growing along with it. It’s good to be a part of it.

Sherdog.com: You are considered the king of the anaconda choke in Brazil. The last time we spoke, you said you had 32 variations of the choke. Are you expanding the menu?
Vieira: Well, the menu is extensive. I now have several ways where I always end up in that position. I have a greater understanding of the position, and when I get a chance, it fits. If there’s an arm or a neck there, I will catch it, too. I really know a lot about the position, and I teach it. I have a lot of variations, some 32 of them. However, with this debate over whether it’s an anaconda choke, a guillotine choke, an arm-triangle choke or a D’Arce choke, it means I’ll have few real anaconda chokes. Today, we can catch an arm-triangle that does not use the opponent’s arm, but it’s the same process.

Sherdog.com: Regarding the position, Antonio Rodrigo “Minotauro” Nogueira started to use it after you came to Brazilian Top Team from luta livre. That’s why many people in Brazil think you invented it. However, I once talked to luta livre master Daniel D’Dane on the television program “Cara a Cara,” and he was really revolted by the idea, saying the position already existed in luta livre long before you started training. What do you have to say about that?
Vieira: I’ve been in the market for 20 years. People will think I’m old for having mentioned that (laughs). I went to train in wrestling in Gama Filho, and, there, I learned the role of three points. I took it to the gym. We were improving the fit, and it happened. Since the beginning, there have been no-gi championships. I’ve fought since the days of luta livre. In jiu-jitsu, nobody knew the position, and it’s hard to do because of the gi. I don’t say I created it, but I never saw it until I began to develop it from that luta livre position. I’ve done a lot for the position and for the sport, but I don’t want to discuss it. If everyone says they invented it, I’m happy.

Sherdog.com: At least four new techniques appear at every world jiu-jitsu championships. The submission art in Brazil is like a living organism isn’t it?
Vieira: Well, there are people who have a knack for creating things, sitting on the mat and inventing positions. I’m a guy who goes home and wonders about the arm and neck and how to submit people in different ways. I arrive at practice, jump in like crazy and try to make it fit. Sometimes, I dream about a new position, wake up, take notes so I don’t forget and try to use it in sparring.

Sherdog.com: Were you the first lute livre fighter to train at Brazilian Top Team, which was like a home for jiu-jitsu?
Vieira: No, Marcio “Cromado” [Ramos Barbosa] and Alexandre “Pequeno” [Franca Nogueira] arrived before I did.

Sherdog.com: How do you see your path to a title shot against UFC featherweight champion Jose Aldo?
Vieira: That’s a lot further ahead. It’s hard to see a guy reaching a title fight before three or four fights. Until then, we have to watch and see if Aldo is the same. He has many tough guys ahead of him, but he will always have my support.