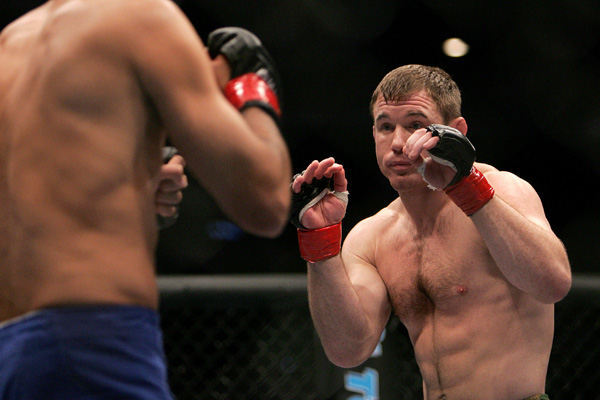 Matt Hughes was once the world’s premiere welterweight. | Photo: Sherdog.com


On Aug. 7, 2010, Chael Sonnen proved that constant pressure coupled with dominant wrestling could bother the seemingly unbeatable Silva. For four-plus rounds, the Oregonian dominated the middleweight champion with ground-and-pound, only to have victory snatched from his clutches in the bout’s final frame courtesy of a triangle armbar from “The Spider.” While others had abbreviated moments of success against Silva in his 11 prior Octagon appearances, no one had so thoroughly controlled the Brazilian for as long as Sonnen did.

Even after Silva handily dispatched Sonnen in their rematch this past July, wrestling is generally recognized as the pound-for-pound king’s one Achilles’ heel. Is it possible that Silva’s deficiencies could have been exposed years before he exploded onto the UFC scene with a 49-second knockout of Chris Leben in 2006? It all depends on what you thought of Hughes in his prime.

The Team Miletich product and “The Spider” were scheduled to lock horns at UFC 36 in Las Vegas. Hughes had captured the welterweight strap with a second-round slam KO of Carlos Newton at UFC 34 and was just beginning to establish himself as one of the most dominant 170-pound champions in the promotion’s history. Silva, who was then Shooto’s welterweight ruler, was a more slender version of the fearsome striker he is today.

Silva instead signed with Pride Fighting Championships, where he suffered the last two legitimate setbacks of his career. His UFC debut would not come until four years later. Meanwhile, Hughes won 11 of his 12 Octagon bouts during a similar timeframe. Silva has grown in both size and stature since then, while Hughes has not competed since UFC 135. While Silva would be the clear-cut favorite in the post-“Ultimate Fighter” era, a meeting between the two stars might have been far more interesting a decade ago.