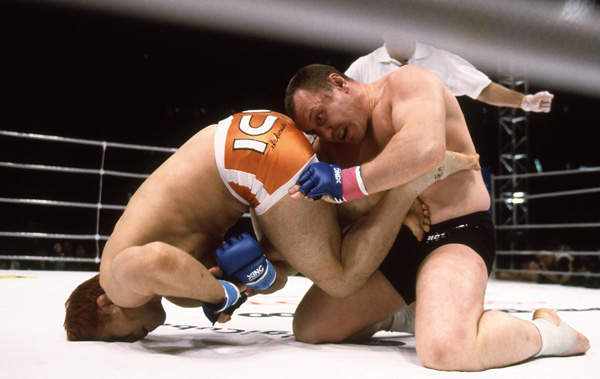 
Mark Coleman, 45, spent several more years in the Pride ring, including high-profile bouts with Fedor Emelianenko (twice) and Antonio Rodrigo Nogueira; a return bid in the UFC ended with a loss to Randy Couture in February. He intends to fight again.

Following the Grand Prix, Mark Kerr, 41, displayed little resemblance to the “Smashing Machine” of old, compiling a 3-10 record since 2000. He considers himself “99.9 percent” retired and is pursuing a degree with an eye on pharmaceutical sales.

Royce Gracie, 43, continued an annual fight schedule in Japan for several years, often requesting (and receiving) special rules. In 2007, he defeated Kazushi Sakuraba in a rematch; the result was upheld despite Gracie testing positive for anabolic steroids, a charge he denies. He intends to have one more bout before retiring.

Kazushi Sakuraba, 40, remained one of Pride’s biggest attractions, but a willingness to compete against larger opponents had mixed results. In 2006, Sakuraba signed with K-1: his most recent bout was a decision loss to Ralek Gracie, Royce’s nephew and Rorion’s son. He owns and operates the Laughter7 gym in Tokyo.

Akira Shoji, 36, alternated wins and losses in a career lauded for his perseverance. His last bout was a loss to Gilbert Yvel in 2007; now a judge for Dream, he is considering a retirement match.

Kazuyuki Fujita, 39, went on to memorable matches with Ken Shamrock and Mirko “Cro Cop” Filipovic (in Filipovic’s MMA debut). He lost to Alistair Overeem during a K-1 2009 New Year’s Event.

Gary Goodridge, 44, kept his role as Pride’s premier brawler before moving to K-1 in 2004. He announced his retirement in May 2010.

Igor Vovchanchyn, 36, remained with Pride through his retirement in 2005. He now operates a catering business in the Ukraine.

Enson Inoue, 43, fought six more times following the Kerr bout before stepping away to run a gym and manage fighters. He ended a six-year hiatus with a submission victory over Antz Nansen in April.

Guy Mezger, 42, had memorable bouts with Chuck Liddell and Wanderlei Silva; a 2004 UFC return against Tito Ortiz was halted when Mezger suffered a stroke, prompting his retirement. He is now president of Mark Cuban’s HDNet Fights banner.

Following his bout with Gracie, Nobuhiko Takada, 48, went winless in his last four Pride appearances; a 2001 bout with Mirko Filipovic was so plodding it was left off the U.S. DVD release of the event. In 2002, Takada became a public face for Pride and stayed with the company until its demise in 2007. He remains involved in Japan’s professional wrestling industry.

Pride Before the Fall

Mark Coleman, Pride’s first open weight
Grand Prix champion, has fond memories
of the Tokyo Hilton hotel: great food,
beautiful architecture and an atmosphere
that seemed to soothe the tensions in
the days leading up to fights. » Continue
Jake Adelstein spent over a decade covering crime in Japan for the Yomiuri Shinbun newspaper. His expose on a Yakuza member who entered the United States to receive a liver transplant was the subject of both a “60 Minutes” piece and repeated death threats from his subject. A journal of his experiences, “Tokyo Vice,” was published by Random House in 2009.

After six years with the family, Sam Rand left the Gracie Academy in 2001 to pursue dot-com interests. He is now an executive with the Mullen advertising agency.

Rorion Gracie, 58, continues to own and operate the Gracie Academy in Torrance, Calif., where he keeps an extensive archive of his family’s mementos. His brother, Royce, left the gym in 2001 to pursue independent interests.

Brian Johnston, 41, continued on in Japanese pro wrestling until suffering a stroke in 2001.

Pat Miletich, 42, retained his UFC welterweight title until a loss to Carlos Newton in 2001. He continues to train fighters in Bettendorf, Iowa; a rumored match with Frank Shamrock for the Strikeforce promotion has yet to materialize. He can be seen as analyst for ESPN2’s “MMA Live.”

Hampered by injuries, Bas Rutten, 45, returned to fighting only once, a TKO win over Rueben Villareal in 2006. He is now pursuing an acting career and can be seen as a co-host on HDNet’s “Inside MMA.” He has not spoken with Kerr since 2006.

John Hyams followed “The Smashing Machine” with directorial work in television and for the well-received direct-to-DVD “Universal Soldier: Regeneration,” starring Jean-Claude Van Damme. Another “Universal Soldier” film is in the works.

Stephen Quadros stayed on with Pride through 2003. He is currently an on-air personality for Showtime’s Strikeforce series of MMA broadcasts.

Matt Hume remained with Pride as an official through 2007. He owns and operates AMC, a Kirkland, Wash., mixed martial arts gym.

Pride continued to entertain Japanese and American audiences, twice running in Las Vegas in an attempt to broaden its international appeal. In 2007, the Japanese newspaper Shukan Gendai accused the promotion of having ties to organized crime: the ensuing scandal led to the loss of their television partner and a public backlash. Zuffa, the UFC’s parent company, purchased Pride and its assets in 2007, intending to operate the promotion as a separate brand. To date, they have not run any shows under the Pride banner; Pride action figures, rings and other paraphernalia have been marketed to U.S. consumers; a best-of program airs on Spike weekly.