With a little more than five minutes of professional mixed martial arts experience under his belt, Matt Mitrione finds his name near the top of the marquee for one of the most anticipated pay-per-view events of 2010. Fighting MMA’s resident boogeyman has its perks.

Mitrione will lock horns with Kevin “Kimbo Slice” Ferguson in a featured heavyweight matchup at UFC 113 “Machida vs. Shogun 2” on Saturday at the Bell Centre in Montreal. When UFC matchmakers extended the offer to meet the bearded Bahamian-born brawler, the lure proved too great, and Mitrione did not hesitate.

“I think everybody in the world knows if they fight Kimbo and beat him like a red-headed stepchild, they’re going to become a household name overnight,” he says. “I couldn’t say yes fast enough.”

Mitrione spent six weeks in the same house with the reformed street-fighter on Season 10 of “The Ultimate Fighter” reality series. Though their paths never crossed inside the cage, he has seen others buckle when confronted by Slice’s rugged reputation, chiseled physique and menacing scowl.

“He’s got an aura about him,” Mitrione says. “He’s got that big burly beard, gold teeth, that haircut and he’s probably sitting on seven or eight percent body fat. I can see why people are intimidated. There’s a mystique about him.”

The 6-foot-1, 235-pound Slice took a three-round unanimous decision from Houston Alexander in his promotional debut at “The Ultimate Fighter 10” Finale five months ago in Las Vegas. Alexander, a man who had bulldozed Keith Jardine and Alessio Sakara, spent much of the match tentative and disengaged, throwing the occasional strike from the outside as Slice bobbed and weaved. Mitrione was watching.

“Who knows what would have happened if Houston had not lost that fight a month before he fought it,” he says. “I’m not intimidated by anybody. I’ve been through more physically, mentally and emotionally -- as far as sports goes and probably life -- than a lot of people. I am battle tested.”

The younger of two boys born to a psychiatrist and hospital administrator in Springfield, Ill., Mitrione has a rich and textured past. A multi-sport standout at Sacred Heart-Griffin High School -- he was on the swim and diving team -- he ultimately hedged his bets on football.

A two-time All-Big 10 Conference selection at Purdue University, he spent a handful of seasons in the NFL, where, as a 300-pound defensive tackle, he went toe-to-toe with the Goliaths in the trenches. Mud-caked facemasks were part of the deal, along with grueling two-a-days in the glaring mid-summer heat and the kind of crash-test-dummy abuse that either hardens or breaks a man. Such stresses translate well to MMA.

“I understand what my body can go through, what my mind can push itself to do,” Mitrione says. “I’ve seen that. I’ve been through the worst training camps you can imagine. This is something football has prepared me for all my life.”

During his senior season at Purdue, Mitrione suffered a stress fracture to his foot while back-pedaling on an Astroturf field. He decided to play through the break in an attempt to impress NFL scouts, and though he went undrafted, he won a roster spot with the New York Giants. However, his injury only worsened, and, in 2003, he underwent the first of seven surgeries to repair the damage, including a procedure to lengthen his Achilles’ tendon. He did not walk unaided again for more than a year.

“It took so long to get better,” Mitrione says. “It was the beginning of the end of my career, but it really started my life.”

Subsequent attempts to rekindle his professional football career failed. He saw the writing on the wall, looked in the mirror and accepted his fate.

“It’s not difficult when they just tell you you’re not good enough anymore,” Mitrione says. “It’s not a hard choice when you don’t have a paycheck coming in.”

An Ultimatum at Home 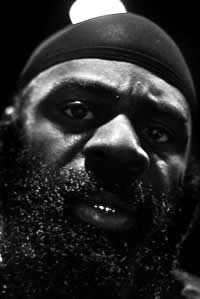 Stephen Albanese/Tailstar.com
Mitrione's reach may trouble Kimbo.
Mitrione was introduced to traditional martial arts in grade school, as his parents sought refuge from his rambunctiousness. He needed discipline, structure and avenues through which to funnel a seemingly limitless pit of energy. When his playing career ended in the NFL, he returned to those roots with little knowledge of where they would lead him.

Testosterone in hand, Mitrione took up full-time training at the Integrated Fighting Academy in Indianapolis, alongside UFC veterans Jake O’Brien and Chris Lytle. He soon accepted an amateur fight at a show promoted by longtime friend and Philadelphia Phillies right fielder Jayson Werth. However, an injury and the resulting surgery nixed the bout just three weeks after he entered the gym to train.

“I’ve always been a fan of MMA,” says Mitrione, who competed in two kickboxing tournaments in high school. “It was something I appreciated. I enjoyed the chess match. But it got to the point where I was always training or helping someone train, and my wife said, ‘If you’re going to spend so much time doing this, you better start making some money.”

The 31-year-old father of two got the message. Word of his raw but natural ability spread, and the UFC was in the market for athletic big men through which to populate the 10th Season of “The Ultimate Fighter.” Mitrione interviewed for a spot and fit the mold. In May 2009, he boarded a plane for Las Vegas and set out to make his name in full-contact fighting.

During the show, which premiered in September, he ousted favored UFC veteran Scott Junk by majority decision in a taxing stand-up encounter. He later submitted to the Greg Jackson-trained James McSweeney in the quarter-finals, but Mitrione’s two performances earned him a slot on “The Ultimate Fighter 10” Finale lineup in December. There, he knocked out fellow NFL veteran Marcus Jones in the second round at the Palms Casino Resort in Las Vegas.

“I think I raised a couple eyebrows,” Mitrione says. “I feel like people started thinking, ‘Maybe this kid has something.’”

He has since dropped anchor in Milwaukee, where he trains under former world kickboxing champion Duke Roufus. Mitrione spent six and a half weeks with the stand-up savant, as he prepared for his UFC 113 appearance.

“
I’m going to sneak a
frying pan into the
ring and hit him in
the face with it.

“My manager recommended Coach Duke,” he says. “[Roufus] called me, explained to me why he thought we’d be a good match and I bought what he was selling. I’ve learned so much about the intricacies of stand-up fighting, especially stand-up fighting for big men.”

Mitrione found Slice likeable and respectable during their time on the show. The magnetic 36-year-old Miami-based striker succumbed to former International Fight League heavyweight champion Roy Nelson in the preliminary round. Few expected the former YouTube sensation, blessed with a cult following and built-in audience, to take UFC President Dana White’s bait and try his hand at reality TV.

“When I look at him, I see the American dream,” Mitrione says. “He made himself, and he’s helping other people. He had a somewhat sordid past, and now he’s chasing a good paycheck and having a good life. He’s a good dude who loves his family.”

More than a year removed from his embarrassing 14-second technical knockout loss to Seth Petruzelli on CBS, Slice has set up shop at American Top Team in an attempt to refine his craft. He showed marked improvement on the ground and in the clinch against Alexander. Mitrione knows what to expect once they engage.

Mitrione, who fights southpaw, believes length -- his 81-inch reach rivals that of anyone on the UFC roster -- could become his greatest asset.

“I’ve got giraffe limbs,” he says. “I can punch him from anywhere. Plus, I fight southy, so I can give him some different angles. And I have some pretty heavy digits at the end of these arms.”

Should the tide turn against him, Mitrione has worked a few wrinkles into his game plan against Slice. He has no desire to suffer the same fate as Bo Cantrell, David “Tank” Abbott or James Thompson.

“I’m going to sneak a frying pan into the ring and hit him in the face with it,” he says, tongue planted firmly in cheek. “If I can get in there and get out without the ref seeing it, maybe I can win the award for most creative knockout.”