LeBell has the kind of stories you’d expect from an 80-something martial artist, many of which involve him doing something that no lawyer today would ever allow. Most notably, he had what’s believed to be the first cross-discipline prizefight in history, a 1963 bout with boxer Milo Savage. (Spoiler: LeBell won.)

In an earlier, pre-PETA incident, LeBell actually scrapped with a 700-pound Canadian black bear named Victor. It wasn’t a real no-holds-barred fight -- the loser wasn’t dinner -- but it goes to show you that there’s not much new under the sun; fifty years on and the man vs. beast promotional hook is alive, well and coming to a pay-per-view provider near you on Saturday.

Brock Lesnar, all 280 pounds of escaped zoo animal that he is, is ostensibly the bear, a quick, vicious and almost supernaturally strong carnivore whose athleticism makes him nearly impossible to control. Standing in opposition is Randy Couture, the comparatively weaker homo sapien who will have to try and negate that aggression with a more substantial martial arts IQ.

It may not be the most sensible matchup for the UFC’s tangled heavyweight title picture -- Lesnar is a piddling 1-1 in the organization -- but it’s exactly the kind of guilty-pleasure spectacle that gives fans, for lack of a more masculine term, butterflies. Lesnar is nothing if not imposing, and Couture is nothing if not capable. Bet large on the fight and there’s a 50/50 chance you’ll be enjoying Top Ramen for a few months. 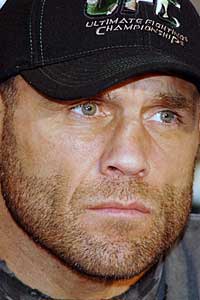 Photo by Sherdog.com
Is it too early in Lesnar's
career to face Couture?
That’s because handicapping the bout is largely pointless without having any knowledge of which Couture will show up. While he looked sharp against another Doctor Moreau creation in Gabriel Gonzaga last August, taking 14 months off in your mid-40s is for CEOs, not prizefighters; as much as the media likes to romanticize Couture’s remarkable career stamina, his body will eventually decide to follow its genetic fate and begin decomposing.

If that sounds like preamble for a declaration that Couture is once again the underdog, you’re half-right. My problem -- actually, Couture’s problem -- with Lesnar is his ridiculous speed for a man of his dimensions. While Gonzaga and Tim Sylvia placed similar strain on the scales, their offense looks like underwater aerobics compared to the big man’s pressure. Frank Mir, who submitted Lesnar with a leg lock, compared the fight to “getting hit by a car.” (A chilling proclamation coming from a man who actually was struck by a moving vehicle.)

But it goes both ways: While Couture hasn’t had to deal with this kind of young man’s agility and wrestling ability since a competitive bout with Kevin Randleman in 2000, Lesnar has yet to face anyone who can challenge him in the way Couture can. “The Natural’s” Greco-Roman tie-up is a perfectly adopted art of clinch work, dirty boxing and slams. In terms of ring generalship, he’s Patton, and no one in Lesnar’s camp will be able to diversify the way he can.

And while Lesnar is undoubtedly a behemoth, Couture is hardly a flyweight; see him in person and you’ll think a brick wall grew legs.

Unless Lesnar simply blasts right through him, it’s incredibly likely a momentary lapse in combat judgment -- a side effect of inexperience -- will allow Couture to capitalize. I sense a rear-naked choke in Lesnar’s immediate future, the kind of submission that bypasses his Redwood trunk of a torso in favor of his airway -- the perfect method for inducing a panic attack in any rookie fighter. If not, expect Couture to use Lesnar’s head for target practice in the clinch until a broken nose prompts a doctor intervention.

Does Couture gain anything with the effort? It really depends on how competitive Lesnar makes the fight. If he folds early to inexperience and ignorance, the headlines will downplay the challenge. If he pushes Couture into the championship rounds, they’ll both come out looking solid.

Any way you slice it, though, dealing with someone of Lesnar’s proportions and wrestling resume at age 45 is well worth bragging about.

If Couture does fold under the pressure, it shouldn’t necessarily signal the end of his tenure in the sport. Losing to a missing piece of Easter Island is hardly shameful, and there are plenty of compelling bouts for the fighter left on the marquee.

Lesnar has options either way: He heads into a unification match with the interim champion or finds himself fighting the loser of December’s Nogueira/Mir contest.

Alternately, he could smash a steel chair over Dana White’s head and get into a feud with Junie Allen Browning.

The only guaranteed winner is the UFC, which can profit from Couture continuing a storybook career or finding a new figurehead in the highly charismatic Lesnar. Visually, he’s an immediate hook; attitudinally, he borders on being the perfect MMA heel, with a scowl and a crop-top that makes him look like the world’s surliest G.I. Joe.

Right now, though, he’s simply part of the proper alchemy for a Couture fight: List his opponent’s advantages on paper (many), his chances of winning (iffy) and then watch Couture stuff humility down our throats via a superior game plan, conditioning and ambition.

Bears are no picnic to deal with, but a hunter with the right experience and enough firepower shouldn’t have many worries.

Couture has all the ammunition he needs; here’s hoping he’s still fast enough to pull the trigger.