RIO DE JANEIRO -- The final weeks of 2010 will be very busy for Brazilian MMA with major events in Rio de Janeiro, Sao Paulo, Belo Horizonte, Belem and Salvador. This past weekend was a hectic one in Rio, a great warm-up for the wild weeks to come.

Friday, the MMA community met at the Delfim Academy in the borough of Barra da Tijuca where the legendary Claudio Coelho, one of Brazilian MMA’s great boxing trainers, launched a book all about his life.

Saturday, while UFC 122 played out in Germany, two of MMA’s foremost physical trainers -- Rafael Alejarra, famous for his past work with Wanderlei Silva and Demian Maia, and Rogerio Camoes, the strength and conditioning coach for UFC and Strikeforce middleweight champions Anderson Silva and Ronaldo "Jacare" Souza -- conducted a seven-hour seminar for nearly 80 professionals, who came from all over the country.

When night fell, Rio’s fight community moved to the Nogueira Training Center in the neighborhood of Recreio dos Bandeirantes, where almost 500 people packed the gym for the third edition of their in-house fight event “Face to Face,” with the likes of Anderson Silva, Rafael "Feijao" Cavalcante Junior dos Santos, Antonio Rogerio Nogueira and Mike Swick in attendance.

BTT Steals the Show at "Face to Face 3"

Many thought Brazilian Top Team was done when the Nogueira brothers left. However, at “Face to Face 3” inside the Nogueira Training Center on Saturday night, BTT took two impressive wins over the squad of “Minotauro” as Murilo Bustamante’s students Pedro Nobre and “Toninho Furia” Antonio Glaristone stole the show. 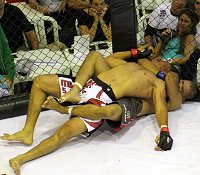 M. Alonso
"Toninho Furia" couldn't
make "Chatubinha" quit.
The 125-pound Nobre had trouble early in his fight with the tough Bruno Menezes. However, Nobre took over in the second round, imposing his striking game. In the third, Nobre earned the highlight reel KO, with a head kick that knocked Menezes unconscious on the canvas.

In the best fight of the night, Glaristone and Igor "Chatubinha" Fernandes literally raised the crowd, who gave each fighter a standing ovation in the middle of the bout.

The first to earn the applause was “Chatubinha,” who managed to escape a very tight rear-naked choke. In the second round, Glaristone was forced to fend off a tight triangle from Fernandes, which again, drew the raucous crowd to their feet.

In the stand-up, the fight was toe-to-toe, with both fighters looking for the knockout. After 15 minutes, it was “Toninho Furia” who took the unanimous decision.

“Man, what heart!” said the UFC’s Mike Swick after the fight. “Definitely it was very impressive the way those two guys escaped from such tight holds.”

But, Minotauro Team got a reason to celebrate in the main event. Eder Jones stepped in for an injured Andre “Chatuba” Santos on short notice, and with sharp striking and good takedowns, earned a second-round knockout over Alberto “Baiano” Nascimento.

X-Gym might be Brazil’s most star-studded gym, housing Strikeforce champions Ronaldo "Jacare" Souza and Rafael "Feijao" Cavalcante, and often playing host to the likes of Anderson Silva, the Nogueira brothers and Fabio Maldonado. Saturday, it was X-Gym’s strength and conditioning coach Rogerio Camoes and Rafael Alejarra, who played the starring roles.

Nearly 80 people attended on Saturday the pair’s first workshop about physical preparation, which covered everything from altitude training to doping in MMA.

"We were very happy with the success of the workshop. Professionals from six Brazilian states and two from Venezuela came,” said Camoes. “We divided the workshop into five hours of theoretical and two hours of practice." 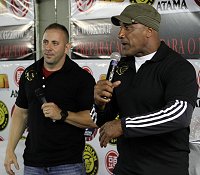 M. Alonso
Alejarra and Camoes speak.
For those who still think that training at altitude to increase the rate of hemoglobin is a benefit for high-performance athletes, Rafael Alejarra was quick to try to dispel those myths.

“I had the opportunity to follow three UFC athletes in Big Bear, measuring lactic acid, glucose, hemoglobin, followed by four weeks at sea level and I guarantee you that virtually no change,” said Alejarra. “The psychological gain is much higher than physiological. Actually there are already some papers that show that the gains are no higher than 4 percent.”

In the practical class, Camoes and Alejarra prepared a 10-station circuit for the attendees to complete.

"At the sound of the whistle, they switched. In the end, we had a lot of puking in a garbage can,” Alejarra commented.

In the final stage of the seminar, Camoes discussed doping in MMA. Rather than the average attack on steroids, Camoes was specifically critical of diuretics.

"I would say the most serious problem in the case of high-performance athletes, even more than steroids, which can be measured and cycled, is the amount of diuretics they take to dehydrate and to make weight,” he elaborated. “That’s really more dangerous.”

A celebration of some of the biggest names in MMA and jiu-jitsu -- that was the climate during the book release part of Claudio Coelho’s “This is Me: The Favela to the World.” 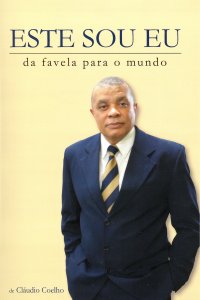 
Kyra Gracie, Murilo Bustamante, Pedro Rizzo, Luis Roberto "Bebeo" Duarte and others, as well as all of Brazil’s fight media, were at the Delfim Academy on Friday to honor the legendary teacher.

Coelho’s 210-page biography tells the life story of the founder of Nobre Arte, the gym considered since the 1990’s to be Brazil’s major landmark for boxing-for-MMA. Coelho wrote in detail about his life from age nine up to his several laps around the world, honing the hands of some of MMA’s greatest fighters.

The book is divided into two parts: Chronicles, where Coelho recalls in 30 chapters the most important events that marked his life, from the slums to traveling the world, and funny stories of fighting, where the trainer recalls the best stories he witnesses behind the scenes of the MMA world over nearly two decade.

To close the book, Coelho devoted several pages to thank the characters who most helped his career, plus a gallery of photos that illustrate the walls of his famed academy on the famous hill of the Cantagalo favela.