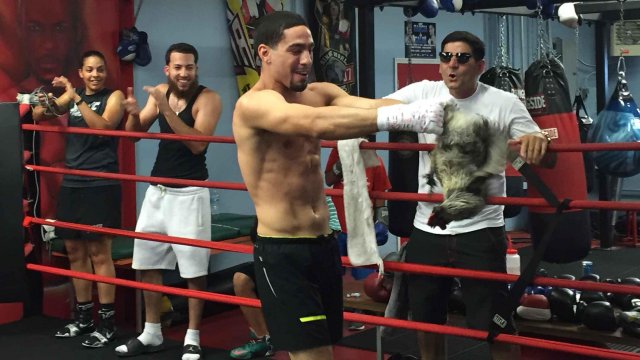 
For Premier Boxing Champions’ second effort on ESPN, the fast-rising Danny Garcia moves up to 147 pounds and plants his flag in a division home to a plethora of big-money fights. Veteran two-division champion Paulie Malignaggi steps up to meet him in what promises to be a crackling matchup.

Garcia went on a tear at 140 pounds to open his career, taking out Amir Khan, Lucas Matthysse, Zab Judah and the legendary Erik Morales twice. Mauricio Herrera gave him a tough and controversial fight in March 2014, but Garcia rebounded by destroying the overmatched Rod Salka last August. In his most recent outing, Garcia took another razor-thin and exceptionally controversial fight from Lamont Peterson. Despite his recent habit of taking close decisions, Garcia remains a hot property with the potential to become a legitimate star.

Malignaggi has been out of action for more than a year after suffering a brutal knockout loss at the hands of Shawn Porter. Prior to that, he beat a past-his-prime Zab Judah for a 12-round decision victory and lost a close fight to Adrien Broner in a high-profile bout. There is a real chance that Malignaggi’s time as an elite boxer is coming to an end, and this fight will tell us a great deal about his future.

The Brooklyn native is a talented and crafty boxer. He is a pure example of the out-fighter type who relies heavily on his consistent jab, crisp footwork, and ring awareness to stay out of trouble. Fast hands, quick feet and great timing are the keys to Malignaggi’s approach, and over the course of his career they have made up for his complete lack of power. As he ages, however, those assets seem to be diminishing, and his historically outstanding durability has been tested more and more.

When Malignaggi can get his jab going, the rest of his game opens up. He throws it early and often, doubling it to the head and body and setting a precise range at which he can circle and pivot safely. At his preferred distance, Malignaggi can step in with well-timed right hands to the head and body and pick off his opponent with a counter or two at a time. As the fight goes on, he picks up the pace to the point where he routinely throws more than 20 punches in a minute. Few opponents can deal with his rhythm and offensive output.

The great weakness of Malignaggi’s game is pressure. He needs space and time to work, and while he has a nice arsenal of backstepping jabs and left hooks, he lacks the power to dissuade a determined and aggressive opponent. If forced to the ropes or compelled to exchange in the pocket, Malignaggi is willing to throw but does not have the slick defense or the pop necessary to be a threat. Age and wear make this a more salient problem, as he cannot take the shots he once did and his diminishing speed gives him less margin for error.

Garcia is a skilled and aggressive fighter. He is not a born pressure fighter -- his ring-cutting footwork is not outstanding and he does not rely on forcing his opponent to the ropes -- but he is at his most comfortable with his opponent squarely in front of him. The Philadelphia native is not a pure, brick-fisted puncher, but he does have real power in his hands, particularly his cannon of a left hook.

The pocket is Garcia’s specialty, and he does his best work in exchanges. “Swift” has deceptively fast hands that are made even faster by his hair trigger on counters. The moment his opponent stops in front of him and throws, Garcia unleashes a clean combination of two to five punches that he works around, under and through his opponent’s guard. The left hook is the exclamation point for those combinations, and he likes to lever punch with it, going first to the body and then the head. Even in the pocket, Garcia is defensively sound and difficult to hit cleanly, pulling his head offline as he throws, using his guard to deflect some shots and rolling with others to minimize the damage.

Because Garcia’s footwork is not of the highest caliber, skilled out-fighters who can stick and move have consistently given him trouble. That hair-trigger in the pocket requires a rhythm, and opponents who refuse to stand in front of him can disrupt Garcia’s. He makes up for that deficiency by capitalizing on every possible opportunity. If there is an opening, no matter how small, he throws volume and commits to the attack, and opponents who make the mistake of committing to exchanges in order to keep Garcia off them wind up getting chewed up in the pocket.

The Pick: If Malignaggi were in his prime, this would be a difficult stylistic matchup for Garcia. Even now, the Brooklyn native can still give the younger fighter serious problems. Skilled boxers like Peterson and Herrera have been able to frustrate Garcia for rounds at a time by sticking and moving, and Malignaggi has the skills to do precisely that.

The problem with that scenario is the wear and tear that Malignaggi has suffered during his time in the sport. His lack of power and need to contest every round leaves him with little margin for error, and the aging process exacerbates those shortcomings. While there is a possibility that Garcia catches Malignaggi in an exchange, it seems more likely that the durable Brooklynite makes it to the final bell. The pick is Garcia by wide decision.