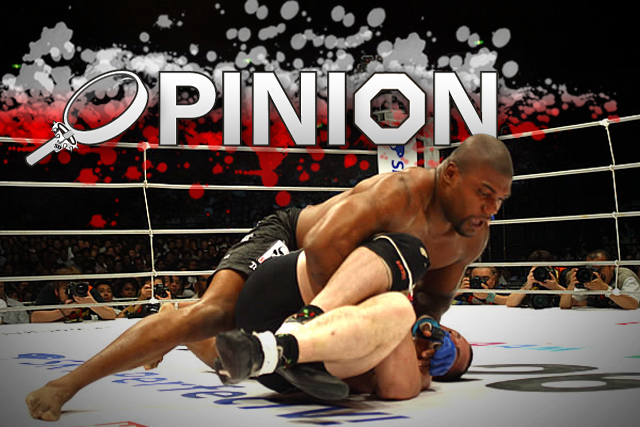 Recently, I noticed an interesting trend in the Ultimate Fighting Championship. Grapplers seemed to be having more success. They were getting more takedowns against the cage and staying on top for longer, with bottom fighters being less likely to immediately get back up, even compared to a year ago. Was this just a feverish, mistaken observation on my part, or had some aspect of grappling evolved, making matters more difficult for the defender? The answer was neither. On a recent UFC broadcast, color commentator Daniel Cormier noted that there used to be a groove on the outside edge of the Octagon, right inside the cage, and fighters would plant their toes and feet there to get additional leverage. However, the promotion had updated its cage design and removed it.

On the face of it, this was a tiny change. Being able to fit a toe or foot into that groove increased friction slightly, which in turn made it harder to move a fighter when going for a takedown from the clinch. That added friction also made posting up against the cage or wall-walking slightly more effective, as it had been harder to attack the base for the same reasons, and any horizontal motion had a surface to push off from. Yet that tiny change had a massive effect on the nature of fighting in the UFC. Grappling became more effective, especially in the clinch, and fighters no longer rely on being able to get up as easily using the cage. Considering how many UFC fights go to a close decision where the winner barely got a clinch takedown at a key moment, or stayed in top position for a little longer, the change has altered the outcome of dozens of fights, which in turn has impacted numerous careers. Any astute mixed martial artist now has to look at combat within the Octagon differently, all because that damn little groove is no longer there!

And yet, such minute elements define modern-day MMA, especially since the dominance of the UFC caused most organizations to adopt a more or less circular cage along with the Unified Rules. To see this, consider the differences between the UFC and its now-defunct rival, Pride Fighting Championships.

We can start with the gloves. Pride's were more restrictive, encasing more of the fingers, and allowing less movement with them. Again, on the face of it, a small difference, but which had seismic effects upon combat. For one, it made clinch grappling far less effective, as it was more difficult to lock one's hands together or clinch onto a leg or hip. For another, the UFC's more open gloves allowed hand-fighting, which is as relevant for strikers as it is for grapplers. And lastly, in what is almost unanimously considered a drawback, the UFC glove allows spreading one's fingers outwards, leading to the prevalence of eye pokes in the Octagon. Just imagine how much this has affected fights and careers. Conor McGregor would be far less dangerous without his mastery of hand-fighting to set up his lightning left cross, and without eye pokes, Jon Jones wouldn't be nearly as hard to beat! (I'm kidding...maybe.)

On the ground, the main difference was that Pride allowed knees to a downed opponent but not elbows, while the UFC allows elbows but not knees. This encouraged fighters in Pride to improve position and go for submissions. To this day, Pride featured some of the trickiest and most beautiful guard passes I've ever seen outside of a BJJ competition. It had the opposite effect in the UFC; firing elbows from full or half-guard was a devastating strategy, as Tito Ortiz demonstrated so well. On a general scale, this meant that Pride benefited BJJ practitioners while UFC favored wrestlers. It also completely transformed the relative value of side control. In the UFC it's arguably the worst top position. It's harder to land punches and elbows there than in half or full guard, and also easier for the bottom opponent to get up from. The only times a modern UFC fighter uses side control is either as a brief transition while going for mount, a kimura attempt, or in conjunction with a crucifix, which I consider a different position entirely. By sharp contrast, side control was an awesome position in Pride, even rivaling full mount. That's because it was perfect for delivering vicious knees to the head and body. Many stoppages in Pride occurred in side control for that very reason, while it was and is exceptionally rare in the UFC. Lastly, defending from the bottom against ground-and-pound is completely different. Despite the aforementioned lack of finger freedom with Pride gloves, a common strategy for stopping ground-and-pound was to reach out and control the wrists of the attacking fighter. This would be a horrible idea in the UFC, as the top fighter would simply smash the hell out of his foe with elbows. Thus, ground-fighting in the UFC and Pride looked almost like two different sports, all because one promotion chose to legalize the knee and the other the elbow.

Lastly, we come to the differences between a rectangular ring and an octagonal cage. This is particularly interesting since the relative advantages of each have changed as MMA skill has evolved. In the early 2000s, people thought the cage was a big advantage for grapplers, as a common strategy, perfected by the likes of Randy Couture, was to take an opponent down and trap their head against the fence while inflicting savage ground-and-pound. This completely flipped on its head as fighters began learning to use the cage effectively to stay upright and also became experts at posting up and wall-walking, essentially using the cage to nullify wrestling. Nowadays, it's the ring which benefits grapplers. For a fine example of this, consider the two fights between Kyoji Horiguchi and Darrion Caldwell. In their first encounter, inside a ring for Rizin Fighting Federation, Caldwell repeatedly got takedowns, and was winning prior to Horiguchi pulling off a guillotine choke. In their rematch in Bellator MMA's cage, Caldwell was nowhere near as successful. Horiguchi masterfully used the fence to frustrate Caldwell's attempts. Caldwell never once managed to get Horiguchi's back firmly on the canvas. At most, he achieved a stalemate with his opponent's butt on the canvas, but with his own head lower than Horiguchi's, unable to pull Horiguchi’s hips away from the fence to complete the takedown.

The shape of the fighting enclosure is also critical. The term “cutting off the ring” exists for a reason, as one can corner an opponent and force an exchange inside a rectangular or square enclosure. While commentators use the term “cutting off the cage,” it doesn't really apply to the Octagon. Since it's almost a circle, fighters can spend the entire fight endlessly circling without ever running into the perimeter. That's not a completely negative quality. I love Stephen Thompson's fighting style, which would be far less effective if he were forced into more toe-to-toe exchanges. Conversely, this can cause lackluster point striking affairs, and make matters difficult for tricky grapplers without elite wrestling. Kron Gracie, for instance, found this out the hard way against Cub Swanson. Used to the rectangular ring of Rizin, Gracie had no answer to Swanson's simple strategy of constantly circling away, giving him no chance to use his much-vaunted BJJ.

The next time you watch a fight, consider how much it would be affected by a single, seemingly innocent rule change.