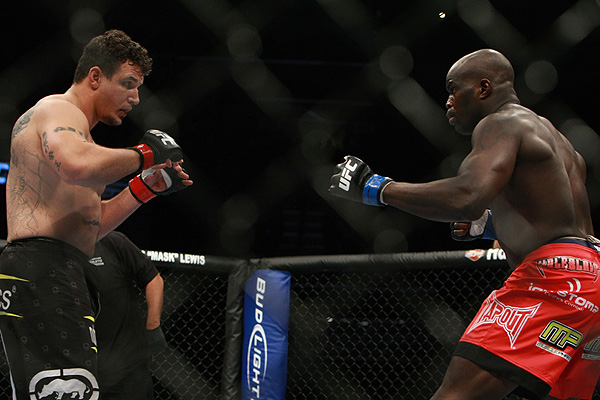 
A black belt under the legendary Sergio Penha, Ricardo Pires was one of the first Brazilian jiu-jitsu instructors for the man who holds the record for the most submission victories in the history of the Ultimate Fighting Championship heavyweight division: Frank Mir.

The Brazilian-born Pires has lived in the United States for decades and recently opened a new academy in Fort Lauderdale, Fla., where he will teach alongside his son, Victor. Pires first met Mir when the future UFC champion was just a teenager. He was a blue belt then, and Pires watched him develop into one of MMA’s most successful heavyweights despite an admitted disdain for training early in his career.

“The great thing about Frank is that, to me, he hasn’t reached 50 percent of his full potential,” Pires told Sherdog.com. “I’m not saying that because he was my student; that is a fact. Frank was always very lazy. He never really enjoyed training. Most of the moves he displayed during a fight he learned during warm-ups, believe it or not.”

Pires can point to two specific instances, the first being Mir’s armbar on Roberto Traven in 2001.

“The one he used on Traven, Sergio Penha showed him after the weigh-ins,” Pires said. “I mean, he hasn’t got such a thing as a specialty or a preference. I give credit for that to the Osvaldo Alves school. Frank barely knows the scores. Osvaldo Alves’ school always goes for the submission.” 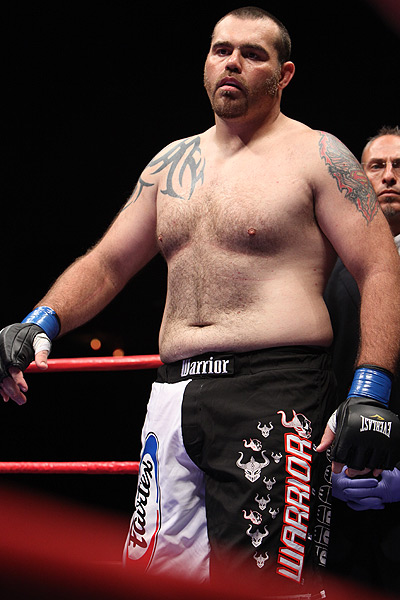 (+ Enlarge) | Photo: D. Mandel/Sherdog.com
Sylvia was victimized.
“That move he used against Pete, he learned it the day before,” Pires said. “I was training on Friday with a white belt, and I just couldn’t finish him. I was desperate, a black belt not being able to submit a white belt. I had to submit him, and luckily, I managed. Then I called Frank so he could see it, and he used it on Pete the next day.”

Pires quietly wonders what Mir’s career might have looked like had he shown more dedication to his craft early on in his development.

“Frank moves very well, both on top and at the bottom,” he said. “As a heavyweight, he is the greatest submission artist in the UFC. In general, you get in there as a black belt but as you keep getting punched, you end up as a white belt; but Frank never misses his opportunities. If he trained 15 years ago as he trains nowadays, I have no doubt he would be number one pound-for-pound.”

Pires can recall his first meeting with was then a wet-behind-the-ears Mir.

“Frank has always been an excellent kid,” he said. “I got to Las Vegas nearly by accident. I went to a karate gym where they had jiu-jitsu classes but not enough structure. When I met Frank, he was 17, 18 years old. I started teaching him, we became close friends and he even went to live at my place. We became really good friends, and I have put a lot of my time on his training. When I got there, he had just received his blue belt, and he went all the way to the black belt with me. He competed in tournaments with and without the gi, until he reached purple belt, and won them all, including the Pan Americans. As a purple belt, he was offered his third vale tudo fight, as he was supposed to replace Williams against Traven with two weeks’ notice. At that time, I was called crazy but I went for it, and it was his UFC debut.

“I have never trained a light-skinned fighter, a dark-skinned fighter, an American fighter or a Brazilian,” Pires added. “I have always trained a student and I would have put him in to fight anyone. Today, partners fight each other. I would do it again. Traven was very successful, both in jiu-jitsu and MMA. He was world champion both in his weight class and in the absolute division. What happened there is common in jiu-jitsu. You sometimes roll with a blue belt in practice and end up getting submitted. I think that’s what happened. Traven wasn’t counting on the possibility of being finished by a purple belt. I was upset because Traven is a nice guy, but his corner made little of Frank. They say Frank is lucky. I say he’s ready not to waste opportunities.” 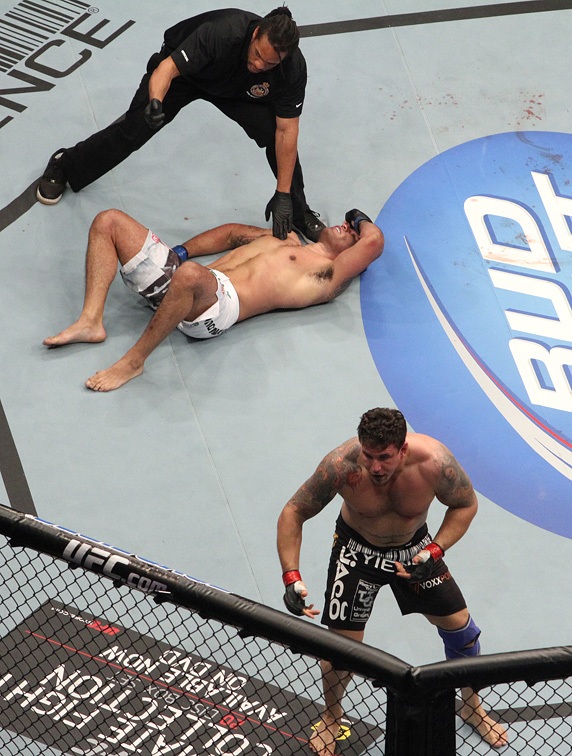 “I was in the corner, and I was not sure if the arm had broken,” Pires said. “We were worried whether the fight was resuming or not. I started to take Frank’s gloves off before the official call, because I didn’t want him to continue. I was always worried about going beyond the first round, because he has never had stamina. What made that moment special wasn’t the fight itself but all we’ve been through together. I owe Frank a lot, and we have a nice story, both professional and personal. At his first vale tudo fight, he was paid with a $500 bad check. At the next, I drove 12 hours with him in the back to get to the event. These things are priceless.”

Mir’s ascent was interrupted by a motorcycle accident soon after he dethroned Sylvia. Sidelined for nearly two years, he returned to an uncertain future and proceeded to sandwich losses to Marcio Cruz and Brandon Vera around an uninspiring victory over Dan Christison.

Many doubted whether Mir still had the drive or the goods necessary to compete at the highest level. He put those doubts to rest with three straight finishes against Antonio Hardonk, Brock Lesnar and Antonio Rodrigo Nogueira. Mir went on to defeat Nogueira a second time in their rematch at UFC 140, breaking his upper arm with a first-round kimura. Aside from his brief title reign, the victories over Nogueira, one by technical knockout, the other by technical submission, remain the defining achievements on Mir’s mixed martial arts resume.

“There are two sides of this coin,” Pires said. “First, I was upset for ‘Big Nog,’ who’s a guy everybody likes, very respectful, and who has always treated me nicely. As a matter of fact, Mir first met ‘Big Nog’ as a fan. He really looks at him as an idol, but I can’t deny my satisfaction. Of course, I was glad with Mir’s submission because he showed his work over a guy who has a huge history in MMA.”

Though whispers of a potential trilogy match with Nogueira persist, Pires cannot see the benefit of such a fight from Mir’s perspective.

“I think in terms of self-promotion it would be a mistake for Mir to take another fight against ‘Big Nog,’” he said. “If he beats him for the third time, what will he get? If he loses, there will always be a doubt about him being lucky before. I tell you this: If he accepts this trilogy, it will be more about the respect he has for ‘Big Nog’ than to prove something to someone.” 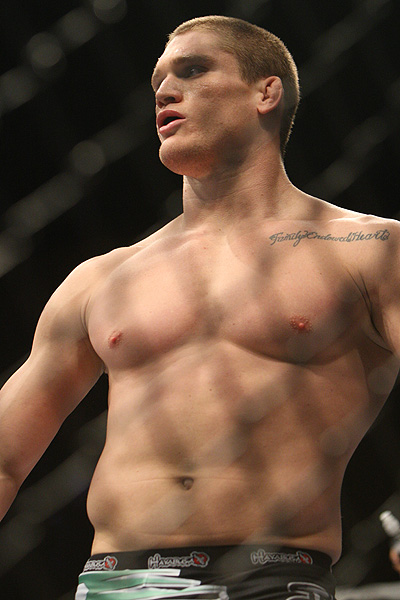 (+ Enlarge) | Photo: D. Mandel/Sherdog.com
Duffee is next in line.
Now approaching his 36th birthday, Mir put an end to a troubling four-fight losing streak in February, when he knocked out former EliteXC champion Antonio Silva in Brazil. He will ride that momentum into a July 15 clash with Todd Duffee at a UFC Fight Night event in San Diego. While many were surprised Mir sprang the upset on Silva, Pires was not one of them.

“Frank is one of the few people whose fights I can actually pick right,” he said. “I know him a lot. When he stepped into the ring the way he did, I thought, ‘He’s all right.’ I felt he had a better posture and was better physically in the first seconds of the fight. I have no idea what he’s been doing, but he’s doing it right. Actually, I think he got back to what he used to do at age 17. He was a good, pleasant person, wasn’t cocky at all.

“Today, he interacts on social media,” Pires added. “To me, he’s back. He has changed, the way he talked to Brazilians after the fight, the pictures he took in Russia ... We always talk to each other, but he lives in Vegas and I’ve got four kids and a business, so it’s hard. I don’t even see my sister that much, but we’ve never fought and never
stopped talking to each other.”