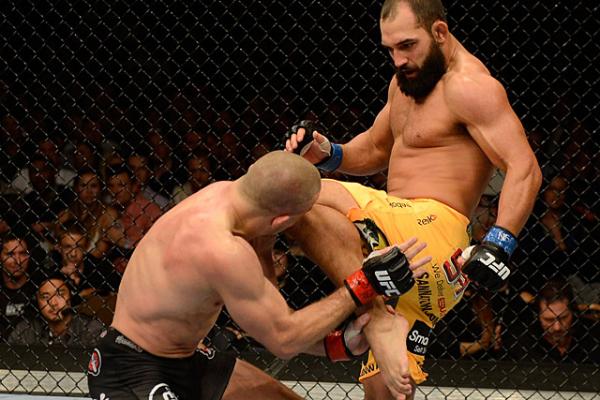 How did you score the UFC 167 main event? Please tell us below. | Donald Miralle/Zuffa LLC/Getty Images


Mixed martial arts journalism is a serious business. Following the MMA community on Twitter, is not. The following is a light-hearted (and sometimes insightful) look at how the combat sports world viewed UFC 167 via social networking.


They got it wrong.


GSP sounds nervous, like he know he stole something.


Hmmmm interesting... YOU MMA JUDGES CAN SUCK A HUGE COCK!


St. Pierre: "I couldn't see with one of my eyes." Well, then what do you say about two of the cageside judges?


What?! Johny Hendricks on top of Georges St. Pierre, LETS HIM UP. Looks around like, "Are you all watching this?"


Waiting for Chael's "I did not tap out" soundbites.


Lawler has looked damn good since hooking up with ATT. Winner of Condit-Brown would be an orgasmically violent pairing. May we be blessed.


Robbie Lawler entered the UFC having lost 3 of 4. Now he's a top-5 WW. This sport is crazy.


Josh Koscheck, part of the rich UFC tradition of stars getting put through the woodchipper in their final fights


Koschek just poked 7 Fans during his walk to the Octagon. #UFC167


look at kim winslow shepherdin them hobbits yall. come on kim take them over the misty mountains to the land of questionable stand ups boo.


Joe Rogan just said GSP was on top of the food pyramid. So he's fats, oils and sweets? #UFC167


"ok UFC what kind of lyrics would you like for your theme song?" "we're really looking for something that tells the viewer they are a pussy"


OPINION: Keith Kizer will likely propose to Winslow for her performance tonight.


God, that was flagrant rule-breaking. Ed Herman promoted to Nature Boy Status for that fence-grab. Kim Winslow banished from the land.


Any time I see Ebersole, all I see is this. #UFC167 pic.twitter.com/Ae7F4rcnyT


Time to see if Erik Perez can join the Tiequan Zhang All-Stars.


When asked if he wanted to "Touch Gloves" Campuzano said "Yes" and then put on a condom. #UFC167