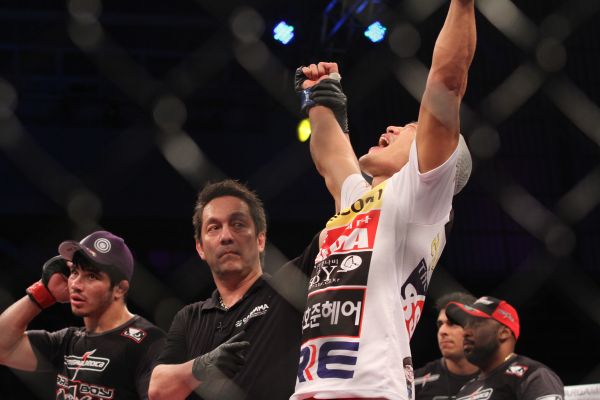 
Mixed martial arts journalism is a serious business. Following the MMA community on Twitter, is not. The following is a light-hearted (and sometimes insightful) look at how the combat sports world viewed UFC Fight Night 29 via social networking.

Brazilian fighters won 4 out of 6 on the main card. Something tells me Brazilian fans are anything but satisfied with .667 batting average.


#UFCFightNight Silva vs Kim as told by Joe Silva pic.twitter.com/RRQv2xvcxu


I think a chunck of Carlos Condit 's knee got lodged in Kim's brain and manifested itself in this fight.


Right hand injury? How will Silva eat his post-fight buffet?


Matt Hamill gets 25% of Thiago Silva's purse, if anyone at the arena is selling oxygen tanks they can prob get the other 75%


That was crap! When someone is clearly tapping and the ref can't even pull him off Dana need for fine Palhares to... http://t.co/UriKsO0mXq


Mike Pierce will now wonder if it's torn up... I'm talking about his contract, not his knee.


Toquinho just beat Mike Pierce more convincingly than anyone else in history. Load up the leglockin' hype train until the next gas shortage.


I hope Pierce's health insurance covers limb replacement, b/c Palhares doesn't play around when it hits the mat. #limbsnatcher #UFCFN29


Mike Pierce can 'quietly win' 42 fights in a row and he will sadly be no closer to a title welterweight title shot than I am.


That oil check by Dillashaw was so deep, the University of Phoenix is awarding him a degree in proctology.


If TJ would have fought in Sacramento he wins that decision. I'm just guessing.


Saying someone looks like Renan Barao in a way other than "resembles him when he fights" is definitely throwing some serious shade on a man.


Damn. I was hoping Garett Whiteley would get the win over Alan Patrick so "Tread Whiteley" could become a thing.


Odds are if you're an American and your first appearance in the Octagon is in Brazil, you're really not ready for the Octagon.