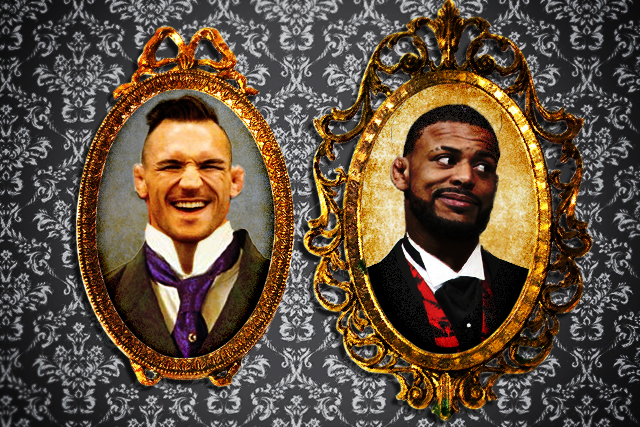 
Is there a more frustrating fighter in the Ultimate Fighting Championship than Michael Johnson? I suppose the answer to that question depends on what you find frustrating. If you’re anything like me, the amount of unfulfilled potential on display in the average Johnson fight puts him on the short list at the very least.

To understand what a strange case “The Menace” is, one need only begin to list the seemingly conflicting facts of his career. At 17-13, he sports a journeyman’s record but a (former) contender’s résumé. After going 1-5 in his last six fights, Johnson’s tilt with Andre Fili this Saturday is quite possibly a must-win for his continued UFC employment. Yet he owns convincing wins over three of the top six lightweights in the world, and those wins have become more impressive with the passage of time, not less.

He remains the only man to defeat Tony Ferguson in the UFC, and while that fight was not the 30-27 blanking that the judges claimed, it was a clear and uncontroversial win for Johnson. He is also the only man to beat Dustin Poirier since his return to the lightweight division. Poirier is a likely next challenger for the winner of the Khabib Nurmagomedov-Conor McGregor blockbuster at UFC 229, and Johnson blew him out of the water in 95 seconds. It is arguably the worst Poirier has ever been made to look, including his knockout loss to McGregor.

Johnson was not the first fighter to defeat Edson Barboza, but he may have been the first to lay down the blueprint for blunting the Brazilian’s terrifying offensive firepower. Where previous Barboza conquerors had exploited his ground game -- Jamie Varner by mauling him with ground-and-pound, Donald Cerrone with an instantaneous back-take after rocking him, both in the first round -- Johnson spent a full 15 minutes outstriking Barboza on the feet, showing that the key to staying off of Barboza’s highlight reel was to deny him the space and time needed to uncoil his long kicks and punches. It was a performance that defies the popular narrative that Johnson is a terrible tactician or game planner, or at least shows that if that is the case now, it was not always so.

So what happened? It is not a case of physical skills eroding. Johnson is only 32 and shows no signs of losing a step; in his last two fights, he was visibly faster than Darren Elkins and Justin Gaethje, and in both cases he was winning the fight right up until he wasn’t. Even against Nurmagomedov, Johnson repeatedly beat his man to the spot for much of the first round, landing solid leg kicks and backing him up with punches, until the Dagestani juggernaut finally managed to secure a takedown and the inevitable ensued.

I’m always reluctant to say a fighter “quit” or “broke.” To make that accusation is to step on thin ice by presuming to know what’s going on in another person’s head. By the middle of the second round, Johnson did not look as if he wanted to be in the cage with Nurmagomedov anymore, but that’s due as much to Nurmagomedov as anything; he might be the most physically and psychologically overwhelming fighter in the sport. Put simply, he breaks people.

A decline in fight IQ may be part of the problem. It is interesting to examine the similarities and differences between Gaethje’s three UFC fights. While Johnson, Poirier and Eddie Alvarez all allowed themselves to be drawn into Gaethje’s preferred style of wild melee in the first round, only Johnson stayed in his opponent’s wheelhouse long enough to get himself knocked out.

Whatever the reasons are, he is running out of chances to figure it out. It is stunning that a man who has reached the competitive heights Johnson has is flirting with a .500 record and watching men he once soundly defeated leave him in the dust on the way to title fights.

Michael No.2: King of the Small Pond


I was disappointed this week to learn that Michael Chandler had signed another multi-fight deal with Bellator, same as I was in 2016, last time he re-upped with the organization that has been his home for the last 19 of his 22 career fights.

Right out of the gate, let me say: Chandler needs nothing at all from me, least of all my stamp of approval on his career decisions. He is a former longtime top-10 lightweight, and at 32, he may be again before all is said and done. He is Bellator MMA’s greatest home-grown star by a wide margin, he enjoys solid compensation and enviable job security, and he can probably still walk into any Dave & Buster’s location in North America and train for free. He is on the short list of greatest fighters never to compete in the UFC.

But that’s the rub, isn’t it? Fair or not, for better or worse, there is an asterisk attached to the legacy of fighters who never plied their trade in the world’s premier mixed martial arts promotion, at least those whose competitive prime came after about 2005. Actually, it might be more accurately described as a question mark than an asterisk. When the lion’s share of talent began concentrating in the UFC in the post-Pride Fighting Championships, post-Strikeforce era, we got to learn a lot. Personally, my expectations were proven wrong more than once; I predicted that Denis Kang and Jorge Santiago would become perennial UFC contenders, but that Alistair Overeem wouldn’t last. However, at least we got the chance to find out. For those fighters who never fought in the UFC, we simply don’t know how good they really were in a lot of cases.

I half-joked in a previous column that I’ve resigned myself to die never knowing whether Mamed Khalidov was the second best middleweight of his era or the 15th. I could say something similar about Ben Askren or Chandler.

But why would Chandler even want to come to the UFC? Look at this quote by Bellator’s Scott Coker, from the article I linked above. As you do, compare it to the kind of things you see Coker’s UFC counterpart say about his fighters on almost a daily basis. And in Bellator, unlike the UFC, Chandler doesn’t need to worry that glowing praise will turn to screeching invective the moment he disagrees with Coker on something.

"I'm happy that we were able to come to terms with Michael Chandler on a new fight contract. He's had a ton of great fights with us already, is a great representative for the brand and there's something to be said about him being with the Bellator family as long as he has. One day, Michael will be a part of Bellator's 'Mount Rushmore.' He is truly in the prime of his career, so now I look forward to sitting down with the team and putting together a plan for when fans can expect to see Michael in big fights soon.”

However, Chandler was also lobbying publicly for a trilogy fight with former foil Eddie Alvarez last week. Why? Because Alvarez is a free agent and that is one of the few feasible matchups that might spark public interest and make competitive sense. Those are the things not guaranteed to Chandler as Bellator’s franchise player. That’s the trade-off, for him as well as for us.