HOLLYWOOD, Fla. -- It was a rocky start for Eddie Alvarez, but the heavy favorite eventually breezed past Greg Loughran with a first-round guillotine choke in 2:44 at Bellator Fighting Championships 1 inside the Seminole Hard Rock Hotel and Casino.

Unaware of his underdog status, Loughran had no problem standing in front of Alvarez and used his reach advantage to clip the Philadelphia Fight Factory star and drop him to his knees. Alvarez composed himself quickly and dropped levels, shooting in for a double-leg to get Loughran down. Alvarez found the guillotine from there, sealing his slot in the next round of the lightweight tournament.

The tourney’s other blue-chip prospect, Jorge Masvidal, also advanced with relative ease. Although a strong wrestler, seasoned opponent Nick Agallar chose to circle and trade with the sharp American Top Team striker for the opening minute. Masvidal floored Agallar early and wasted no time pouncing on him. Agallar made no attempt to get back to his feet or recover guard, leaving referee Troy Waugh no choice but stop the bout at 1:19. 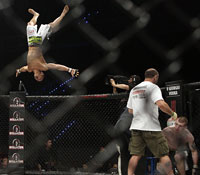 Dave Mandel/Sherdog.com
Alvarez celebrated his
win in grand style.
Toby Imada, who has fought on the circuit since 1998, finished Alonzo Martinez with a rear-naked choke at 3:26 in the first round. Martinez was able to handle himself from the outside, but once Imada got a hold of him, there seemed to be little the Nebraskan could do. Martinez gave up his back while trying to get to his knees.

Joe Soto was able to keep his unblemished record intact in the night's opening featherweight tournament bout, as he pounded out Canadian Ben Greer in 3:40. Soto seemed undeterred by Greer's takedown defense and used his strikes to close the distance and bring the fight to the mat. From a successful single-leg, Soto took mount and then Greer’s back. In half guard, Soto pummeled his opponent for the finish.

Featherweights Estevan Payan and Luis Palomino fought a competitive battle in the evening's sole bout to go to the judges. In what was mostly a stand-up fight, neither fighter seemed to have a definitive edge over the other. On the ground, Payan was able to wield complete control and used it to sway two of the three judges into passing him through to the next round. 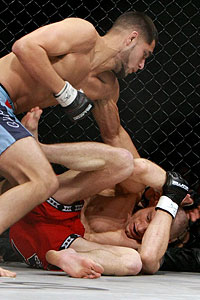 Dave Mandel/Sherdog.com
Jorge Masvidal (top) laid
a beating on Nick Agallar.
Mexico native Yahir Reyes took full advantage of his first bout north, securing a rear-naked choke on Nick Gonzalez at 2:11 of the first round. Gonzalez came out strong, but Reyes was able to weather any punishment sent his way. Stunning Gonzalez into going for a takedown, Reyes grabbed for the choke as it hit the mat.

Bellator returns on April 10 at the Mohegan Sun Arena in Uncasville, Conn.

In the evening’s other non-tournament bouts: