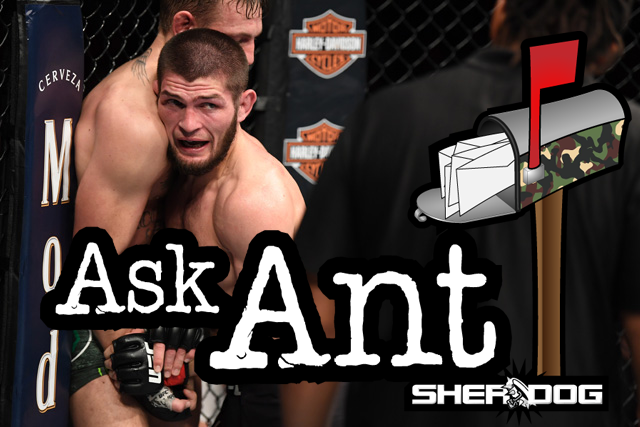 wartor – Which would be more competitive: Conor vs Khabib 2 or Khabib vs Mayweather?
Before I can properly answer that question, let’s go ahead and clearly define what the word “competitive” means in this context. The cross-sports intersection of Floyd Mayweather Jr. and Conor McGregor was far from legitimate competition. Mayweather is without a doubt the greatest boxer of this generation and there’s a solid case to be made that he is among the all-time best. In no way, shape or form will an MMA fighter stand a chance at beating him outside of the improbability of landing the perfect punch. “Competitive” in its textbook definition does not apply here.

McGregor did have some success in the early rounds but once again I use a word very loosely. His “success” for the most part involved wild flurries and a few awkward clinch punches. When Mayweather decided “The Notorious” was tiring and the audience was entertained enough, he decided to push the pace and end the fight. While I do think “Money” had to adjust his strategy on the fly -- something that he has done essentially his whole career -- McGregor was at the mercy of the lifelong boxer. So let’s substitute “competitive” with “entertaining.”

With that being said, if the results of UFC 229 have anyone questioning the outcome of Khabib Nurmagomedov stepping into the boxing ring with Mayweather; please know that it will only be worse. MMA math is very unreliable in MMA. It’s even more unreliable when you change the sport. Just because McGregor landed a few decent shots and went ten rounds against Mayweather and then went on to get dominated by Nurmagomedov, doesn’t mean that the Dagestani will do any better.

Nurmagomedov was able to nullify McGregor’s striking arsenal and even land a solid overhand right, not because he’s a better standup fighter but because his grappling skills are scary and game changing. Without the threat of the takedown, the former champion would most likely have easily outlanded and outclassed the current belt holder.

Look at the masterpiece McGregor put on at UFC 205 against Eddie Alvarez. The footwork, the head movement, the distancing, everything was on point and done to perfection. McGregor’s obvious strengths in the standup department proved very useful against Mayweather and along with being carried to an extent, gave him ten rounds to do what he could.

Despite being the undisputed champion of the lightweight division (no disrespect to Tony Ferguson), Nurmagomedov has virtually none of these qualities as a striker. Without the sophistication in his head movement, Mayweather would land at will. Without the footwork, he would find himself wherever Mayweather wanted him to be. It would simply be a bad night for him.

Let’s not put in any stock into Nurmagomedov’s words while he was being flanked by a cheese grinning Leonard Ellerbe. Just because “The Eagle” dropped McGregor and Mayweather didn’t means absolutely nothing. Ellerbe was smiling, but not because the anticipation of an epic fight between the elite of boxing. He was smiling because of the anticipation of that gazillion-dollar check that would be deposited in his bank account.

But let’s not even put in any stock into anything about that video that made the rounds on social media. I highly doubt that Nurmagomedov is seriously trying to challenge Mayweather. Of course that payday would be lovely, but this is the same guy who pretty much told the Nevada State Athletic Commission and the UFC to keep his $2 million guaranteed purse for 229. Of course, Mayweather would happily jump out of retirement again to further pad his record against a popular MMA fighter. In fact, let’s just stop talking about this foolishness altogether before it ends up happening again.

Long story short, a rematch between Nurmagomedov and McGregor would be actually be a mixed martials bout between two championship level mixed martial artists. Even if McGregor once again found himself being pummeled from half guard, mounted, and submitted it would be infinitely more competitive -- the actual definition -- than another circus involving Mayweather and whoever happens to hold a UFC belt.

FinalConflict2005 - Black Beast with a quick turnaround. Good or bad? DC disrespected that Popeyes chicken.
This is the fight that we didn’t know we wanted until it was announced. While I’m a huge believer in the entertainment value of Daniel Cormier defending his heavyweight title against Derrick Lewis, I’m not a fan of the quick turnaround. The mad scramble to find a suitable main event for the rapidly approaching Madison Square Garden card has led us to a great fight under very dubious circumstances.

I stood there five feet away from Lewis after his come-from-behind win against Alexander Volkov, as he dismissed the notion that he was ready for a title shot because of his struggles with cardio in a three-rounder. This is while Cormier was vocal about the hand injury he sustained at UFC 226 keeping him away from the third meeting between him and Jon Jones which was heavily rumored as a potential headliner for UFC 230.

While the battle for the honor of Popeye’s Chicken is great as a style matchup and clash of camera-friendly personalities, I’d prefer it to be when both men are at their best physically. No matter what happens on Nov. 3, we all will know that the peak versions of “DC” and “The Black Beast” will not be present. Even if the fight is a barnburning scrap, expect a flood of what-ifs immediately afterwards. What if Lewis just didn’t have his brain rattled for the better part of three rounds just a few weeks ago? What if Cormier had two healthy hands? What if both men had full training camps and were in optimal shape to face each other?

It’s obvious that Cormier is taking this fight because he feels it’s a winnable one that won’t jeopardize his potential huge payday against Brock Lesnar that is penciled in for early 2019. His best case scenario is to earn a nice check before the end of the year and meet up with Lesnar for a blockbuster event to finish out his career with the option of continuing past his 40th birthday to complete the trilogy with Jones. Specific and well-laid plans like this are what make the cruel and fickle MMA Gods laugh as they reach into their bag of tricks.

So much can go wrong. What if Lewis lands that soul-crushing right hand after enduring 24 minutes of punishment? What if Cormier doesn’t get out of the fight unscathed and can’t make it back in time for the Lesnar fight? There are so many ways this can go wrong for Cormier. On the other hand, while he may not be 100-percent when he steps in the Octagon, Lewis has nothing to lose and everything to gain. There are very clear flaws with how this bout came to be. If the extra test that the New York State Athletic Commission is mandating for Cormier and Lewis come back with a green light, we should at the very least be treated to a fun night. Considering the NYSAC’s demonstrated willingness to interfere in matchmaking -- stopping Rashad Evans from competing and denying Paul Felder a title shot, for example -- that is no guarantee.

WallyBear - I just wanna know how you work as a MMA journalist and how your martial arts experience helps with it. Also what do you think about the state of MMA journalism, I often read a lot of criticisms in the forums.
As someone who is relatively new to the field of MMA journalism, I may not be the most qualified to answer but perhaps my fresh eyes can give a balanced and unjaded look into the topic. My experience as a martial artist has definitely been a big help in my understanding and appreciation of MMA. While I’m not waiting to get a call for the Tuesday Night Contender Series, I’ve seen and trained many of the things that we watch every Saturday night. It has trained my eye to look for certain subtleties that many would simply not notice. Also, having been a cornerman, coach, and sparring partner, I’ve seen the elation of a win, the difficulties in training, cutting weight and the aftermath of brutal defeats, from a side that TV cameras typically don’t show. Those experiences have given me a certain respect for the fighters and what they go through that the untrained may not have.

My method to approaching the work is fairly simple: call it as I see it. Ask questions that can move the discourse forward and attempt to be as objective as possible while not betraying my personal beliefs. It’s like walking a tightrope at times but it’s necessary to get the job done properly.

As far as the state of MMA journalism goes, it’s just like anything else. There’s plenty of good and plenty of bad out there. Behind the scenes I’ve had overall good experiences with fellow media members, admired their work, and have forged some good friendships as well. I’ve also read some insanely bad opinion pieces and seen my fair share of the dreaded “clickbait” headlines. I’ve watched in awe at expert interviewers able to draw out the raw and honest truth from fighters who otherwise would keep their thoughts inward. I’ve also cringed at horrible questions asked at press conferences and scrums from somebody who either doesn’t cover the sport regularly or just is desperate for camera and mic time. The point is that it’s a mixed bag.

At the end of the day, the good journalists and media members of this sport are fans of it. Of course our fandom at best translates to a general love of MMA, the cast of characters, and/or the general chaos it has to offer. At worst, the good ones suppress it to deliver content that is appropriate for professionals. The ones who are good will consistently deliver with engaging thoughts in their written work, podcasts, etc. The others should be ignored and hopefully they’ll go away.