At the age of 40, Pat Miletich made a statement Thursday against Thomas Denny.

More than two years ago, Miletich was unsure if he’d ever fight again following a disappointing submission loss to Renzo Gracie. Now the MMA world is wondering if the Iowan is on the cusp of a comeback.

“They say the last thing to go when you’re old is your power,” said Miletich, a former UFC 170-pound champion.

Power has not been lost if Thursday’s decisive knockout at Adrenaline II is of any measure, as the hometown fighter looked every bit the striker he was known for a decade ago.

A clean left-hook counter to the chin stunned Denny in an early exchange, and set the tone for a spectacular finish in front of a partisan crowd at the I Wireless Center in Moline, Ill.

Miletich rode out most of the first period from his opponent’s guard following the counter blow, and he took the frame 10-9 on the Sherdog.com scorecard. Much like the first stanza, Denny (26-18) opened up with his hands to start round two. Miletich (29-7-2) took advantage with his superior boxing and planted his foe with two right-hand counterpunches that forced referee Michael Reid to save the fallen fighter at the 0:50 mark.

The world will have to wait if Miletich will return to the cage, as the “Croatian Sensation” seemed unwilling to commit to a future fight, save for a mega-bout with one of combat sport’s biggest names.

“I’d like to fight somebody like Antonio Tarver or Winky Wright or somebody like that from the boxing world,” declared Miletich. “That would be interesting. Bring it, boys.”

In his first action since being stopped by Andrei Arlovski in July, Ben Rothwell cruised to an easy win over journeyman Chris Guillen. 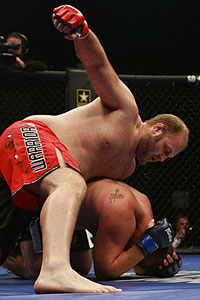 Dave Mandel/Sherdog.com
Rothwell got back in the
win column against Guillen.
A takedown attempt from Guillen (13-12) was thwarted by Rothwell in the bout’s opening minutes, with the “North Star” taking the top position. Guillen rolled from his stomach and exposed his face, which gave Rothwell (30-6) an opening to drop elbows to the head from side-control. A tap from the punishment occurred at 3:40 of the first.

“I hope you appreciate some elbows to the head,” said an unscathed Rothwell, who upped his record to 30-6 with the win.

Michael Russow moved to 11-1 (1 NC) with a workmanlike submission of Braden Bice in a mere 73 seconds.

Following a slam in which Bice (5-7) was lifted high into the air and deposited on his back, Russow easily passed to side-control, where he transitioned into a north-south choke to claim his seventh consecutive victory.

Russow has not tasted defeat since dropping a controversial duel with Sergei Kharitonov at Pride 33.

After a back-and-fourth first round that saw Mehman tee off with punches from the top position following a swing and a miss head kick by Ciesnolevicz, the Miletich-trained fighter pulled it together in the second frame and finished the overmatched Mehman with a guillotine choke at the 1:46 mark.

Gabe Lemley let a likely win escape his grasp with a bonehead move against Dan Loman. Having complete control of his dazed opponent and a dominant standing position over Loman’s back, Lemley delivered some punches before inexplicably backing off his opponent and giving him space to stand.

The kind gesture returned to haunt Lemley. Loman poured it on with punches, and Lemley (13-8), with his back to the cage, offered nothing as he absorbed strikes until referee Reid halted the action at 1:54 of the second round.

McGivern (13-6) scored an early takedown and never looked back as he overwhelmed his opponent on the floor. After giving up his back, Roderick (6-7) tapped quickly to the finishing hold.

Curran (4-1) ended the first and second periods similarly with slick armbars, only to have his efforts foiled in dramatic fashion. Hernandez, in his professional debut, defended well and was saved by the bell on both occasions. The beginner’s theatrics were not enough in the end, as the bout ended with official scores of 30-27 (twice) and 29-28 for Curran.