Duane Ludwig flexed his formidable striking muscle Friday with a punishing TKO over Sam Morgan in just over two minutes at Strikeforce “Payback” inside the Broomfield Events Center in Broomfield, Colo.

The K-1 veteran avenged a 52-second knockout Morgan scored three and a half years ago in the Ring of Fire promotion, much to the approval of his hometown crowd.

Morgan (19-12) wisely clinched and pulled off the takedown at the start of the 165-pound contest, but couldn’t keep the feared kickboxer grounded for long. “Bang” hit his mark less than 30 second later, crushing Morgan with a body shot and dropping him with a right hook before he pounced on Morgan and poured on more body shots. “The Ultimate Fighter 2” alumnus tapped out on his own accord at 2:01.

“I’m such a technical striker that I sit back on that,” said Ludwig, who improved to 17-8. “My partners we’re telling me I wasn’t in the gym. I just had to let it go and I guess it worked out.”

Frank Trigg outworked Falaniko Vitale to earn a well-deserved unanimous decision (29-28, 29-28, 30-27) in a middleweight co-main bout. Sherdog.com gave all three rounds to Trigg for a 30-27 tally.

At the top, Trigg (18-6) trapped Vitale (26-8) on the fence and fired off elbows and punches, most of which didn’t get through Vitale’s defenses, but certianly won the relentless Las Vegas resident the round. Vitale, who threw few punches throughout the contest, scored only once in the first five-minutes with a single takedown.

In the second set, Trigg stifled Vitale’s attempts to get in the game by keeping close quarters against the fence once again. The Xtreme Couture rep kept busy with punches in bunches, and then tied the Hawaiian up to sneak in rests in between.

Trigg, 37, lengthened his lead with a single-leg takedown at the top of the third. The bout looked nearly in the bag until Vitale landed a whopping right on its feet, then followed up with a takedown. Trigg refused to stay down though, and fended off Vitale’s last rally with a pumping right jab to set up his own takedown at the bell. 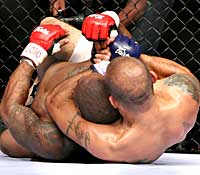 Isaac Hinds/Sherdog.com
Donny Liles submits Pete Spratt.
Donny Liles ensnared shifty striker Pete Spratt with a modified rear-naked choke to coax out the tapout 1:59 into the third round of their welterweight standoff.

An elusive Spratt optimized his distance early on and peppered Liles with crisp kicks to set up punching combos in the pocket. The barrage didn’t last, however, and Liles found his opening on the canvas as he attempted to end the proceedings with an armbar and than a rear-naked choke before the second-round clock ran out.

Liles quickly nailed the takedown in the final stanza and picked up where he’d left off, switching to a modified choke when Spratt countered the conventional maneuver.

“All my coaches told me don’t stand with him and to try and take him down,” said Liles. “This was kind of a test for myself to see if I could do it more than anything else.” 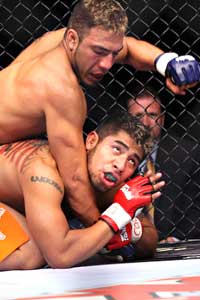 Isaac Hinds/Sherdog.com
Billy Evangelista (top) survived a
shaky opening minute to rough up
Luke Caudillo.
Luke Caudillo nearly snapped Billy Evangelista’s seven-fight streak just 25 seconds out of the gate with a stiff knockdown, but the Fresno, Calif. native rebounded with gusto to steal away a unanimous decision (29-28, 29-28, 30-27) after three rounds.

A groggy Evangelista buoyed from a second knockdown in a first tense minute, and managed to win back the round on at least one judge’s scorecard with a flurry of strikes on his turtled opponent at its end.

The American Kickboxing Academy lightweight continued to pick up momentum with an array of kicks, a third-round takedown and a persistent left jab. The performance kept his perfect record unblemished.

“I guess I started out a little too slow, so I got caught,” said Evangelista. “He got a good shot in, but my body kept saying, go, go, go. I just tried to grab whatever I could to get back up and get back in the game.”

Carlos Zevallos also survived an early knockdown at the hands of Andre Walker (1-4) to take a first-round TKO stoppage at 4:49 in his MMA debut. The light heavyweight pair exhibited considerable fatigue during a quiet four minutes that followed the initial ruckus, until Zevallos reversed a late takedown and settled into side control before passing to mount for the finish.

Michelle Waterson (4-3) didn’t disappoint her local contingent, as she nabbed a speedy 1:20 tapout over Tyra Parker (0-2) via rear-naked choke in their 112-pound bout.

The 5-foot-3 dynamo overwhelmed Parker on the fence and battered her with leather and two pinpoint knees to the head. Waterson then jumped Parker’s back and beckoned her to the mat.

In featherweight action, Tyler Toner (7-1) earned a second-round TKO over Ricky Johnson (0-2). Both landed frequently in the first set, though Toner gained footing with outside high kicks, hooks, and knees in clinch as the minutes wore on.

Countering a knee from Johnson with a takedown in the second round, Toney pounded out the 3:44 stoppage from mount.

Issac Hinds contributed to this report.