What a job, and what a scene to witness: a California State Athletic Commission representative tucked into a bathroom, watching as a hulking man relieves himself into a plastic cup.

Does he put it into a brown paper bag? What’s the protocol for spillover? Does he say, “Thank you”?

On July 21, in a story that’s quickly become to the MMA media what the moon landing was to Walter Cronkite, Josh Barnett was revealed to have failed his third drug test. (In 2001, he raised eyebrows in Nevada when he tested positive for performance agents for a fight with Bobby Hoffman. Because it was an informal survey of a possible drug problem in the sport, he escaped penalty. In 2002, he was stripped and suspended after coming up hot for three different anabolic agents for a fight with Randy Couture. It would be his last fight in the states for nearly five years.)

The first misstep cost him nothing but some privatized embarrassment. The second cost him a UFC title and a year out of commission. The third saw the chance for a California license disappear and essentially crippled Affliction’s promotional wing. It also denied Fedor Emelianenko the opportunity to compete against a man he had trained specifically for while depriving himself of personal indulgence for the last several weeks.

Fedor did not have ice cream. And Fedor cannot possibly be happy about that.

For those looking to sympathize: It is certainly possible to fail a urine test due to tainted supplementation. (Some producers intentionally “spike” product with powerful drugs to create hype; others use little caution in supervising cross-contaminated manufacturing plants.) A 2007 study by Informed Choice, a nonprofit organization, evaluated 52 over-counter products and found that 13 of them contained illegal pharmaceuticals.

But an athlete performing (and being paid) at a high level who claims his test booster did him in runs the risk of being seen as having a single-digit IQ. Lists of companies known to provide “clean” pills and powders are easily available online; athletes genuinely serious about their careers can have their own batch of magic pills audited. “Poor me” is an ignorant display.

Of course, none of this would apply in the case of an athlete who actually used steroids and wants to save face. It has become the sportsman’s Twinkie defense, a fairly hollow bit of repetition that fits the layman’s legal reaction: deny, deny, deny.

False positives do happen. But in Barnett’s specific case, it would have had to happen on at least three separate occasions. You decide how plausible that sounds.

Barnett’s dubious achievement this summer has been to become the first athlete in mixed martial arts to produce three irradiated cups of urine. We know that one flunking usually results in fan hissing, vanishing income and some residual venom. (See: Sean Sherk, Royce Gracie, Ken Shamrock, Chris Leben, etc, etc.) It appears as though getting caught is a deterrent to repeat the cycle. Not in this case. 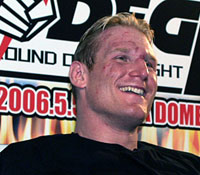 Masa Fukui/Sherdog.com
Back to Japan for Barnett?
Barnett’s future is murky. Because he technically didn’t get a license to compete in California -- the urine sample was part of a re-licensing procedure -- there’s nothing to suspend. But repeated positives could potentially affect any future license applications, a voiding that could conceivably be honored by most other states with commissions.

The worst case scenario is that Josh Barnett’s career in the United States will die in a urinal cake somewhere. But far more likely is Barnett providing a clean urine sample at some point in the future, regaining licensure and resuming his career without complication.

I would say that anyone testing positive on three separate days has no business in a ring or cage, regardless of any hair-splitting commission policy. But for a man who spent years in Japan and has a foot in that scene’s pro wrestling culture, it’s not as dire a problem as, say, a Sherk, who doesn’t have the size or interest in wrestling and never caught on overseas as a shootfighter.

But the Japanese scene is nowhere near as healthy as in Pride’s heyday: October’s Dream show will be the last on the Tokyo Broadcasting System channel, which creates serious doubt about their future; Sengoku is on better footing, but that’s due in part to their reasonable spending. In contrast to Pride’s substantial roster, only Hidehiko Yoshida and possibly Takanori Gomi stand out as fighters making an income there that would appeal to Barnett, who competed there twice. Whether they can still afford him is another matter.

Perhaps none of this bothers him a bit. Even if Affliction went through with their show, indications were that they were so cash-strapped that future events were in serious doubt. Barnett has had personality conflicts with UFC brass for years. Maybe he would’ve jumped on a plane regardless.

But the repercussions are less about geography. No matter what legal rabbit Barnett pulls out to cast doubt over the results, there will always be observers that consider his wins tainted and his legacy poisoned. If he is able and willing to fight stateside, I cannot imagine a circumstance in which the crowd would voice support of him. He would be a combat leper.

What a job, and what a scene. As Barnett submitted to policy and the commission member watched, did they realize that they were quite literally watching a man’s career circle the drain?