Josh Barnett (above, file photo) eyes a return to the UFC. | Dave Mandel/Sherdog.com


When Josh Barnett saw news of the impending marriage of the UFC and its closest competitor Saturday morning, the first thing he did was glance at his calendar.

“I had to double-check,” said the Strikeforce heavyweight. “I was like, ‘I know it’s not April 1.’”

And the deal is certainly not a joke. It will pair the world’s top mixed martial arts promotion with the organization that held the last significant collection of top-level MMA fighters not already under their banner, and Barnett is hopeful he will be part of that union.

“Things have changed,” said the former UFC champion, “This is major and great things can come from it and I just want to be a part of that, and the way I can best do that is be the best fighter I can be.”

There is a massive hurdle standing in the way of a Barnett-UFC reunion and that is the president of the company, Dana White.

Barnett and White have had a contentious relationship -- if you can call it that -- over the past nine years or so since Barnett, in quick succession, became the organization’s youngest heavyweight titlist by defeating Randy Couture in 2002; then reportedly made it clear he wanted to be paid more than anyone was being paid at that time and finally was suspended by the Nevada State Athletic Commission for allegedly testing positive for anabolic steroids in the Couture fight.

For his part, Barnett states that no matter what has been said in the past, he has respect for his former boss. He also hopes his performance in the cage will go a long way in proving he belongs on the sport’s biggest stage.

“I’m not here to make this a personal vendetta or judgment with [Dana], especially in terms of business,” said Barnett. “I know what I’ve got to do and I know what his position is in terms of being the president of the UFC, and that he has excelled at. He’s done a great job.”

And Barnett has a job in front of him that is first and foremost. That is winning the Strikeforce heavyweight grand prix.

One can’t help but think that it may be the only way for Barnett to find his way back into the Octagon, and it may be a long shot at that.

The volleys of vitriol between White and Barnett have been some of the most caustic dialogue ever recorded in the nascent sport’s young life. 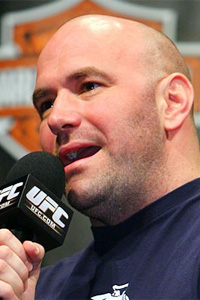 Dana White file photo
Barnett admires his former boss.
Barnett has, in the past, been a vocal critic of White and his company, and the UFC boss -- as we have all become accustomed to -- has fired back early and often. Barnett’s alleged three failed commission administered drug tests have been an easy target for the sharp-witted White.

Those public repartees may be a thing of the past if Barnett is successful in persuading his former archrival to allow him back into the Octagon. It would not be the first time White has extinguished a bitter feud. He and Tito Ortiz squashed a high-profile quarrel that had them set to fight a televised boxing match.

Barnett may or may not have been joking when he talked about getting a shot at White in a professional style wresting match, but it is clear as day that he is serious about getting back into the UFC. Competing against the best fighters in the world is what motivates him, and even a blind man can see that the UFC will soon be the only game in town for a fighter of his caliber to scratch the competitive itch that consumes him.

“If he hates me, he hates me; but if he sees the value in what I bring to the table as a fighter I think that will speak for itself,” he said. “But you know what? I don’t hate Dana and I do business, and I’ll go out there and do the absolute best that I can do and if he happens to be my employer … literally, if Dana White has an office that I have to write into every day, because that’s the person I report to for my business, well that’s what I’ll do.”

This is an amazing sea change from the notoriously recalcitrant Barnett and it doesn’t stop there. Perhaps reflecting on the uncertain nature of MMA, especially so in recent years, he made a point to commend the UFC for providing a stable platform for the sport to grow upon in North America. He even went as far as to state he may have erred in his handling of his divorce from the company.

“There is a part of me that absolutely wishes that things between myself and the UFC had worked out differently,” stated Barnett. “I was 23, 24-years-old at the time and I took advice from where I took it and I tried to do what I thought was the best thing at the time, but this guy that is sitting here talking to you now would tell that kid [that] he was a moron.

“But even still, I got to see and experience a lot of amazing things in my life even because of that. I could sit back and cry about it and really think what a horrible way this turned out, but my life has been really awesome. I’ve done a lot of awesome things and I’ve been a part of amazing moments of time and got to fight in amazing places and see amazing things and fight amazing fighters and I would never trade that in. The thing is, every step you take is forever. I’m going to do what I’ve got to do and I’ll try to do the best I can to avoid mistakes of the past and use those experiences to be better at everything I try to do in life.”

“
There is not a
single thing in
my life that
winning this
tournament will
not make a
difference with.

With all that said, Barnett, like so many others who have clashed with White, see quite a bit of themselves in the supremely confident UFC president.

“Dana likes to go out there and crush, kill, pillage, whatever; and let’s face it, that’s kind of my M.O.,” said Barnett in an admiring tone. “As much as I may have ever had difficulty with Dana at the end of the day there is a part of me that absolutely vibes with what he is does.

“Whether he wants to think about it or not, here and now, no bulls**t, Dana White is pretty f--king metal and I am a metal dude … we’ll at least have that sort of respect that can’t be overlooked.”

Noting his complete lack of control over the process of reconciling with White and the UFC, Barnett was clear in outlining his best chance of gaining any shred of influence in the matter.