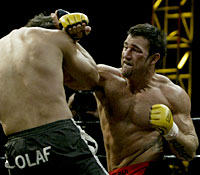 Jeff Sherwood/Sherdog.com
Phil Baroni (right) unloads a right
hand against Olaf Alfonso.
LEMOORE, Calif. -- Phil Baroni stayed on the winning track with a decision victory over Olaf Alfonso in the main event at Palace Fighting Championship 10 on Friday at the Tachi Palace Hotel and Casino.

Alfonso cut Baroni early in the first round, but from that point forward, it was all “New York Bad Ass.” Baroni stalked Alfonso (7-9) around the ring and punctuated good shots with nice takedowns. In the end, Baroni earned a unanimous nod from the judges in a main event that failed to live up to expectations.

Afterward, Baroni (13-10) apologized to the crowd and pleaded for a rematch.

“I don’t think either one of us fought our best,” said Baroni, a victor in three straight. “We have to do this again. Please have me back, and I’ll knock him out.”

In what was billed as the “first main event of the evening,” Bryan Travers defeated Strikeforce veteran Jeremiah Metcalf by unanimous decision to capture the vacant PFC welterweight championship. All three judges sided with Travers by 48-47 scores.

The opening round provided proof that both men were blessed with amazing chins, as each fighter landed powerful shots that likely would have dropped others. Takedown attempts were few and far between, with both contenders content to swing away at one another.

The second round was all Metcalf (9-6), as he dominated Travers standing and on the ground. He landed the stronger shots and controlled the action when the fight hit the mat. Battered and bloodied, Travers retreated to his corner at the end of the round. Victory seemed unlikely. It would be the last time Metcalf held the advantage in the match, however. 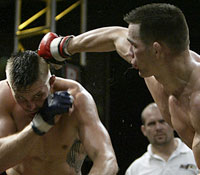 Jeff Sherwood/Sherdog.com
Bryan Travers (right) beats
Jeremiah Metcalf to the punch.
Travers (11-1) found his rhythm in round three and seized control of the bout. Metcalf appeared tired and slow when the round started. Travers used head movement and footwork to stay out of reach of Metcalf’s punches, and he repeatedly landed combinations to the body and head. The remaining two rounds played out in much the same manner, as Travers’ superior conditioning became more of a factor and allowed him to pick apart his opponent.

On the verge of tears, Travers praised Metcalf afterwards.

"That guy is by far the toughest dude I've ever fought,” he said. “Believe it or not, I don't do this for the money, and that was the most fun I've ever had."

In a match for the PFC bantamweight crown, Shawn Klarcyk proved too fast and too mobile on the ground for Brandon Miller, who could not seem to keep up. Klarcyk (9-2) dominated the first round and looked to make it a lopsided contest.

Miller (3-3) came out strong in the second and seemed to turn the tables until Klarcyk locked on an armbar that did obvious damage. Klarcyk, who has rattled off three consecutive victories, retained his title with a technical submission victory 2:19 into round two.

The battle for the PFC lightweight strap devolved into a mostly uneventful, one-sided affair.

The only trouble Brian Cobb had with David Gardner was finishing him. Gardner (14-10) unleashed little offense and exhibited no ability to defend a takedown. After five rounds of taking down Gardner, securing back control and dominating position, Cobb (13-4) remained the 155-pound champion with a unanimous decision victory. All three judges scored it 50-45 in his favor.

The featherweights provided the quickest match on the card. Joe Soto needed only 59 seconds to put away the overmatched Brandon Jinnies. He came out, took the fight to the ground and pounded away at Jinnies (3-10) for the first-round TKO. The unbeaten Soto (3-0) has finished all three of his opponents inside round one. 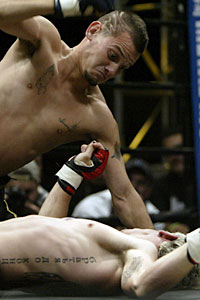 Jeff Sherwood/Sherdog.com
David Suarez (top) finishes off
David Mitchell after a brutal slam.
World Extreme Cagefighting veteran Antonio Banuelos made a successful promotional debut at PFC 10. Fighting out of The Pit, Banuelos (15-5) knocked out Bryan Goldsby 59 seconds into the second round. Banuelos controlled the bout from start to finish, as he handed Goldsby (4-4) his second loss in three fights.

Heavyweight Lavar Johnson made quick work of Vince Lucero. He ended it with a right hook 1:16 into the first round, as Lucero (19-15) attempted to stand. Johnson (9-2) has won nine of his last 10 bouts, including two in a row.

A flyweight match between David Mitchell and David Suarez ended just as decisively. Mitchell (1-1) secured back control on a standing Suarez (2-1) early in round one, only to be slammed backwards. The impact knocked out Mitchell 75 seconds into the fight.

Finally, Cage Rage veteran Xavier Foupa-Pokam made a successful stateside debut, as he submitted the American Kickboxing Academy’s Richard Montoya with a first-round armbar. Obviously overmatched, Montoya (6-5) never threatened Foupa-Pokam (18-9), as the Frenchman ended the match 1:13 into the opening round.