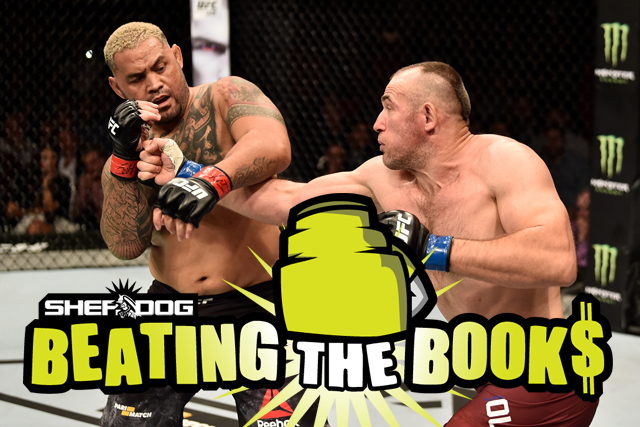 It looked for a while like there were not going to be any upsets at UFC Fight Night 136 on Saturday at Olimpiysky Arena in Moscow. The card was littered with mismatches, many featuring homegrown Russian fighters against foreigners, and many of the betting lines were unsurprisingly lopsided. In fact, the first 10 fights on the card saw the betting favorite come through with a win. However, this is MMA, and it’s rare to see an event where all the favorites emerge victorious. Two underdogs beat the books and cashed in at UFC Fight Night 136.


The main event saw a mini upset, as Alexey Oleynik submitted Mark Hunt with a first-round rear-naked choke. The betting line closed with Oleynik as a small underdog, but after seeing how the fight played out, he probably should have been given more respect by the bettors. After trading blows with Hunt early in the fight, Oleynik managed to rock Hunt with a punch and then get him to the mat, where put his dominant grappling skills to use with a beautiful fight-ending submission. Overall, it was Oleynik’s 57th professional victory and his 45th via tapout. On the other hand, it was the first submission loss for Hunt since he tapped to Sean McCorkle in his Octagon debut back at UFC 119 in 2010. Though Oleynik was the underdog in this fight, it seems likely that bettors will pay him more mind in the future after the win over Hunt pushed his Ultimate Fighting Championship record to 6-2.


The other upset on this card took place in the co-main event, where Jan Blachowicz earned the win as the underdog with a second-round arm-triangle choke on Nikita Krylov. With Krylov coming back to the UFC after winning four straight fights in Russia and with his being nine years younger, bettors backed him in this bout instead of going with Blachowicz despite the fact that the former KSW champion was on a three-fight winning streak in the UFC. Although Blachowicz is 35, he has improved his overall game, especially his submissions. We saw it first against Devin Clark three fights ago, and we saw it again against Krylov. Blachowicz can still stand and bang -- as we saw against Jimi Manuwa and Jared Cannonier -- but his surprisingly dominant ground game might be how he finally secures a title shot in the weak UFC light heavyweight division. He has been an underdog a lot lately, but his latest victory should earn Blachowicz a crack at another Top-10 opponent in his next fight. It was Krylov’s fifth loss by submission. An offensively gifted young fighter, his suspect submission defense will continue to hold him back until he improves. After what unfolded between Blachowicz and Krylov, it comes as a surprise in hindsight that the Ukrainian was the favorite.

Adam Martin is a mixed martial arts journalist who has been covering the sport since 2011. He is currently the lead odds analyst for Sherdog.com as well as the lead staff writer for MMAOddsbreaker.com. Adam is also the co-host of “The Parting Shot Podcast” on iTunes. His favorite fight of all time is Dan Henderson vs. Shogun Rua and he wishes Pride never died. Adam is based out of Toronto, Ontario, Canada, and he is a graduate of the University of Toronto and Centennial College. Get in touch with him on Twitter @MMAdamMartin.
« Previous Fight Odds Prime Picks: UFC Fight Night 136 Next Fight Odds The Insane Prop Bets of UFC Fight Night 136 »