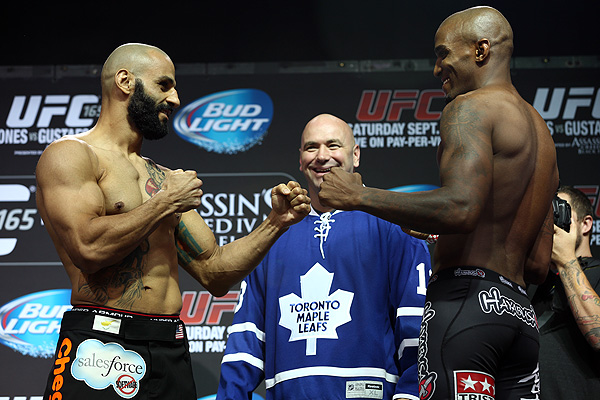 
Francis Carmont made the most of his opportunity at UFC 165 on Saturday and thumbed his nose at the oddsmakers while doing so.

In arguably the most surprising upset at the Air Canada Centre in Toronto, Tristar Gym’s Carmont, a +135 underdog, overwhelmed Costas Philippou (-155) in their middleweight showcase. He utilized takedowns and ground-and-pound in capturing a lopsided unanimous decision, handing the Cypriot his first loss in more than two years. Carmont has won 11 straight fights, six of them in the Ultimate Fighting Championship. 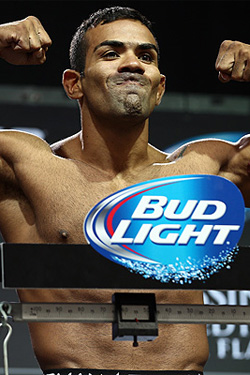 Photo: Dave Mandel/Sherdog.com
Prazeres beat the odds at UFC 165.
That Brazilian jiu-jitsu black belt Michel Richard Cunha dos Prazeres was a +105 underdog in his undercard bout with newcomer Jesse Ronson (-125) can perhaps be blamed on a recent decision defeat to Paulo Thiago.

Nonetheless, Prazeres emerged with a split decision over the man they call “The Body Snatcher.” Although Ronson was the favorite on paper, it is worth noting that he stepped in as a late replacement for the injured Mark Bocek and that Prazeres lost his promotional debut while competing as an undersized welterweight.

Although “Trator” still appeared to tire in the final round, fighting at 155 pounds paid off for the Brazilian, as he utilized solid takedowns and grappling skills to post his 17th win in 18 career bouts.

Meanwhile, Mitch Gagnon looked surprisingly sharp for a fighter who had not set foot in the cage in almost a year. There were no signs of ring rust for the Canadian, as it took the +140 underdog 4:05 to finish the previously unbeaten Dustin Kimura (-161) in impressive fashion.

Gagnon recovered from a wicked shot to the liver and turned the tide, choking the Hawaiian unconscious with an arm-in guillotine. The Team Shredder representative earned “Submission of the Night” honors for his efforts, beating out “The Ultimate Fighter” Season 10 finalist Brendan Schaub and the brabo choke he used to put Matt Mitrione to sleep on the main card.

Finally, Wilson Reis, at +112, was a slight underdog to Ivan Menjivar (-133) in a matchup he won by unanimous decision. A former EliteXC champion, the Brazilian southpaw stepped in as a replacement for the injured Norifumi Yamamoto. Reis weathered “The Pride of El Salvador” in the first round, answering with takedowns, a heavy top control and ground-and-pound over the final two frames. The 28-year-old Reis has rattled off five wins in a row.