DALLAS -- Vitor Belfort continued his resurgence Saturday with a victory over Rich Franklin in the main event of UFC 103 at the American Airlines Center.

Belfort landed a winging left early that looked like a grazing shot, but it dropped Franklin to his knees. The Brazilian then swarmed with heavy punches until Franklin went limp. Referee Yves Lavigne stopped the bout at 3:02 of the first round.

While the finish was explosive, initially Belfort had the crowd wondering which version had shown up in Texas. The inconsistent but talented mixed martial artist has long frustrated fans. The hesitant, reluctant to engage Belfort seemed to be the one standing across from Franklin for the first couple of minutes of the bout.

He answered any and all questions about his mindset and training in an instant, though, when he floored Franklin and finished him. UFC President Dana White had speculated before the fight that Belfort, should he win, would make a great opponent for middleweight champion Anderson Silva.

“I’m here to work,” Belfort said of a potential matchup. “Anderson’s my friend. I like him as a fighter. A great fighter. But if Dana (White) and Frank (Fertitta) decide … I’m an employ and I’m here to fight anyone who steps in the ring.”

Franklin (25-5) never found his rhythm as Belfort easily eluded him throughout the round.

“Losing wasn’t part of my plan,” Franklin said, “so I’m just going to have to let the dust settle and figure out what’s going on.” 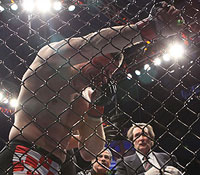 Dave Mandel/Sherdog.com
Cro Cop suffered an eye injury.
Junior dos Santos stopped Mirko “Cro Cop” Filipovic in the third round by verbal submission after Cro Cop told referee Dan Miragliotta he could not see following a right hand that had landed to his eye socket.

Dos Santos (9-1) was the aggressor from the opening bell. He threw punches and kept Cro Cop off balance, not letting him get his vaunted left leg kicks off for the most part. Cro Cop threw a few, but none landed flush.

Despite a solid first round, dos Santos had a developing mouse under his left eye. He was not deterred. The young Brazilian kept moving forward.

Cro Cop (25-7-2) started moving into dos Santos, closing his striking distance. This slowed dos Santos down for a moment, but Cro Cop’s left kick to his groin midway through the second frame slowed him even more. After a short rest, dos Santos motioned he was OK to continue.

The top heavyweight prospect changed up his strategy to start the third and final round. He worked to the body, and it paid dividends immediately. Cro Cop began to wobble after a series of punches and knees to his midsection found their mark.

Dos Santos pushed him up against the cage and kneed to the body. From there he moved upstairs and landed the punch that ended the bout. Cro Cop staggered and pawed his eye before looking at Miragliotta, who stopped the bout at the 2:00 mark of the round.

Paul Daley’s UFC debut was a successful one. He defeated Martin Kampmann by TKO in the opening round with a barrage of punches that prompted referee Yves Lavigne to step in despite the fact that Kampmann was still on his feet. 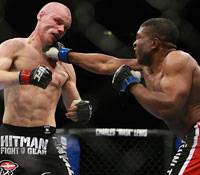 
Daley (22-8-2) was aggressive throughout the short welterweight fight. He moved forward consistently, throwing Kampmann off balance and forcing him to answer his punches while retreating.

Near the halfway point of the period, Daley landed a left hook that sent Kampmann stumbling backward into the cage. He seemed to have righted himself, but Daley would not relent. The British welterweight pummeled the Dane with another left hook that wobbled him again and then unloaded the fight-ending salvo of shots that brought Lavigne to the rescue at 2:31 of the frame.

Kampmann (15-3) was visibly upset with the decision to stop the fight. He conversed with Lavigne before walking with disgust to the center of the cage for the announcement.

“A very just decision,” Daley said of the stoppage. “The referee obviously saw … that his eyes went a couple of times. He was only trying to protect his health. I would have hurt him, so good stoppage.”

Trigg pushed forward during the brief fight, but it was Koscheck who landed the telling blows. Koscheck (13-4) connected with a big right hand that crumpled Trigg (19-7) to the mat, where Koscheck fed him right hands until referee Leon Roberts decided he had seen enough.

“I know there’s a guy who just signed a new contract,” said Koscheck when asked what might be next for him. “His name is Matt Hughes. I’ve been asking for that (fight) for a long time.”

Tyson Griffin dropped Hermes Franca with a straight right lead and followed him to the mat, where he finished him with punches at 3:26 of the second round of their lightweight matchup.

Griffin (14-2) set up the big punch with a right leg kick. When Franca dropped his hands, he planted him with the right. Franca did what he could to defend, grabbing Griffin’s leg in hopes of a submission and trying to establish his guard, but the volume of shots being directed his way overwhelmed him.

Griffin turned out the lights with another right hand to the chin on the ground, and referee Yves Lavigne stepped in to save Franca.

The first period was a bit slow with Franca (19-8) keeping his distance, wary of Griffin’s takedowns. The crowd may not have liked the chess match, but Griffin showed a varied, technical striking arsenal.

Franca looked soft and slow throughout the match but was game. He had problems making the 155-pound lightweight limit, and the bout was changed to a 159-pound catch weight. He had his best output early in the second when he and Griffin traded big punches, but the finish came not long after.

“My corner told me between rounds, ‘Be patient and you’ll get him.’ So I was patient,” Griffin said, “and when I dropped him, I went to work. I didn’t stop until the ref pulled me off.”

Efrain Escudero stopped Cole Miller with a brutal flurry of punches after stunning and knocking him to the mat in the first round of their lightweight match.

There was a lengthy feeling-out period that had the crowd a little restless, but Escudero (12-0) changed that with a right hand that left Miller (15-4) stumbling backward. He followed up with another that floored the jiu-jitsu expert before finishing him with a pair of right hands and a left. Referee Yves Lavigne intervened at 3:36 of the frame.

Escudero was returning from a rib injury that had sidelined him since December of last year.

Tomasz Drwal made a successful drop to the middleweight division with a submission victory over slugger Drew McFedries early in the second round.

Drwal (17-2-1) set a quick pace that left McFedries huffing and puffing midway through the opening round. He took advantage of his conditioning edge, out-striking the dangerous southpaw and opening a mouse under McFedries’ left eye in the first round.

McFedries (8-6) had his moments, but they were few and far between. With 90 seconds left in round one, he delivered a flurry of punches that had Drwal backing away at a fevered pace.

Drwal answered by taking the fight to the mat, where with seconds left he mounted McFedries but could not beat the horn with a rear-naked choke attempt.

The second round opened with a nice left-right combination from Drwal, who was now clearly beating McFedries at his game -- striking. He then notched a takedown into side control. McFedries gave up his back, and Drwal sank the fight-ending rear-naked choke at 1:03 of round two.
Click here to read about UFC 103's prelim bouts.