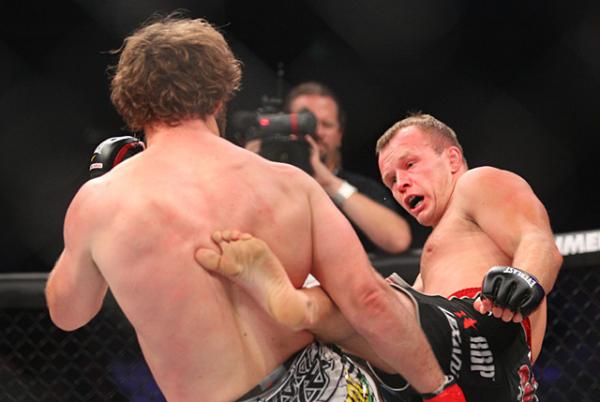 
Bellator MMA will conclude its ninth season on Friday, when Bellator 109 goes down from the Sands Casino Event Center in Bethlehem, Pa.

Topping the Bellator 109 festivities will be a middleweight title conflict between two of the promotion’s most ferocious strikers in Alexander Shlemenko and Doug Marshall, as “The Rhino” looks to end the champion’s 11-fight winning streak live on Spike TV.

Here is what to watch for at Bellator 109:


Shlemenko is the proud owner of several of Bellator’s most violent finishes and has lost just once in his last 18 outings. As far as I can tell, the 29-year-old is incapable of putting on a boring round, much less a boring fight.

Look no further than Shlemenko’s most recent title defense against Brett Cooper for proof of his abilities. After dropping the first two rounds to the American, “Storm” battled back over the bout’s final 15 minutes, gutting out a unanimous decision through sheer force of will.

My roommate is not a big MMA fan, but you would not have known it that night. He was screaming at our TV like a maniac. Do I really need to twist your arm on this one? I would hope not.


A good friend of mine in this business, who is generally much smarter about picking fights than I am, thinks Marshall is going to put it on Shlemenko when they get in the cage.

While I do not agree with that appraisal, I will certainly admit that “The Rhino” possesses the required tools to end Shlemenko’s night, especially during the fight’s opening round. Few men at 185 pounds possess the type of pure punching power that Marshall leisurely wields before fatigue catches up to him.

This is especially compelling given Shlemenko’s tendency to leave himself exposed in order to dish out punishment. Should Marshall find the Russian’s chin early in the contest, it is reasonable to assume that he will fasten the Bellator middleweight title around his waist shortly thereafter. However, if “Storm” can make Marshall miss and drag him into deeper waters with his vaunted body attack, I see few scenarios in which the ex-World Extreme Cagefighting champion can best Shlemenko.

Can Marshall get off first or will he become just another name on Shlemenko’s list of conquered foes? 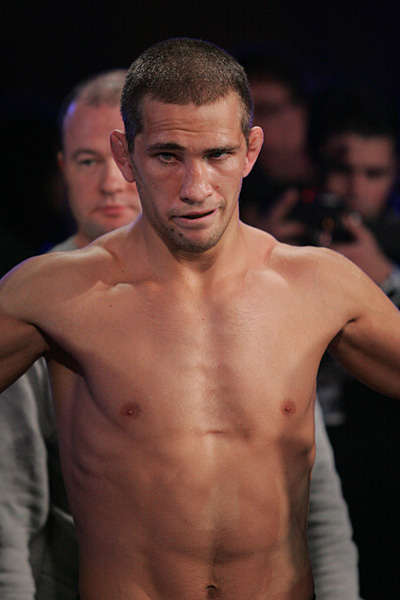 Photo: Keith Mills/Sherdog.com
Sarnavskiy is 25-1.
I am really looking forward to the Season 9 lightweight tournament final, and you should be, too.

Will Brooks’ tournament wins over John Alessio and Saad Awad may not have been the most aesthetically pleasing performances for the casual observer, but I was nevertheless impressed with his ability to dominate those veterans -- one of which had previously knocked him senseless during the Season 8 draw.

Meanwhile, Alexander Sarnavskiy has been on an absolute tear since suffering the lone loss of his career to Rich Clementi, posting first-round stoppages in each of his last three bouts. The 24-year-old Russian has recorded just two minutes and 48 seconds of cage time during his Season 9 tournament run, knocking out Marcus Davis in the quarterfinals before submitting Ricardo Tirloni in just 68 seconds in the Round of 4.

Both prospects undoubtedly hold great promise, but only one can earn a title shot. Which man will avoid his second career defeat?


Ron Keslar has gone from injury replacement to tournament finalist in the span of just two months.

Stepping up on short notice for the injured and then-retired Matt Riddle, Keslar outworked Luis Sergio Teotonio da Fonseca Melo Jr. in the tournament’s opening round before upsetting the favored War Machine in the semis. The American Kickboxing Academy rep dominated the Ultimate Fighting Championship veteran at Bellator 104, quickly taking Machine’s back and then showing excellent patience before putting the former adult film star to sleep with a rear-naked choke.

Keslar now faces former welterweight tournament finalist Rick Hawn, who also entered the Season 9 draw as an injury replacement. In spite of the circumstances surrounding his tournament bid, Hawn controlled both of his bouts from start to finish, cruising to unanimous decisions over Herman Terrado and Brent Weedman.

Can Keslar keep his winning streak alive or will Hawn slam the door on him?