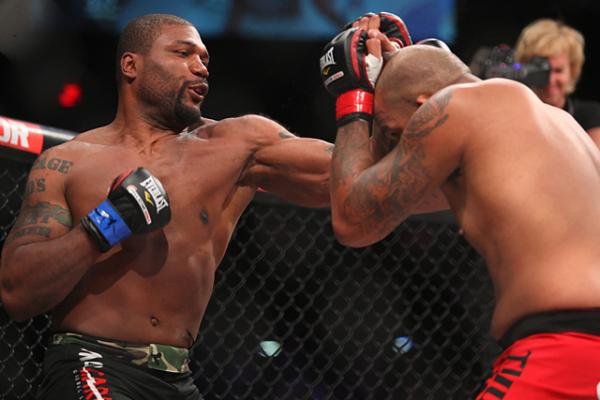 Quinton Jackson will serve as the centerpiece at Bellator 110. | Photo: Keith Mills/Sherdog.com


It seems like only yesterday that we were repeating words like “Jon Anik” and “ESPN Deportes” and “Lyman Good, welterweight champion” while discussing a startup promotion from Chicago called Bellator.

If you are anything like me, this has prompted you to visit YouTube and wistfully view some Season 1 highlights while listening to “The Way We Were” by Barbra Streisand. Remember, dear readers, that strong men also cry.

Nearly four years after what was then known as Bellator Fighting Championships broadcasted its first show via tape delay, the organization -- now owned primarily by media juggernaut Viacom -- will kick off its 10th season this Friday live on Spike TV. Bellator 110 takes place at the Mohegan Sun Arena in Uncasville, Conn., and is headlined by Quinton Jackson’s light heavyweight tournament debut against former champion Christian M’Pumbu.

Here is what to watch for at Bellator 110:


This is no doubt a big fight for Jackson, who will attempt to hit the light heavyweight limit for the first time in more than a year.

“Rampage” was last seen in November, when he knocked out Joey Beltran in their 210-pound catchweight duel at Bellator 108 -- a victory that snapped a three-fight skid for the former Ultimate Fighting Championship titleholder. Since signing with Bellator MMA, much of Jackson’s time has been spent rehabilitating his body, according to CEO Bjorn Rebney, who recently told the Sherdog Radio Network that Jackson’s knees were once again healthy and pain free, allowing him to “wrestle and slam guys again and do the things he used to love to do.”

Will we see a revitalized Jackson when he steps into the cage against M’Pumbu or will Bellator’s first light heavyweight champ avoid the power punching of “Rampage” and tire him out?


On the other side of the light heavyweight bracket sits Muhammed Lawal, who is no doubt hoping to rebound from his second defeat to Emanuel Newton.

First, I should point out that Lawal is by no means in a freefall. The former Strikeforce ace has won three of his last five fights. The issue is that I feel his two defeats to Newton -- the latter of which was fought over the Bellator interim title -- have resonated more loudly than his dominant victories over Przemyslaw Mysiala, Seth Petruzelli and Jacob Noe.

Even so, this presents an excellent opportunity for “King Mo” to come back with a vengeance. Two victories in this four-man tournament will earn him a shot at the winner of Newton’s unification bout with champion Attila Vegh. Can Lawal get past Mikhail Zayats and earn a spot in the Season 10 final?

Photo: K. Mills/Sherdog.com
Can Nunes return to form?
After losing three of his last four, Diego Nunes needs a win.

It was not so long ago that “The Gun” was looked upon as a legitimate contender in the UFC featherweight division. However, losses to Kenny Florian and Dennis Siver slowed his progress, and a 2013 move from Nova Uniao to X-Gym has left “The Gun” winless in his last two fights. The Brazilian was first outpointed by Nik Lentz to end his UFC run before being buried by Patricio Freire in his Bellator debut in September.

Now paired with 16-fight pro Matt Bessette, Nunes has the chance to halt his skid and advance in the Season 10 featherweight draw. Can he seize the opportunity?


I will stop writing about Mike Richman when he stops fighting like he just remembered he left his oven on.

In both victory and defeat, Richman has been a blast to watch, with “The Marine” standing in the pocket with little regard for his own well-being. Sometimes, this has worked to his advantage, as it did against Chris Horodecki and Jeremy Spoon. It also backfired on him in his appearance at Bellator 79, where he was punched out by Shahbulat Shamhalaev. Such is the risk-reward dynamic of fighting for the finish every time you step in the cage.

Richman’s last performance was arguably his most impressive, as the southpaw caught a clean right hook from Akop Stepanyan that put him on ice skates at Bellator 106. The American remained calm, however, and soon after countered Stepanyan with a blistering left hook that put the “Sniper” on the canvas and led to a stoppage.

Can Richman keep his momentum rolling as he steps into the cage opposite Desmond Green for his third featherweight tournament try?


Neither Daniel Weichel nor Goiti Yamauchi are receiving top billing at Bellator 110, but I could easily see both having a major impact in 2014.

A former M-1 Global lightweight champion, Weichel has won eight of his last nine fights, capturing the aforementioned title in 2011 before dropping the strap in his first defense. Since that setback, the 29-year-old has scored three straight victories, topping another former M-1 champ in Artiom Damkovsky one year ago at M-1 Challenge 37.

Prior to Weichel meeting Scott Cleave to open the Spike TV broadcast, Yamauchi will close out the Spike.com prelims with his quarterfinal showdown against Will Martinez. At just 21 years old, Yamauchi’s potential cannot be underestimated, considering he already owns 17 pro fights and 13 submission wins to his credit. Of mild concern is the fact that he missed weight for his Bellator 109 showing in November. Provided he does not repeat such a mistake, Yamauchi should be considered a live underdog in this featherweight draw.