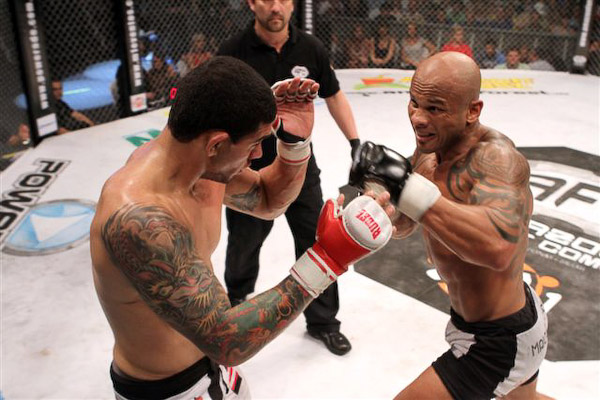 Bellator Fighting Championships returns to the state of Louisiana on Friday, holding Bellator 61 at the Riverdome at Horseshoe Casino in Bossier City.

Airing on MTV2 and Epix, the event features a heavyweight tournament final rematch, as well as a quartet of opening-round bouts in the Season 6 middleweight tournament. Its sixth season now in full swing, Bellator aims to break new ground by crowning tournament champions in five different weight categories. Here is what to watch for at Bellator 61.

About 16 months ago, Brazilian knockout artist Maiquel Falcao was riding high. A promising talent with tremendous power in his hands, Falcao earned his first UFC victory -- albeit under controversial circumstances -- over powerful middleweight Gerald Harris at UFC 123 in Detroit.

It would be his first and last Octagon appearance to date. Despite besting Harris, “Big Rig” was released by the promotion months later after a pending legal issue surrounding a 2002 assault charge resurfaced. A winner in two of his three fights since exiting the UFC, Falcao now has a second chance to show American audiences why 23 of his 28 career wins have come by knockout. Will he seize the opportunity in Bellator’s middleweight tournament?

Brian Rogers File Photo
Rogers had seven straight knockouts.
Speaking of second chances, two talented middleweights, Vitor Vianna and Brian Rogers, now have another shot to earn a crack at Bellator gold. What is the good news for fans? They must go through each other to earn that shot.

A Wand Fight Team representative, Vianna tries to channel his squad’s namesake in his own fighting style. Anybody who tries to emulate “The Axe Murderer” is going to be fun to watch, and Vianna is no exception. The Brazilian has finished nine of his 12 career victims, putting forth a solid performance in the Season 5 draw before ultimately coming up short against Alexander Shlemenko in a hard-fought tournament final.

Rogers also fell to Shlemenko in the Season 5 tourney, though his defeat came in the semifinal round. Shlemenko’s victory did not come easily, however, as “The Predator” appeared poised to punch his ticket to the final early in the bout after tagging the Russian with several clean shots. In the end, Shlemenko claimed his second tournament victory via second-round technical knockout, but Rogers fought to his last breath.

Not much else needs to be said. This is my pick for “Fight of the Night.”

Despite M-1 Global’s claims that Vyacheslav Vasilevsky is under contract with the Russian promotion, it appears that “Slava” will participate in Bellator’s sixth-season tournament as advertised.

The former M-1 light heavyweight champion, Vasilevsky enters the Bellator cage riding a substantial wave of hype. Perfect in his last 14 outings, the once-beaten sambo specialist has not lost since 2008. The Russian’s strength lies in his boxing and combinations, so do not expect to see a head kick knockout from the 23-year-old. Instead, look for his jab-straight and jab-uppercut combos to spell the difference if he can land them.

Despite his considerable abilities, the young gun occasionally exhibits the tendency to swing wildly and forget his otherwise reliable footwork -- a flaw that could be exploited in the tournament quarterfinals by former “Ultimate Fighter” contestant Victor O'Donnell, whose only official losses have come to Rogers, Constantinos Philippou and Marcus Vanttinen.

Will “Slava” live up to his billing, or will O’Donnell spoil the prospect’s anticipated debut on American soil?

Like it or not, specialists have been going out of style in MMA for quite a long time. Still, it is refreshing to intermittently watch a competitor rely on a single style or technique to consistently produce victories, defying the established wisdom that has come from years of competition and observation.

Like Strikeforce women’s bantamweight champion Ronda Rousey, Giva Santana is a fighter with a plan: find and arm and bend it until the referee says stop. A staggering 13 of the Brazilian’s 15 submission victories have come by armbar, including his most recent win in past October over Darryl Cobb in his Bellator debut.

Now, Santana faces Bruno Santos, a countryman whose record reflects a strategy in stark contrast to Santana’s. While “The Arm Collector” has finished all but one of his conquered foes, the unbeaten Santos has earned just one finish in 12 career outings. Can “Carioca” control his fellow Brazilian and grind out a victory, or will Santana snatch another appendage to display on his mantle?