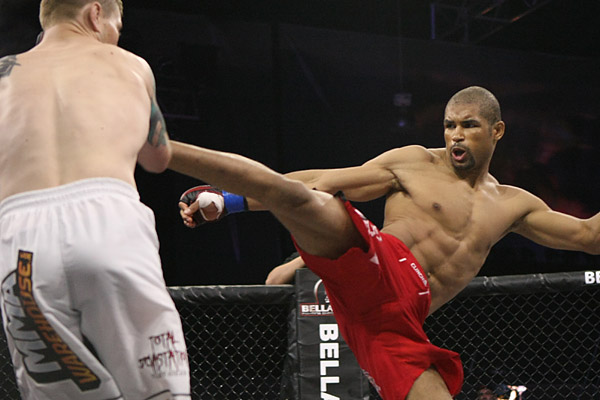 Bellator Fighting Championships on Friday returns to the Mohegan Sun Arena in Uncasville, Conn. Highlighted by the Season 6 welterweight tournament quarterfinals, Bellator 63 was expected to feature the promotional debut of UFC veteran Brian Foster. However, Foster was not medically cleared prior to the event and will instead remain on the sidelines as the tournament moves forward with replacement Jordan Smith.

Though Foster’s removal certainly hurts the quality of the card and the tournament, Bellator 63 still has enough meat on its bones to satisfy most MMA fans looking for a violent meal. Here is what to watch for during the MTV2 broadcast.


Foster was not the only UFC vet with plans to make a splash. Ben Saunders is back for another taste.

The owner of everyone’s second-favorite Thai plum, Saunders, 28, fought his way to the finals of Bellator’s Season 5 tournament, only to be knocked cold by heavy-handed prospect Douglas Lima. Prior to that Nov. 12 defeat, “Killa B” had shown a little bit of everything in the Bellator cage, punishing Matt Lee and Chris Cisneros with his lanky standup attack before using an active guard to stifle jiu-jitsu ace Luis Santos en route to a third-round submission victory.

Can the American Top Team Orlando representative succeed where he previously failed and take home the Season 6 tournament title?


As a welterweight debutant, Bryan Baker will hit the ground running at Bellator 63.

A two-time middleweight tournament participant, “The Beast” cruised to the Season 2 finals but was knocked out by an unfriendly Alexander Shlemenko. The American gave it another go in Season 5, bombing Jared Hess in the quarterfinals in September before getting clipped by Vitor Vianna in the semis.

Now an undoubtedly slimmer fighter, many questions oppose Baker prior to his Bellator 63 appearance. Will he be stronger? Faster? Will his ability to deliver and receive hard shots be noticeably affected? How will the weight cut affect his stamina and explosiveness? All these queries will presumably be answered in Connecticut. Initially expected to square off with UFC veteran War Machine, Amoussou was paired with replacement Chris Lozano after the man formerly known as Jon Koppenhaver was sentenced to another one-year term in jail.

After a disappointing Bellator debut that saw him edged by Sam Alvey in May, Amoussou rebounded with a technical knockout victory over Jesus Martinez in a 175-pound catchweight contest on Nov. 26. With that trial run now in his rearview mirror, can Amoussou work his way down to the welterweight limit? And what type of noise will he make if he arrives at 170 pounds with no issues?

Back on the Horse


Any fighter who steps into the cage or ring is worthy of respect for placing his body and mind on the line for the amusement of others. No matter how good a fighter thinks he is or how well he has prepared, unknown elements seem to have a way of crushing dreams and denying even the hungriest of competitors. In the blink of an eye, a fighter can go from standing and alert to horizontal and, well, not alert.

This is what happened to Lozano at Bellator 53. After a sharp performance in the quarterfinals earned him a win over Brent Weedman, Lozano traded blows with Lima in the first frame of their semifinal pairing. As round two wore on, Lima’s shots began to land with greater frequency, closing Lozano’s left eye. Likely unable to see the punch coming, the Ohio native was leveled with a vicious right hand that dropped him to the mat and ended his second tournament run.

With Lima now set to challenge welterweight champion Ben Askren next week, can Lozano make a statement in the Season 6 draw and line up a potential rematch with “The Phenom?”


Most observers will be unfamiliar with Carlos Alexandre Pereira when he sets foot in the Bellator cage. Here is a short story that may or may not improve the viewing experience.

After reporting that “Indio” had signed with Bellator, I learned that the Brazilian was slated to make his debut on Nov. 19. Obviously, that booking never came to fruition.

I was disappointed. Reporting a bout or an appearance that does not become reality is never a good thing. As a result, I started digging around. While the promotion never actually announced that Pereira would compete, the word on the street was that the organization struggled to find someone willing to compete against the Shooto South American 183-pound titlist. I got in touch with one source close to the fighter who wasted no time in explaining the situation.

At Bellator 63, fans will have the opportunity to judge for themselves, as the hard-hitting Brazilian finally makes his promotional debut against Baker, a man not known for moving backward in the cage. Can ‘Indio’ earn his 34th career victory, or will Baker conjure up memories of Pereira’s 2010 knockout defeat to current UFC talent Siyar Bahadurzada?