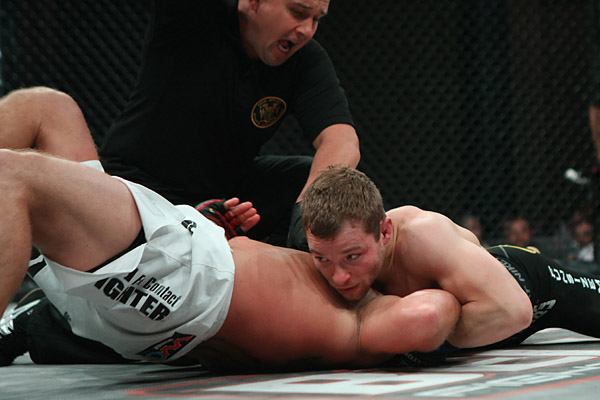 You know the story, kids. Bellator puts on fights, and I tell you what to watch for. This week is an especially easy edition to sell, as six exciting bantamweights are set to square off at Bellator 65. Hosted by the Boardwalk Hall in Atlantic City, N.J., the event will also showcase a tasty featherweight semifinal in addition to a pair of pivotal welterweight undercard attractions. Next to reruns of “Martin,” this is as good as it gets on MTV2. Keep your eyes peeled for the following:


If you aren’t psyched at the prospect of watching Zach Makovsky and Eduardo Dantas throw down for 25 potential minutes, then I don’t even know what to tell you. Go watch ice skating or something.

Honestly, this bantamweight title fight is probably going to steal the show on Friday night. That’s not a diss on any of the other fights on the card; it’s just the truth. In Makovsky, you have one of Bellator’s best wrestlers, pound-for-pound. Add to that a toolbox of ever improving standup and submission skills, and it stands to reason that “Fun Size” is a scary fight for anybody at 135 pounds.

Likewise, Dantas has also fought through the inherent challenges of winning an eight-man tournament, and he looked like a boss in doing so. At only 23 years old, this young man has nearly limitless potential and holds the speed and pinpoint striking necessary to give the champion serious problems in his inaugural title defense.

Who will walk away with the gold?

Ed West File Photo
West is in for another go-around.
While the first half of Bellator’s 135-pound bracket contained a foursome of talented newcomers, the remaining two quarterfinals sport some familiar faces.

Two-time tournament veteran Ed West is back for another go-around, taking on fellow Season 5 semifinalist Marcos Galvao. Two rangy bantamweights, both men possess precision striking from the outside and own excellent submission games. My guess is that West will hold a slight speed advantage and would be wise to utilize his active footwork to try to frustrate Galvao, who should look to set a pace with his jab and time his opponent as a means of using that movement against him.

Meanwhile, two of the division’s stoutest competitors will lock horns when Alexis Vila faces Luis Alberto Nogueira. Little needs to be said of Vila’s punching power. Suffice to say that it is real, and it is scary. Though “Betao” is not a man who typically backs down from firefights, it would behoove him to press for the takedown. Regardless of who implements his game plan, heavy leather should be thrown by both, and that is a good thing for you
folks in the La-Z-Boys.


If I could only use one word to describe the featherweight semifinal between Daniel Straus and Mike Corey, it would be “rugged.” Wait, I changed my mind. “Brawny” is definitely the word I would use.

This one might not end in a knockout, and it might not be the most aesthetically pleasing number, but this fight promises to be a war of attrition.

In Daniel Straus, you have a seasoned Bellator veteran with a seemingly tireless work rate. Pressure is the name of this man’s game, and he executes it beautifully. Though he never wrestled at the collegiate level, the former high school grappling standout uses his wrestling fundamentals aggressively, systematically breaking opponents down and grinding away their will to resist. Doesn’t that sound like fun?

Corey is cut from the same cloth. A former Marine, the Chicago-based featherweight battled back from adversity in his quarterfinal match with Ronnie Mann, picking himself up off the canvas to take a unanimous decision from the Brit. While Straus does not possess the hand speed and precision striking of Mann, the advantage Corey held in size and strength against the Brit now no longer applies.

Who will take one step closer to a featherweight title shot?

Best Times Behind Them?


For Lyman Good and Kris McCray, Bellator 65 must mean a hell of a lot. Both men once appeared on the rise, taking strides toward the next level of competition prior to stumbling on their paths to success. Now, they are presented with a chance to impress the Bellator faithful on the Spike.com undercard stream.

Bellator’s former welterweight champion, Good, 26, has lost two of his last three fights. After knocking out Omar de la Cruz to win the promotion’s inaugural 170-pound tournament, the Tiger Schulmann disciple relinquished his belt to Ben Askren in his first defense and was bounced from the Season 4 tournament by Rick Hawn via split decision in the semifinals one year ago.

Meanwhile, McCray, 30, fought his way to the finals of “The Ultimate Fighter” Season 11 only to fall by submission to Court McGee in the live finale. Two more Octagon losses would follow, as McCray was submitted by Carlos Eduardo Rocha in his welterweight debut before dropping a split verdict to John Hathaway and receiving his UFC walking papers. Nonetheless, “Savage” posted back-to-back victories in local shows to close out 2011.

Will Good and McCray make statements on Friday’s undercard, or will their struggles on the big stage continue?