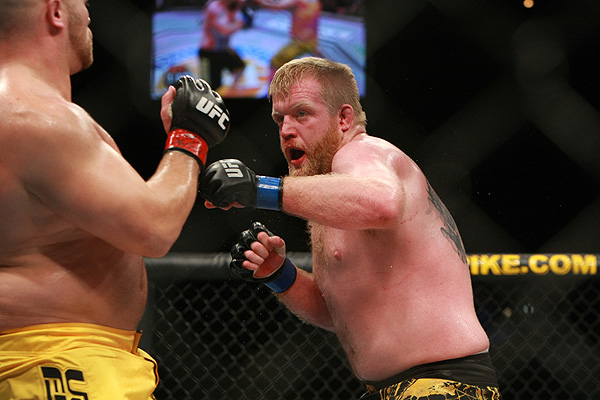 
The world of MMA can be an insular one. The sky is always falling, it seems, and it is easy to get lost in the labyrinthine noise of what so-and-so said or did. Clickbait and Soundbytes are the new Scylla and Charybdis. Following this sport can gently and cogently separate us from the rest of the world; indeed, escapism is the coquetry of most sports fandom. This reality is one thing for fans and media but quite another for the fighters themselves. That sense of emptiness and meaninglessness is exactly where Justin Wren’s story begins in his book, “Fight for the Forgotten,” co-authored by Loretta Hunt.

Best known as the youngest contestant and quarterfinalist on the most-watched season of “The Ultimate Fighter,” the book introduces Wren as a shy, unassuming kid. While the typical tropes are present in his story -- young kid gets bullied, finds his way through athletics -- the severity of his experiences is compelling. Wren would grow out of the physical and social awkwardness of his middle school and high school days, but he would continue to battle with depression and suicidal ideations well into adulthood.

Wren contours his personality through a slideshow of his beginnings in wrestling and MMA. From repetitious failure and stubborn determination on the wrestling mat -- which culminated in a comically accidental state championship -- to half-drunkenly stepping in for another fighter at the weigh-ins of a local promotion, Wren bucks the mold of most modern fighter narratives. All of these episodes build up to his breakdown, where Wren becomes self-loathingly addicted to drugs and alcohol. Through this, we see the lows of his highs, and even amidst his professional success, Wren is racked with a hollow sense of ennui. To see the suicidal underbelly of someone who appeared to be so affable on camera is genuinely heart-wrenching.

However, this is not the end of the story, nor is it the story that Wren sets out to tell at all. His personal struggles serve mostly as a backdrop to his remarkable transformation.

Most of the book is spent knee-deep in the vines of the Congo. While the grim reality of life in the Congo is extreme for just about everyone in the country, Wren details his time with one of the most vulnerable, most exploited people groups that almost nobody knows about: the Pygmy tribes. Any hardship Wren endured as an oft-bullied child is immediately dwarfed by the incomprehensible tragedies the Pygmies suffered. What is clearly the most repulsive crime against them, being forced to watch marauding soldiers perform unspeakable acts before cannibalizing family members in plain sight, is beyond the limits of even the most empathetic soul. Hunt and Wren rightfully spare the gruesome details of such atrocities, but readers will no doubt feel their stomachs tighten and blood boil as the history of the Pygmies is recounted.

In spite of the horrors they survived, Wren focuses mostly on the beauty of Pygmy culture. The amount of singing and dancing that goes on in their everyday life is enough to stir up bucolic yearnings in the most hardened city slicker. Yet the celebratory, gracious nature of the Pygmies belies a harsh reality of enslavement and squalor. In particular, the burden of disease weighs heavily upon them, making death a common occurrence. Wren knows the cost beyond the statistics. At one point, he nearly dies from a speedball concoction of malaria, typhoid and dysentery. The similarities between his near-death infection and suicide attempt do not go unnoticed.

Most of the book chronicles Wren’s fight to bring hope to the Pygmies. In a culture that considered Pygmies beasts of burden, the fight was more than clean water; it was as much a fight for dignity. Compared to his work in the jungle, Wren’s MMA victories became progressively meaningless. His is a feel-good tale of beating the odds that far surpasses any underdog or comeback story -- in any sport.

It bears mentioning that Wren is a deeply religious man, and as such, the book is unapologetically Christian. While religion is a sensitive subject and off-putting to many, Wren and Hunt do well to avoid any sort of pulpit, focusing mostly on how Wren’s faith was the vehicle for a powerful, positive change in his life. The Bible verses and Christianese phrasing sprinkled throughout can read like an elongated testimony, but it is easy to understand that Christianity is not only at the heart of this story but also the heart of the man himself.

For all of the book’s virtues, there is still criticism to be made.

In parts it feels scattered. Certain details and anecdotes start to meander at times -- away from the jungle and away from the truly captivating situations. One has to wonder whether some in-the-moment narration would have resonated more meaningfully than the default mode of exposition. This resulted in plenty of “this happened, and then that happened, and I wasn’t very happy about it” kind of passages, which frustrated some of the emotional connections readers will no doubt make while reading. Beyond that, there is an anticlimactic understanding that everything will be all right in the end. Of course, this is a good thing: These are real people, and they desperately need everything to work out fine. As a reading experience, though, it flattens what should be a crescendo of triumph at the end. Finally, Wren’s exuberance and frenetic optimism can start to get overbearing. However, even when Wren’s insight is a bit trite, it comes with a wink; if you are too cynical to appreciate the earnest convictions and enthusiasm that Wren has, it is not a fault of his.

“Fight for the Forgotten” is both readable and challenging all at once. It challenges the notion of coincidence, challenges preconceptions of what happiness and fulfillment look like. Most of all, it challenges people to fight for something bigger than themselves. For Wren, who returns to MMA for the first time since 2010 at Bellator 141 on Friday, the biggest fight he could pick was for the smallest among us.

In a sport riddled with negative press and obsessed with mind-numbing gossip, Wren and Hunt pull no punches in presenting a beautiful side of the sport and a beautiful side of life. It is a refreshing break from the norm. Together, they succeed in briefly bursting the MMA bubble and thrusting us into a world few will ever get to realize. They cast light on how the best of humanity blooms in the center of the heart of darkness. Wren may or may not be long for the world of MMA, but even if his legacy in the cage one day rusts into memory, his legacy outside of it will not be forgotten.