Jason Brilz pulls his weight, just like any true family man. He does chores, cooks meals and participates in group discussions when there are lessons to be taught or learned, all while he is on the clock.

In addition to being a light heavyweight contender in the UFC, Brilz has been a full-time firefighter for the Omaha Fire Department in Omaha, Neb., for more than four years. He will step into the Octagon against former International Fight League champion Vladimir Matyushenko at UFC 129 on Saturday at the Rogers Centre in Toronto, but he plans to be back at work the following week, putting out fires and saving lives.

Brilz and his co-workers also serve as emergency medical personnel for the city -- a part of the job that makes up the majority of their runs.

“Just recently, a lady had a heart attack at her work,” Brilz tells Sherdog.com. “And we come in, and I grab her and pull her out from underneath her desk. We started CPR, and we ended up getting a pulse back and establishing an airway. She walked out of the hospital two weeks later. Things like that are real neat.”

The fighter has found a balance between his two means of income, using his unorthodox schedule as a firefighter to his advantage. Brilz will typically stay at the firehouse for five consecutive days and then receive five days off. However, “off” probably is not the word most would use to describe his activities away from the station.

“It works out great. When I have my set of five days off in a row, I hit the training real hard. I’ll try to get two good workouts in each day. After that, my body is just drained,” says Brilz. “When I’m at work, we usually have some free time after 5 p.m., so I’ll get three solid rounds in. I’ll hit the bag at the station and shadowbox, jump rope and run on the treadmill. And then I’ll do a CrossFit workout.”

Brilz’s journey to meeting “The Janitor” started in 2000, during his first year as an assistant wrestling coach at his alma mater, the University of Omaha-Nebraska. Missing the competition of being a full-time wrestler, Brilz casually agreed to try “this fighting stuff” when a friend approached him about it, and the very next day, he received a call from a promoter. According to Brilz, he had no idea what to expect from the event, which lived up to most all of the classic “smoker” stereotypes. 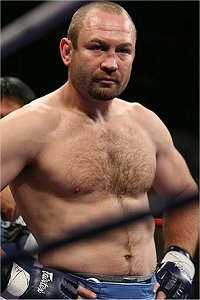 Vladimir Matyushenko file photo
Matyushenko is 25-5.
The North Dakota native entered the bout with little in his arsenal, save for his wrestling ability and a few judo techniques, including the fight-ending kimura he applied in the third round. As Brilz tells it, he was just as concerned with what was going on outside the ring as what was transpiring within the ropes. He had brought his family with him to the show. His fiancée, mother, grandmother and aunt were all in town for his wife-to-be’s bridal shower. Naively, he asked them to attend “this competition thing” that was taking place at the local armory.

“This was back when you could smoke inside, so everybody was smoking and drinking, and it’s a rough crowd. I had no idea what was going on there. They gave us some basic rules. My wrestling coaches were my cornermen, and they said to just keep my hands up and take him down,” recalls Brilz, who made only $100 for his efforts. “I go out, and this dude throws this head kick that breaks my arm within the first 20 seconds. But the adrenaline is going, so I take him down and I’m pounding on him. I thought it was so cool. It was my first real fight where I wasn’t worried about anybody breaking it up.”

Though his fight purse that night only covered one-third of his insurance deductible, the scrappy wrestler fell in love with the sport and continued to fight for another eight years, amassing a record of 15-1-1 before learning that the UFC planned to promote a show in Omaha. Speaking with fellow fighter and Nebraskan Ryan Jensen, Brilz acquired UFC matchmaker Joe Silva’s email address and sent him a grainy YouTube video -- his only existing fight footage. That proved sufficient to earn him a spot on the undercard at UFC Fight Night 15, where he defeated Aussie Brad Morris via technical knockout in the second round.

According to Brilz, the win was just icing on the cake. The true reward came from simply competing at the event.

“I didn’t even care if I won or lost. My first fight in the UFC was in front of my hometown. It was so cool,” says Brilz. “Even though it’s the biggest stage for fighting in the world, I’m never as calm as when I step into that cage. In all my smaller fights, or even if I’m just competing in a game or a wrestling match now, I get more nervous than I do before a fight. It’s weird, but I just enjoy the adrenaline rush so much that it’s hard to describe. It’s almost surreal.”

That adrenaline high has lasted for more than two years, as Brilz has done work in the UFC’s light heavyweight division. The fighter holds a 3-2 mark in the Octagon, but he could easily be undefeated, coming up on the short end of two razor-close split decisions to Eliot Marshall and Antonio Rogerio Nogueira. Though many feel Brilz won both bouts, he claims the losses do not really bother him.

“The winning and losing ... I don’t want to say it’s not important, but it’s not why I fight,” Brilz says. “I fight just because I enjoy it, and I’ve been fortunate enough to be decent at it and get on the biggest stage. I’m one of the very few who gets to do that. To me, that’s more important than a win or a loss.”

The other reason Brilz fights is for his family away from the firehouse. As a husband and father of two young girls, he has found himself in some awkward situations while fulfilling his dual roles as professional fighter and his family’s breadwinner.

“Some of the first letters my 6-year-old recognized were ‘UFC.’ She started saying, ‘My daddy is in the UFC. Just like that shirt,’” says Brilz, imitating his daughter’s voice.

Returning to his natural baritone, he explains that occasionally his second line of work will provide teachers and other parents with the wrong idea.

“[My daughter] goes to a Catholic school, so it’s a little awkward for me when she’s talking to her teacher [about my job], because they tell their teacher everything,” Brilz says. “She says, ‘My daddy’s going to Dallas for a fight.’ Try explaining that one to your Catholic teacher when I walk in to pick her up and I’ve got a black eye.

“Or I’ll take them to dance and tumbling [class], and I’ve got scratches all over my face,” he adds. “All these parents are looking at me like I’m this white trash guy, but what can you do? If that’s the worst that comes from it, then so be it. That’s not that bad.”

“
Some of the first
letters my 6-year-old
recognized were ‘UFC.’

Though he sometimes finds himself in funny situations, Brilz takes his family seriously. When asked about his greatest accomplishment in life, the Nebraskan, without hesitation, places his wife and daughters at the top of the list. When approached about what he would still like to accomplish in his life, however, Brilz was stumped.

After several indecisive moments, winning the UFC light heavyweight title was mentioned, though not in the context one might expect. In order to climb to the top of that mountain, he will first have to get by the durable Matyushenko.