The dying embers of the Sex Pistols’ punk classic “God Save the Queen” fade to silence, and the lights are cut throughout the arena. Chris Leben stalks the darkened cage. The sporadic flicker of flashing cameras briefly illuminate an expectant capacity crowd, the fervor of which builds to crescendo at a glimpse of the man the fans have come to see.

It is the first time a British fighter will carry an Ultimate Fighting Championship event in his native land. Roars of encouragement accompany the then 17-1 middleweight on his journey along the narrow path leading from the bowels of the National Indoor Arena in Birmingham, England, to the UFC-branded Octagon. Precedence has been set.

The perceived glass ceiling for British mixed martial arts fighters no longer exists. Season 9 of “The Ultimate Fighter” series revealed not only the highly colloquial nature of Northern English banter but also the increasing quality of young fighters in the U.K.

On Nov. 14, the UFC returns to England with a card bristling with British talent. Bisping, Dan Hardy, James Wilks, Paul Taylor, John Hathaway, Nick Osipczak, Ross Pearson, Paul Kelly, Andre Winner and Terry Etim are all slated to appear. Only Bisping and Wilks have reached the age of 30.

Add to that list the devastating Paul Daley, so impressive in his destruction of Martin Kampmann at UFC 103, and a promising group of young British fighters has assembled, poised to make an imprint on the world stage.

The palpable feeling amongst many British fighters is that this is a period of opportunity unlike any that has come before it. Progress in the U.K has been arduous. Before he became a headliner, Bisping struggled within the fledgling U.K. scene, having to supplement his fight career with a variety of professions, which included tiler, plasterer, slaughterer, postman, door-to-door salesman, demolition worker and upholsterer. MMA was a much less profitable and viable interest back then.

“Financially, it was very, very hard,” Bisping said. “At the beginning, it was about scraping a living. I would fight as often as I could just to pay the bills. When I first started, no one knew what MMA was. You would tell people what you do, and it was like, ‘Mixed Martial Artist? What’s that?’ It was only when you went to the lowest denominator of cage fighter that they understood, and then they thought you were a nutter.” 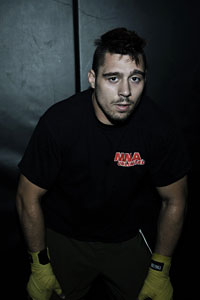 The correlation between popularity and quality can also be traced to improved training facilities. Paul Ivens, co-founder of the London Shootfighters gym has experienced such growth.

“Fighters these days have much more access to train like a professional,” he said. “MMA is much more popular as a whole, allowing gyms to operate full-time and the fighters to benefit from that. There are now full-time MMA gyms all over the country, which was never the case even a few years ago.

“London Shootfighters is a great example of the improvement of gyms alongside the growth of MMA,” Ivens continued. “Ten years ago, no one knew about MMA, and we were sharing a small 500-square-foot Aikido dojo, teaching a couple of times a week. Four years ago, we opened one of the U.K.’s first full-time MMA gyms with about 3500 square feet of space and classes every day. Now we have what I believe is the largest MMA gym in the world, with 35,000 square feet of space and over 35 lessons a week and nine coaches. The growth of the sport is attracting more people to it, and, accordingly, the talent pool is greater.”

Hardy stands as a prominent example of the enhanced benefits available to prospective fighters in Britain. A veteran of several domestic promotions, Hardy has seen firsthand the sizeable strides made during his five years of competition.

“The standard has advanced massively,” Hardy said. “Fighters are improving, and the lower level shows are better organized. It’s easier to find a place to train now, and there is more of a community around it, so there are plenty of people to help you out. Also, the money is a little better in the pro shows, and there are amateur and semi-pro fights now.”

Heightened quality has surfaced on more than just an international scale. Domestic shows are now laced with worthy lineups that blend experienced veterans with exciting newcomers. Unbeaten prospects such as Giorgio Andrews -- who will appear at the forthcoming FX3 event on Halloween -- and Ultimate Challenge UK light heavyweight champion Jimi Manuwa continue to impress and mark the emergence of more well-rounded MMA fighters in Britain. With training facilities and popularity continually improving, it may not be long before an ever increasing number of British fighters establish themselves on the world stage.

Hardy was also quick to emphasize the important role played by fighters like Bisping and UFC veteran Ian Freeman. Their success has offered a blueprint for prospective fighters.

“There is a distinct path to follow for young fighters today,” Hardy said. “You start on the smaller shows and know that you can progress through, depending on your success. A few years back, it was difficult to get the right fights; you just took what you could get.”