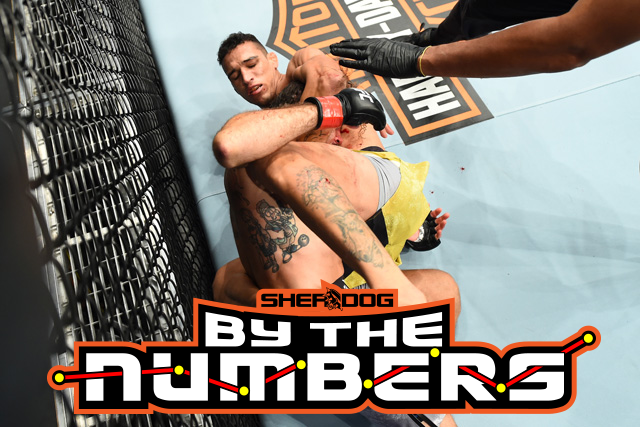 Charles Oliveira rebounded from a loss to Paul Felder by submitting Clay Guida with a first-round guillotine choke in June. “Do Bronx” will hunt back-to-back victories in the Ultimate Fighting Championship’s lightweight division when he faces the returning Christos Giagos at UFC Fight Night 137 on Saturday in Sao Paulo, Brazil.

Oliveira’s approach involves little secrecy, and the same can be said for the heavy-handed Giagos. However, they are polar opposites when it comes to how they go about their business. Ahead of their clash at UFC Fight Night “Santos vs. Anders,” here are some of the numbers that define Oliveira, a submission specialist of the highest order.

19: Years old when he first fought professionally. With nine finishes in his first nine fights, Oliveira clearly had a bright future ahead of him. He had just turned 21 when he was signed by the UFC.

14: Straight wins to start his professional career. Oliveira got his first taste of pro-level competition at a Predator Fighting Championship event in March 2008. There, he fought and won three times in one night to win a welterweight tournament tournament.

2: Wins in a row to start his UFC run. Oliveira submitted Darren Elkins at UFC on Versus 2 and did the same to Efrain Escudero at UFC Fight Night 22.

1: Round of battle with Jim Miller. Oliveira got a taste of his own medicine when Miller tapped him with a kneebar 1:59 into the first round of their encounter at UFC 124.

3: Occasions in which he fought multiple times in one night. Apart from the Predator welterweight grand prix, Oliveira fought and won twice on the same night at Korea Fight 1 on Dec. 29, 2008 and at Warriors Challenge 5 on Feb. 14, 2010.

1: Round needed to tap Eric Wisely in Oliveira’s featherweight debut at UFC on Fox 2. The Brazilian used a rare calf slicer to finish the bout at 1:43 of the first round.

8: Losses as a professional, all in the UFC. Oliveira has lost only to high-level competition: Miller, Felder, Donald Cerrone, Cub Swanson, Frankie Edgar, Max Holloway, Anthony Pettis and Ricardo Lamas.

15: Submission wins to his credit. Oliveira remains one of the most feared grapplers in any division. Apart from Elkins, Escudero and Wisely, his victims in the UFC include Jonathan Brookins, Andy Ogle, Hatsu Hioki, Nik Lentz, Myles Jury, Will Brooks and Clay Guida.

1: UFC victory in which he did not submit his opponent. In Oliveira’s 11 victories with the promotion, only Jeremy Stephens went the distance.

3: “Fight of the Night” bonuses banked. Oliveira went home with $150,000 extra following his two fights with Lentz and his confrontation with Edgar.

1: “Submission of the Year” award from Sherdog.com, the result of his 2014 anaconda choke on Hioki.

13: First-round finishes on his resume. Oliveira has a knack for finishing fights early, as he has shown five times inside the Octagon and eight others outside of it.