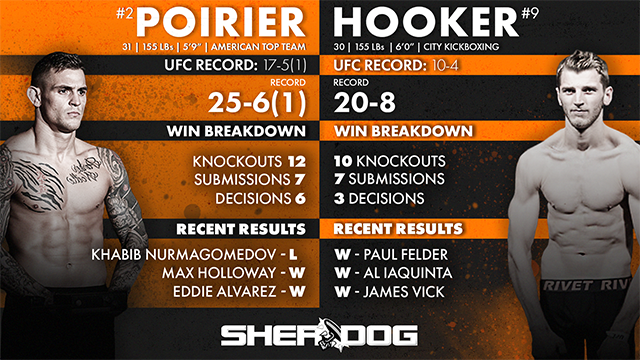 All signs point to a confrontation with off-the-charts potential for entertainment.

Former Ultimate Fighting Championship interim lightweight titleholder Dustin Poirier meets Dan Hooker in the UFC on ESPN 12 main event this Saturday at the UFC Apex in Las Vegas, where the winner will remain a clear and present danger to the rest of the 155-pound weight class.

Poirier saw his four-fight winning streak grind to a halt in a submission loss to undisputed lightweight champion Khabib Nurmagomedov at UFC 242 in September. The American Top Team standout owns a stellar 17-5 record inside the Octagon, his resume bolstered by victories over Max Holloway (twice), Anthony Pettis, Justin Gaethje and Eddie Alvarez. Poirier has never suffered back-to-back defeats in a career that now spans 32 appearances.

Hooker, meanwhile, rebounded from a brutal UFC on Fox 31 loss to Edson Barboza with consecutive wins over James Vick, Al Iaquinta and Paul Felder. The former Australian Fighting Championship titleholder joined the UFC roster as a featherweight in June 2014, moved to 155 pounds three years later and found another gear, rattling off seven victories in eight outings. Hooker operates out of the City Kickboxing camp in his native New Zealand, where he trains alongside current UFC middleweight champion Israel Adesanya.

As Poirier and Hooker make their final preparations, a look at some of the numbers that have come to define them:

19: Finishes for Poirier, accounting for 76 percent of his career win total. Three were of the sub-minute variety, as he submitted Ronnie Lis with an armbar in 51 seconds, stopped Zachary Micklewright with punches in 53 seconds and knocked out Derek Gauthier in 57 seconds.

6: Poirier victories by knockout or technical knockout, tying him with Donald Cerrone and Joe Lauzon for second on the UFC’s active list for lightweights. Only Barboza (seven) has more.

7: Submission wins on Poirier’s resume—three by armbar, two by brabo choke, one by triangle armbar and one by body triangle.

48: Seconds needed for Hooker to submit Mike Taylor with a rear-naked choke in his March 2009 professional debut. It remains the quickest stoppage of his 28-fight career.

3: Fighters ranked ahead of Hooker in the UFC’s official lightweight rankings, excluding the reigning champion (Nurmagomedov) and current interim titleholder (Gaethje). They are Tony Ferguson, Poirier and Conor McGregor.