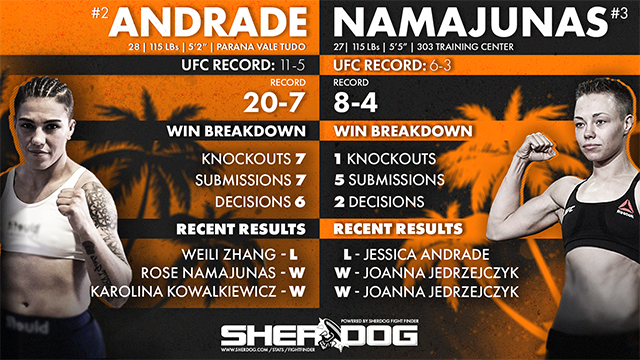 It ended with a sudden violence rarely seen in women’s MMA, as Jessica Andrade lifted Rose Namajunas off her feet and slammed her to the unforgiving canvas below. The impact separated “Thug Rose” from her senses in an instant, drew the curtain on their UFC 237 headliner and resulted in a changing of the guard atop the 115-pound weight class a little more than a year ago. Now comes the sequel.

Andrade—who later surrendered the Ultimate Fighting Championship women’s strawweight title to Weili Zhang—will rematch Namajunas in a featured attraction at UFC 251 this Saturday on Yas Island in Abu Dhabi, United Arab Emirates. The two former champions remain in the thick of the hunt at 115 pounds, and whoever emerges from their second encounter victorious figures to be at the front of the line to challenge Zhang for divisional gold.

As Andrade and Namajunas make final preparations for their rematch, a look at some of the numbers that have accompanied them to this point:

75: Seconds required for Andrade to put away Vanessa Silva with punches under the Heavy Fighting Championship banner in 2012. It remains the fastest finish of her 27-fight career.

3: Knockout losses on the Andrade resume. She succumbed to punches and knees from Kinberly Tanaka Novaes at Nitrix Champion Fight 11 on May 5, 2012, bowed to punches and elbows from Liz Carmouche at UFC on ESPN 8 on July 27, 2013 and yielded to knees and punches from Zhang at UFC Fight Night 157 on Aug. 31, 2019.

5: Namajunas wins by submission, accounting for 63 percent of her career total (eight). Not included: Her three submission victories on Season 20 of “The Ultimate Fighter,” as she tapped Alex Chambers with a kimura and dismissed Calderwood and Randa Markos with kimuras.

0.41: Knockdowns landed per minute by Namajunas, the highest rate by a women’s strawweight in UFC history.

8: Namajunas takedowns secured against Paige VanZant in their UFC Fight Night 80 main event in December 2015. It set a personal benchmark for “Thug Rose,” who also executed 14 guard passes before submitting VanZant with a rear-naked choke in the fifth round.

6: Total strikes by which Namajunas outlanded Andrade in their first encounter. However, Andrade outperformed Namajunas by a 30-1 margin in significant leg and body strikes.