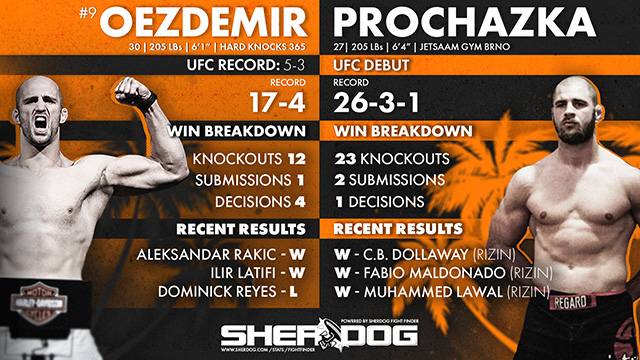 Oezdemir will confront the former Rizin Fighting Federation champion in the featured UFC 251 prelim this Saturday on Yas Island in Abu Dhabi, United Arab Emirates. The Hard Knocks 365 export enters the three-round clash on the strength of back-to-back victories over Ilir Latifi and Aleksandar Rakic. However, Oezdemir has his work cut out for him. On a 10-fight tear that includes nine finishes, Prochazka last tasted defeat nearly five years ago. A maniacally aggressive offensive fighter, he has delivered 25 of his 26 professional wins by knockout, technical knockout or submission.

As Oezdemir and Prochazka make final preparations for their three-round showdown in the Middle East, a look at some of the numbers that have accompanied them to this point:

12: Oezdemir wins by knockout or technical knockout, accounting for 71 percent of his career total (17). He also owns one victory by submission, as he tapped Mamadou Cisse with a kimura in his third professional appearance back in 2012.

5: Sub-minute finishes on the Oezdemir resume. He put away Martin Vath in 56 seconds, cut down Benyaich Mohamed in 15 seconds, dispatched Angelier Benjamin in 45 seconds, wiped out Misha Cirkunov in 28 seconds and handled Jimi Manuwa in 42 seconds.

26: Seconds required for Prochazka to dismiss Radovan Estocin with a flying knee and follow-up punches at a Gladiator Championship Fighting event in 2013. It remains the fastest finish of his 30-fight career.

1: Submission loss on the Prochazka ledger. He tapped to a rear-naked choke from Abdul-Kerim Edilov at Fight Nights “Battle of Moscow 12” on June 20, 2013.

55: Wins between the three opponents—Edilov (17), Bojan Velickovic (17) and Muhammed Lawal (21)—to which Prochazka has lost.