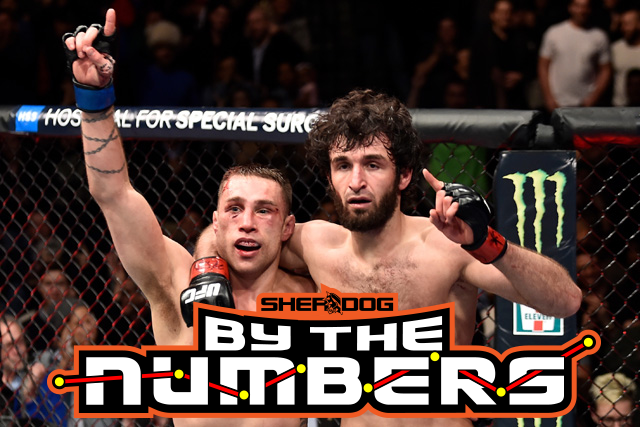 Despite the fact that Zabit Magomedsharipov has only three Ultimate Fighting Championship appearances under his belt, many see him as a future title contender at 145 pounds.

Originally booked to meet Yair Rodriguez at UFC 228 on Saturday in Dallas, Magomedsharipov was instead forced to settle for short-notice replacement Brandon Davis when “Pantera” withdrew due to injury. Will he respond favorably to the change when the cage door closes at the American Airlines Center?

Ahead of Magomedsharipov’s latest outing, here are some of the numbers that have come to define him:

4: Four wushu national championships in his native Russia. Magomedsharipov honed his craft by joining the Pyat Storon Sveta club and remained at its boarding school for six years.

6: Years as a professional MMA fighter. Magomedsharipov experienced his first taste of pro-level competition in Odessa, Ukraine, where he stopped Zhumageldy Zhetpisbayev with punches in the first round of their pairing at an Odessa Golden Cup event.

4: Wins without a loss to start his career. After Magomedsharipov’s triumph over Zhetpisbayev, he tallied impressive victories over Timur Bolatov, Abkerim Yunusov and Iftikhor Arbobov before submitting to an Igor Egorov armbar at ProFC 47. It remains the only blemish of his 16-fight career.

6: Victories in the Absolute Championship Berkut organization. He won the 2015 ACB featherweight grand prix in October 2015 and captured the promotion’s featherweight title with a first-round knockout of Sheikh-Magomed Arapkhanov in March of the following year.

1: Round needed to successfully defend the ACB featherweight championship. Magomedsharipov put away Valdines Silva with punches 1:54 into their encounter at ACB 45.

3: Post-fight bonuses banked in three UFC appearances. Magomedsharipov has been phenomenal in his short stay with the organization, taking “Performance of the Night” honors in his wins over Santiago and Moraes, along with a “Fight of the Night” award in his conquest of Kyle Bochniak.

17: Takedowns completed in his three UFC bouts. Magomedsharipov executed one takedown on Santiago, five on Bochniak and 11 on Moraes.

73: Inches of reach, an undeniable advantage at 145 pounds. This has served Magomedsharipov well, whether darting in to attack, parrying punches or reaching for a double-leg.