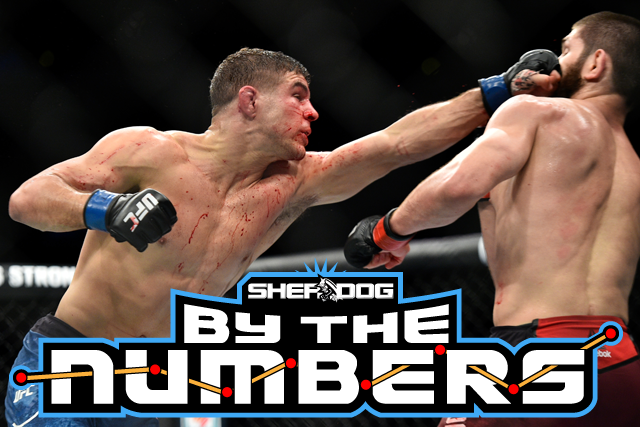 Al Iaquinta welcomed Kevin Lee to the big leagues at UFC 169. The action-packed bout needed three full rounds to crown a victor, which happened to be “Ragin’ Al.”

Now needing a good win to make a case for advancement, Iaquinta will surely come prepared to stop Lee in his tracks. The rematch will take place at the Wisconsin Entertainment and Sports Center in Milwaukee on Dec. 15. As fans await for one of the biggest scraps of the year, let’s take a look at the numbers that have shaped the career of Iaquinta.

14: Wins without a loss as an amateur. Iaquinta turned pro in February 2009, facing Mervin Rodriguez at Ring of Combat 23. He stopped Rodriguez with an anaconda choke in the first round. The Serra-Longo Fight Team standout prefers to keep the fight on the feet, and his tapout of Rodriguez remains his only submission victory to date.

7: Fights at Ring of Combat before signing with the Ultimate Fighting Championship. He gathered 5 victories, 1 defeat and 1 no contest. At ROC 37, he challenged and beat Gabriel Miglioli in just 26 seconds to capture the vacant ROC lightweight title. However in his next bout, it was snatched by Pat Audinwood.

4: Fellow contestants defeated at “The Ultimate Fighter 15” to set the stage for a finals showdown with Michael Chiesa. He triumphed over Jon Tuck, Myles Jury, Andy Ogle and Vinc Pichel, but eventually lost to Chiesa at the TV show’s live finale.

4: Takedowns landed on Ryan Couture in Iaquinta’s second UFC fight. After getting derailed by Chiesa, Iaquinta banked on his wrestling -- as well as his striking -- to edge out Couture via unanimous decision. According to Fightmetric, he also landed 80 significant strikes as opposed to Couture’s 45.

49: Significant strikes against Lee’s 39. This appeared to be pivotal to the outcome of the bout, which went to the judges’ hands, with Iaquinta winning the three-round war.

7: Wins by KO or TKO. Iaquinta has great power in his hands as evidenced by his knockout victories over Tim Sylvester, Joshua Key, Gabriel Miglioli, Rodrigo Damm, Ross Pearson, Lauzon and Sanchez.

5: Full rounds with Khabib Nurmagomedov at UFC 223. Iaquinta was a replacement for Holloway, who wasn’t allowed to compete due to his weight cutting problems. “Ragin’ Al” lost by unanimous decision, ending his unbeaten run.

4: Losses in his career. Apart from Nurmagomedov, he suffered setbacks to Mitch Clarke, Chiesa and Pat Audinwood.

31: Years of age. Iaquinta was born on April 30, 1987 in Wantagh, New York. Currently, he resides with his family in Seaford, New York.