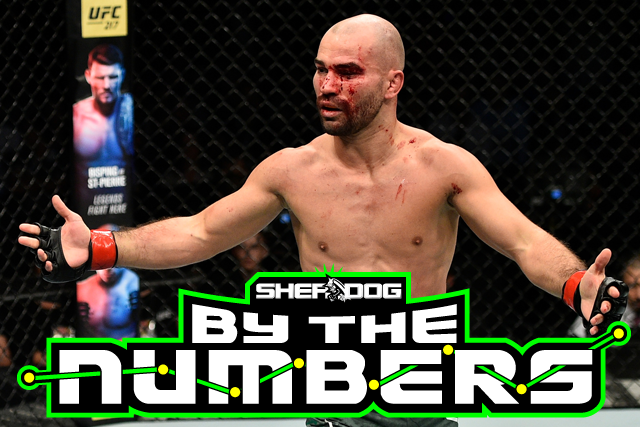 
Artem Lobov has wins over Teruto Ishihara and Chris Avila, and at one point pushed Cub Swanson to the limit. While he has had quite a tough time in the Ultimate Fighting Championship, he has proven that he can hang with the best in the division. Now it’s time to pick up steam and step up the ladder.

At UFC Fight Night 138, he will have a chance to further his résumé with a victory over Michael Johnson. They fight at the Moncton Events Centre in Moncton, New Brunswick, Canada, Saturday. As “The Russian Hammer” gets his game plan ready, learn more about him through these figures:

4: Amateur fights and went 3-1. All his three victories came by knockout.

5: Full rounds spent in his professional debut against Patrick Vickers. It happened at “Cage Wars: The Uprising” in November 2010.

2: Straight victories after losing his debut. Lobov decisioned Dave Hill at Cage Warriors 41. Then, he fought at “OMMAC 10: Step in the Arena” and submitted Uche Ihiekwe in the third round.

4: Back-to-back losses in his career. While he has had some low points in his MMA career, Lobov has always managed to bounce back.

3: Full rounds in a losing cause against UFC veteran and fellow “TUF” alumnus Andre Winner. He lost by unanimous decision.

8: Fights in Cage Warriors Fighting Championship, with a record of 4-4. It accounts for almost 35 percent of all his fights outside of the UFC.

3: Opponents defeated inside the “TUF” house to set a finals match with Ryan Hall. He lost in the preliminary round to Mehdi Baghdad but was brought back as an alternate. The move proved to be a good one as he went on to defeat his next three opponents -- James Jenkins, Chris Gruetzmacher and Julian Erosa.

1: UFC headliner. Lobov shared the main event with Swanson at UFC Fight Night 108. They went five full rounds, with Swanson getting his hand raised after. It wasn’t an easy win for the top featherweight though, as Lobov was a game opponent who proved that he can throw down with the best in the division. For their efforts, they earned “Fight of the Night” honors.

6: Finishes in his career. Lobov has four victories by knockout and two by submission.

2: Divisions fought in. Lobov has fought at lightweight and featherweight, the latter being his current division in the UFC.

10: Territories in which he has fought in. Lobov is a well-traveled competitor. Apart from his home country of Ireland, he has also fought in other territories such as England, Ukraine, France, Jordan, Northern Ireland, Scotland, Sweden, Poland and the United States.