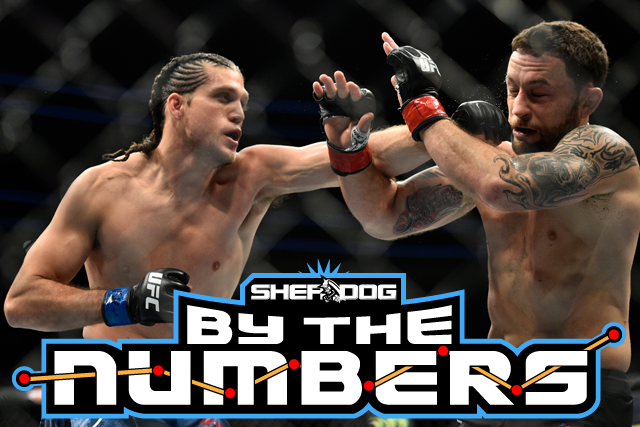 Brian Ortega is a phenomenal jiu-jitsu practitioner who has so far been extremely successful in MMA. The undefeated Mexican-American has been on a tear, beating one top contender after another, the last of which was former lightweight king, Frankie Edgar.

On Dec. 8, Ortega may just reach the pinnacle of his career when he challenges current featherweight titleholder Max Holloway at UFC 231 in Canada. As he prepares for the biggest fight of his career, ponder on the numbers that have made him the featherweight division’s No. 1 contender.

13: Years old when he started training Gracie jiu-jitsu under Rorion Gracie and his sons, Ryron, Rener and Ralek. Ortega went on to find success in countless grappling competitions and eventually become one of the finest jiu-jitsu practitioners in MMA.

17: Years old when he met boxing coach James Luhrsen, who would be pivotal in shaping his striking aptitude. Even now, Luhrsen, as well as Rener, remain a staple in Ortega’s entourage.

1: Round needed to impress in his professional MMA debut, which happened at Gladiators Challenge: Maximum Force. He stopped John Sassone by triangle choke at 1:48.

4: Bouts at a promotion called Respect in the Cage. In his third fight, Ortega won the featherweight championship opposite Carlos Garces. He defended it successfully from Thomas Guimond, ending the match with another triangle choke submission.

5: Full rounds with Keoni Koch to capture the Resurrection Fighting Alliance featherweight title. Before that championship match, Ortega tapped out Jordan Rinaldi with his signature move, the triangle choke.

4: Triangle choke submissions in MMA. Ortega earned the nickname “T-City” for his tremendous success using the said submission in various grappling tournaments. It remained his favorite move when he transitioned into MMA as it accounts for more than half of his submission victories.

1: Round needed to finish Mike de la Torre in Ortega’s Octagon debut. He choked out his opponent in the very first round. However, the decisioned was later ruled out a No Contest after the Torrance, California, native tested positive for drostanolone. He was fined $2,500 and suspended for the next nine months.

6: Takedowns allowed to Thiago Tavares in their UFC Fight Night 68 encounter, per Fightmetric. Ortega, on the other hand, wasn’t able to score a single takedown. The striking department was close with Ortega leading, 41-39. In the final round, it appeared Tavares was on his way to taking a decision victory, until “T-City” landed a massive hook to the jaw that dropped the Brazilian. Ortega followed it up with a few more punches to salvage the win via TKO.

1: Rounded needed to defeat Edgar. Ortega did what no other fighter had done, which is to stop “The Answer.” He did it with a right uppercut to signal the end at the 4:44 mark of round 1.