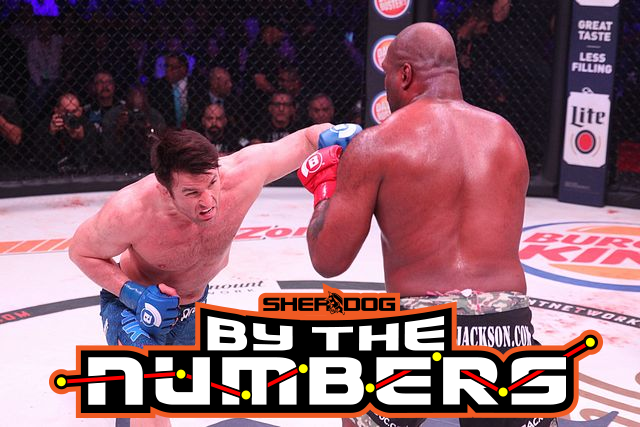 Chael Sonnen has recorded wins in two of his first three appearances since moving to Bellator MMA, including a unanimous decision over Quinton Jackson in the quarterfinals of the Bellator heavyweight grand prix. Sonnen will meet Fedor Emelianenko in the tournament semifinals in the Bellator 208 headliner on Saturday at the Nassau Veterans Memorial Colisum in Uniondale, New York.

As Sonnen makes final preparations for his showdown with Emelianenko, here are some of the numbers that have come to define him:

19: Years of age when he first fought professionally. Sonnen decisioned Ben Hailey at the Battle of Fort Vancouver on May 10, 1997. In his next outing, he faced and defeated future Ultimate Fighting Championship alum Jason Miller.

15: Wins compiled before he signed with the UFC. Sonnen went 1-2 in his first stint with the promotion.

3: Fights with Jeremy Horn. Sonnen lost all three, including an armbar submission defeat at UFC 60 -- a setback that resulted in his release.

89: Significant strikes landed against Anderson Silva in their UFC 117 headliner; Silva connected with just 29. Sonnen controlled the Brazilian on the ground and landed punches at will until “The Spider” caught him in a triangle choke in the middle of Round 5. Silva won their rematch by second-round technical knockout.

4: Appearances in World Extreme Cagefighting. Sonnen fought at WEC 12 and beat Alex Stiebling by unanimous decision. He returned at WEC 31 and lost a controversial match with Paulo Filho for the company’s middleweight title. In his next bout, he dominated the previously undefeated Bryan Baker at WEC 33 to set up a rematch with Filho. However, Filho missed weight, resulting in a non-title bout at WEC 36. Sonnen won by unanimous decision.

19: Victories by decision. Sonnen is known for grinding down his opponents and imposing his will on them. In addition to his decision victories, he has tallied seven wins by knockout and five by submission.

1: “Submission of the Night” bonus banked in the UFC. Sonnen cinched a guillotine choke on Rua in the UFC Fight Night 126 main event, earning an additional $50,000.

2: “Fight of the Night” awards earned in the UFC. Sonnen was honored for his efforts against Marquardt at UFC 109 and against Silva at UFC 117.