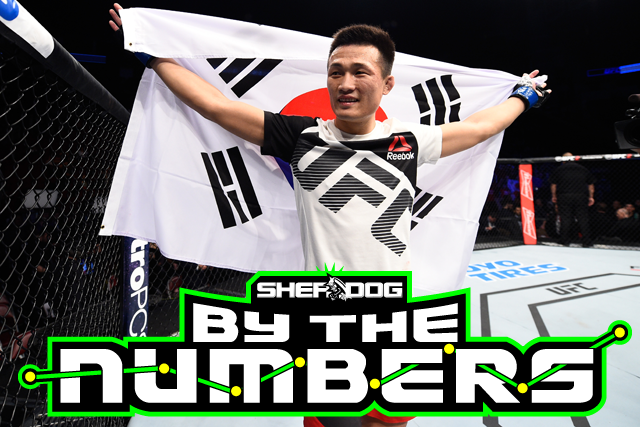 
In his first fight after completing his mandatory military service, Chan Sung Jung made sure everyone was aware of how hungry he was for competition, which was unfortunate for Dennis Bermudez, who was tasked to welcome him at UFC Fight Night 104. “The Korean Zombie” knocked him out in the first round.

Jung aims to show his firepower never waned despite the long absence when he faces Yair Rodriguez at UFC Fight Night 139. The event will take place at Pepsi Center in Denver. As he prepares for this thrilling encounter, here are some figures that have made Jung one of the most exciting fighters in all of the Ultimate Fighting Championship.

14: Years old when he started training hapkido, his first taste of martial arts. Jung was often bullied as a kid and was enrolled by his aunt after seeing enough of his predicament. Later on, he trained kickboxing, judo and jiu-jitsu.

18: Years old when he started training taekwondo. By this time, he had joined the South Korean Navy. Soon, he trained in sambo and won a tournament organized by the Korean Sambo Association.

20: Years old when he won the Pancrase Korean Neo-Blood lightweight tournament. The eight-man grand prix included In-Seok Yoo and Hyung-Geol Lee, whom he defeated in the semifinals and finals, respectively.

3: Contestants defeated to take the Korea FC 65kg tournament. He submitted all but one of his opponents on the same day.

21: Years old when he first competed outside of Korea. A year after his professional debut, Jung was tapped by Deep to appear at Deep: Gladiator opposite Pride Fighting Championships and UFC veteran, Michihiro Omigawa.

17: Seconds to beat Fanjin Son at Deep 39: Impact. The stunning knockout finish was the fastest of his young career. This personal record would be broken a few years later in a different league.

9: Wins to start his professional career. His ninth victory came at the expense of Shintaro Ishiwatari in the first round of the 2009 Sengoku Featherweight Grand Prix. However, he suffered his first loss in the next round against Masanori Kanehara.

3: Full rounds with Leonard Garcia in Jung’s World Extreme Cagefighting debut. This landmark bout earned Fight of the Night honors, and was in fact, hailed as one of the greatest fights ever. The Korean lost by a controversial split decision.

2: Losses in his WEC career. After losing to Garcia by the slimmest of margins, Jung was knocked out by George Roop at WEC 51.

2: Fights against Garcia. Jung made a major statement when he submitted Garcia via twister in their rematch at UFC Fight Night 24.

3: Wins to start his UFC career. After avenging his loss to Garcia, he stopped top-quality featherweights Mark Hominick and Dustin Poirier.

7: Seconds to knock out Hominick. The first punch Jung threw was enough to knock Hominick down. He then followed it up with a few more punches until referee Herb Dean had seen enough.

4: Rounds at the hands of then featherweight king, Jose Aldo. The end came in the fourth frame after the Brazilian unleashed a flurry of punches that were too much for Jung, who suffered a shoulder injury, to handle. After this fight, he started his mandatory military service for South Korea.