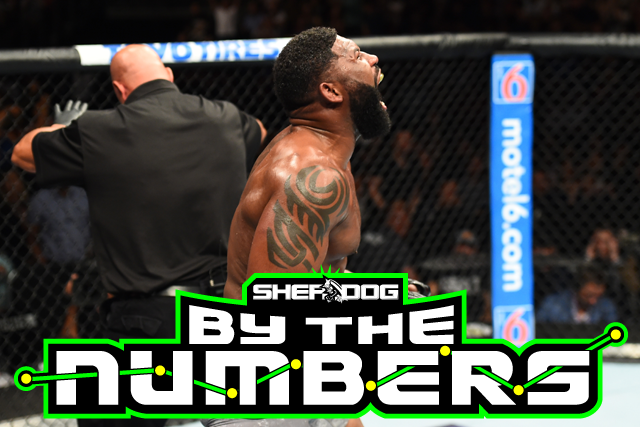 
Curtis Blaydes has been a professional mixed martial artist for only four years and yet he has asserted himself well in the big leagues. In fact, he could just be one or two victories away from challenging for the title. For his next bout, he will be facing the man who dealt him the only loss of his career in Francis Ngannou.

“Razor” has three TKO wins inside the Octagon and it would be extra satisfying to make it four at the expense of his previous conqueror. The two heavy hitters will headline UFC Fight Night 141, which takes place at the Cadillac Arena in Beijing, China. Let these numbers prove why Blaydes is worthy of a title shot.


Advertisement
44: Matches without a loss wrestling in his senior year for the De La Salle Institute. With this impressive feat, Blaydes won the state title.

121: Total takedowns scored in all his four years in high school. In all, he had a record of 95-18. Blaydes then wrestled with a full scholarship at Northern Illinois University before moving to Harper College, where he won an NJCAA championship.

8: Wins without a loss as an amateur MMA fighter before turning pro in 2014. His first taste of professional MMA competition happened at XFO 51, where he won by TKO over Lorenzo Hood at 1:42 of the first round.

5: Straights wins without a loss before getting signed by the Ultimate Fighting Championship. All these victories came by TKO. Apart from Hood, he also knocked out William Baptiste, Brad Faylor, Allen Crowder and Luis Cortez. The first two came in the first round.

2: Rounds with Ngannou, who scored a win over him via doctor’s stoppage. Blaydes entered the UFC with a ton of confidence given the power in his hands, which was backed by a perfect record. But at UFC Fight Night 86, he was stopped by Ngannou.

10: Takedowns scored on Mark Hunt. Apart from leading in the striking department, Blaydes also landed takedowns on “The Super Samoan” almost at will.

5: Fights were he scored at least four takedowns. Blaydes tallied 10 on Hunt, eight on Adam Milstead, five on Cody East and four each on Overeem and Aleksei Oleynik. He didn’t score a single takedown on Daniel Omielanczuk in a bout he convincingly won and landed two on Ngannou although in a losing effort.

2: Performance of the Night awards. Blaydes went home from UFC 225 with $50,000 in bonus money after his thrilling knockout of Overeem. He peppered the veteran with strikes that culminated with elbows, ending the match at 2:56 of the third round. But way before that, he received Performance of the Night honors for letting Cody East eat more destructive elbows at UFC Fight Night 96.

27: Years of age. Without question, Blaydes is one of the most promising heavyweights in the UFC today. The Naperville, Illinois, native was born on Feb. 18, 1991.
Related Articles
Latest News
ALLUFCBELLATORPFLONE