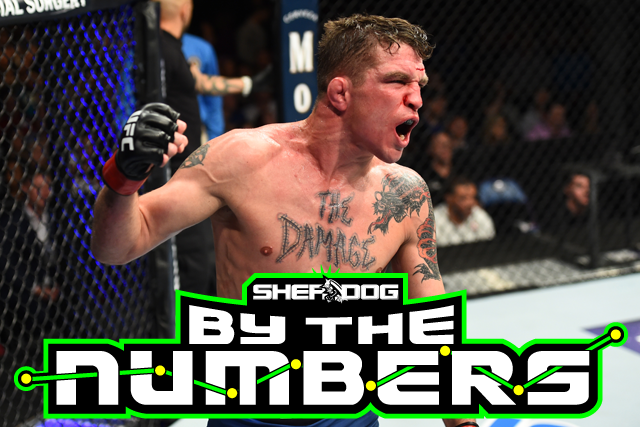 
Darren Elkins is easily one of the more prolific and resilient featherweights in the Ultimate Fighting Championship. He has lost only to quality opponents and went on a six-fighting winning streak before getting derailed by Alexander Volkanovski.

Expect “The Damage” to do everything in his power to get back on track at the expense of Ricardo Lamas, whom he will face in Buenos Aires, Argentina, at UFC Fight Night 140. As he gets ready for this tough task, read about the numbers that have made him a truly dangerous veteran.

13: Seconds lasted in his first defeat. Elkins came into his fight with Ted Worthington with a load of confidence after winning his first eight bouts. Unfortunately, he was humbled by the much more experienced Worthington, who won via TKO.

44: Seconds needed to defeat veteran Duane Ludwig, who suffered an ankle injury following a takedown from Elkins. It happened at UFC on Versus 1.

41: Seconds given up to Charles Oliveira in the second installment of UFC on Versus. Elkins tapped to a perfectly executed armbar from the Brazilian jiu-jitsu black belt. The loss would become a turning point in the American’s career.

5: Straight victories after the loss to Oliveira. Elkins moved down to featherweight, which proved to be a great move. Of the five wins, one came by TKO and the rest were by decision.

1: Round spent with Chad Mendes, his first high-profile opponent. Unfortunately, Elkins didn’t see the end of the round after getting knocked out early in the first round.

7: Straight fights that ended in a decision, following the loss to Mendes. Elkins went 5-2 and was left hungry for a stoppage.

28: Significant strikes against Mirsad Bektic’s 60, per Fightmetric. Bektic was way ahead on points, but midway into the final round, Elkins turned things around when he landed a right hand and a head kick as his opponent was trying to stand up, effectively ending the fight at 3:19. Many labeled it the comeback of the year.

18: Significant strikes against Michael Johnson’s 45. In another brilliant comeback performance, Elkins choked out Johnson in the second round after getting beaten up in the opening frame.

2: Performance of the Night awards. His thrilling come-from-behind victories over Bektic and Johnson earned him $100,000 in bonus money.

4: UFC Fights where he scored at least five takedowns. There are more credentialed wrestlers at 145 than Elkins, but he sure has one of the best for MMA. Elkins landed seven each on Chas Skelly and Rob Whiteford, six on Steven Siler and five on Godofredo Castro. In all, he has 39 takedowns inside the Octagon.

6: Victories by knockout. In the UFC, he starched Bektic, Ludwig and Anthony Carvalho.

6: Victories by submission. His lone submission victim inside the Octagon is Johnson.