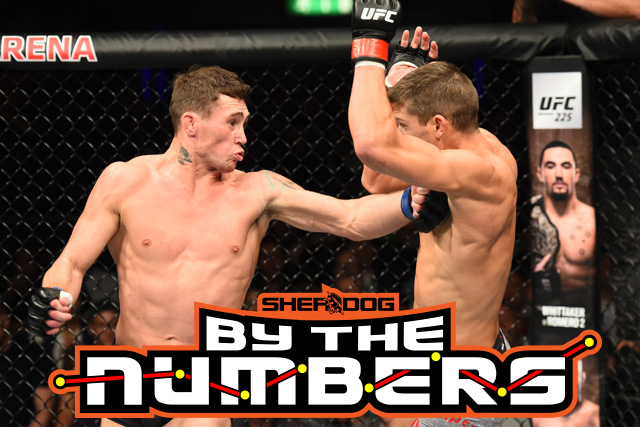 Darren Till received some flak after being awarded a title shot, his detractors pointing to a lack of substantial merit and his propensity for missing weight. Still, there can be no denying his effectiveness inside the Octagon. The undefeated Till will challenge Tyron Woodley for the Ultimate Fighting Championship welterweight crown in the UFC 228 main event this Saturday at the American Airlines Center in Las Vegas.

As Till’s clash with Woodley nears, here are some of the numbers that have come to define the 25-year-old Englishman:

12: Years of age when he started his formal muay Thai training. Till progressed quickly and was already displaying his skills at the professional level by the time he was 15. Two years later, he transitioned to MMA with Team Kaobon.

3: Wins without a loss as an amateur. All of Till’s fights took place in Brazil, where he moved to further his luta livre skills under former Team Kaobon coach Marcelo Brigadiero and, ultimately, pursue an MMA career.

8: Fights in 2013. It remains Till’s most active year to date. He started his campaign with a decision over Luciano Oliveira Ribeiro on Feb. 23 and ended it with a victory over Cristiano Marquesotti on Nov. 9.

10: Consecutive bouts in Brazil before he was invited to Argentina for his first fight outside of his adopted homeland. Till took a three-round decision from Guillermo Martinez Ayme at an Arena Tour MMA event in Buenos Aires.

5: Years as a professional. Till competed in a number of regional organizations before signing with the UFC in May 2015.

6: UFC appearances under his belt. Till has piled up a 5-0-1 record, with notable victories over Donald Cerrone and Stephen Thompson.

83: Percent of takedowns defended, per UFC statistics. Till will have his work cut out for him against Woodley, who was a two-time NCAA All-American at the University of Missouri.

2: Wins by submission on his resume. While Till prefers to keep the fight standing, he has shown flashes of his grappling brilliance. The luta livre purple belt tapped the aforementioned Marquesotti with an inverted triangle choke and Sergio Matias with a toe hold.

1: “Performance of the Night” bonus banked as a member of the UFC roster. Till was recognized for his efforts against Cerrone on Oct. 21 at the Ergo Arena in Gdansk, Poland.

1: “Fight of the Night” bonus earned under the UFC flag. Till pocketed an additional $50,000 following his back-and-forth battle with Nicolas Dalby at UFC Fight Night 76 on Oct. 24, 2015. It ended in a majority draw.