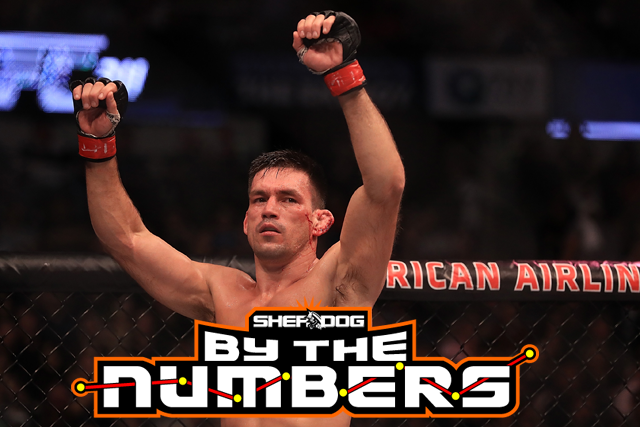 Despite dropping his last three outings, Demian Maia still sits at No. 8 in the Ultimate Fighting Championship welterweight rankings. That’s mainly because of the quality of opponents he has faced. At UFC Fight Night 144, he’ll look to add a dangerous American prospect to his résumé.

Does the 41-year-old submission specialist still have what it takes to compete at the highest levels of the sport? We find out on Feb. 2 when he faces Lyman Good. Before then, let these numbers remind you of the Brazilian warrior's cage and mat brilliance.

19: Years old when he started training Brazilian jiu-jitsu, which was introduced to him by his cousin. After only four years and seven months, he earned his black belt under Fabio Gurgel. Before jiu-jitsu, he also tried his hand at several martial arts, including judo, kung-fu and karate.

6: Wins without a loss before the UFC took notice. Maia fought mostly in his native Brazil and at one point joined a tournament called Super Challenge 1, where he beat three opponents in one night to become champion at the 86-kilogram division. In his sixth bout, he fought for the first time in the United States, defeating Ryan Stout by TKO.

35: Seconds was his fastest victory. Maia choked out Fabio Nascimento in the finals of Super Challenge 1. He won two additional fights that ended in under a minute, as he made quick work of Raul Sosa and Dong Hyun Kim.

5: Submission finishes to start his UFC career. All were against quality opposition, as the Brazilian defeated Ryan Jensen, Ed Herman, Jason MacDonald, Nate Quarry and Chael Sonnen. Maia quickly rose to the rankings and was given Nate Marquardt, a former title contender, for his next fight. Unfortunately for Maia, the American dealt him the first loss of his career.

60: Takedowns scored inside the Octagon. What’s even more impressive is the fact that he scored his most number of takedowns in a single fight opposite NCAA Division 1 wrestler, Jon Fitch. In all, he has attempted to bring the fight to the floor 238 times inside the Octagon.

43: Percent striking accuracy. Maia has shown immense improvement in his standup game. While he started as one of mixed martial art’s specialists, he’s now comfortable throwing crisp combinations. In his entire UFC stint, Maia has connected on 652 of 1,501 significant strikes.

9: Losses in his career. In his 34-fight career, Maia has faced some of the best in two different divisions. Apart from Marquardt, he has only lost to Anderson Silva, Mark Munoz, Chris Weidman, Jake Shields, Rory MacDonald, Tyron Woodley, Colby Covington and Kamaru Usman.

2: Times he fought for UFC gold. He went five full rounds with then middleweight king Anderson Silva at UFC 112 and lost by unanimous decision. After dropping to welterweight, Maia was still a formidable contender. He went on a seven-fight winning streak and was rewarded with a shot at Tyron Woodley’s welterweight belt. They clashed at UFC 214, but Maia dropped another unanimous decision.